Zoey is a millennial woman in San Francisco who wakes up one day to find that she has an unusual ability: she can hear the songs that go through the heads of the people around her. What makes this ability even more powerful is that the songs she hears are what she dubs their “heart songs” – the songs that they are thinking about because the tunes express their innermost feelings.

That unique gift, and the universe of wonderful people surrounding her vibrant spirit, forms the heart of the terrific new NBC musical comedy series “Zoey’s Extraordinary Playlist.” Packed with elaborate musical numbers yet still possessing a huge heart, the show represents a bold stylistic move that makes it one of very few musical comedies in TV history. The reason for that is that the genre is expensive to pull off well, but “Zoey’s” succeeds in spades.

Zoey (Jane Levy, in a starmaking role) is a computer programming wizard who suddenly is able to hear others sing around her, which she discovers while walking to work and overhears a woman singing a sad song even though her lips aren’t even moving. As she keeps walking, she can hear several other women ogling a guy while singing “Whatta Man” by 1990s rap stars Salt N Pepa, and then is chased through the streets of San Francisco by dozens of people singing and dancing their way through the Beatles’ “Help!”

Zoey has plenty of other things to contend with besides her newfound ear for what she calls people’s “heart songs,” with best friend Max (Broadway star Skylar Astin) secretly in love with her (a fact that’s revealed in his stellar rendition of the Partridge Family’s “I Think I Love You.” Meanwhile, Zoey pines for Simon, a quiet African-American colleague whose rendition of Tears for Fears’ 1980s classic “Mad World” hides the fact he’s devastated by the loss of his father. 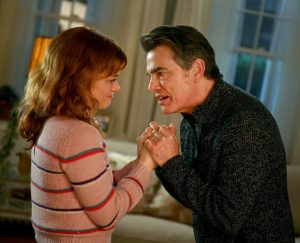 Zoey feels Simon’s pain because her own father Mitch (Peter Gallagher) is dying from Alzheimer’s, which has left him unable to talk or communicate except – you guessed it – via his own “heart songs.” With her mother (Mary Steenburgen) putting on a happy face while masking a deep sadness at the loss of her love, Mitch’s rendition of Cyndi Lauper’s “True Colors” is powerful, as Gallagher explodes into full-throated singing and dancing that only Zoey can see and hear. It’s a conceit that creates a beautiful emotional subtext to the entire series.

Lauren Graham of “Gilmore Girls” fame plays Zoey’s boss Joan with fiery comic zest, a woman who’s had to be hell on wheels throughout her career and is now slowly burning out and hoping to pass the reins of her company slowly to Zoe. Graham displays fun comedy acting chops, but episode 3’s focus on her contained the series’ only annoying songs so far, thanks to her annoying renditions of the Rolling Stones’ “Satisfaction,” Miley Cyrus’ “Wrecking Ball” and Katy Perry’s “Roar.”

That list of song titles alone should provide an indication of how impressively eclectic the series playlist actually is. And the fourth episode provided a particularly stunning storyline, as it followed Zoey’s discovery that her downstairs neighbor/apartment manager Mo (Alex Newell) is a “gender fluid” man hiding the fact that he’s a woman at home and nearly everywhere she goes in public, but a man when he appears singing in his church choir.

This may sound like the show went off the rails and into shoving an LGBT agenda down viewers’ throats, but in fact (and I’m not a politically correct apologist for that “community”) the episode becomes a touching exploration of faith, acceptance and being true to oneself. One surprising aspect is that Zoey admits that – like far too many millennials – she has been raised without any strong sense of God, much less a relationship with Him.

With her father a lapsed Catholic and mother describing herself as a “seeker,” Zoey dives in on religion herself, winding up quoting Scripture and by the end, jumping to her feet with the rest of Mo’s congregation to back him in singing a joyous rendition of “This Little Light of Mine”. Mo also delivers a stellar “Amazing Grace” earlier in the episode, which leaves me with the question: when was the last time a major network’s prime time show featured classic hymns, respected major characters’ quest for peace with God, and allowed young adult characters to pursue love relationships without requiring them to sleep around?

“Zoey” is slowly exploring the question of whether its heroine’s gift is a means of God expressing a deeper message to her. It’s a shame that the show airs opposite CBS’ religious winner “God Friended Me,” as these are both series that offer refreshing looks at the spiritual without becoming sacrilegious.

I highly recommend that you add “Zoey’s Extraordinary Playlist” (7 CST/8 PST and EST on NBC) to your own playlist.