As we see America’s leaders start slowly allowing the country back to normal, some independent theatres are starting screenings again. But for the most part, we’re still stuck having to entertain ourselves at home – and with that in mind, here’s another round of some eclectic choices currently streaming on Netflix that should offer something for nearly everyone to enjoy. 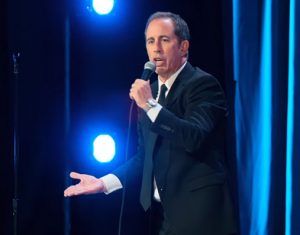 Jerry Seinfeld is probably the most universally beloved comedian of our times, and Netflix is currently offering his first special in over 20 years with “23 Hours to Kill.” He finds a whole new batch of everyday-life aspects that drive him (and no doubt, the rest of us) nuts – including the absurdity of the US Post Office in the age of e-mail, the ridiculous extent we’ve let iPhones take over our lives and the thin line between things we call “great” and those we consider awful. A bonus for seniors lies in the fact that Jerry is 65 now and dishes out some hilarious riffs on how great life is in your sixties. This is a PG-rated special with Seinfeld’s usual class and sophistication, and well worth having some laughs.

One of the more unusual movies to ever win Best Picture had to be “The Artist,” which stood out in 2011 as a French-made, black-and-white homage to silent films. Its tale of an egomaniacal film star who develops a relationship with a young dancer against the backdrop of Hollywood’s silent era won five Oscars, including Best Director and Best Actor, but has largely become forgotten. Now is a great time to either give it a first look (the film wasn’t a blockbuster, making only $44 million in the US) or revisit it. 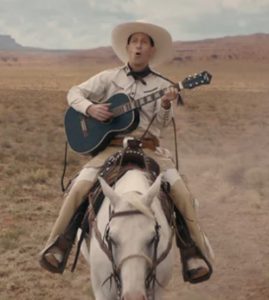 The Ballad of Buster Scruggs

In the past couple of years, Netflix has started making some great movies of its own, and “The Ballad of Buster Scruggs” – an anthology of six Western-set tales made by the always-unique brother team of Joel and Ethan Coen that are all unpredictable and span a wide emotional range – was a great coup.  This brilliant film works as comedy, drama, and even a commentary on the Coens themselves. There are a few somewhat-gruesome quick moments of Old West death mixed in, but nothing to truly offend anyone. Don’t miss it.

Another Oscar-honored film that has been somewhat forgotten, like “The Artist,” is 2008’s “The Curious Case of Benjamin Button.” David Fincher directed this loose adaptation of an F. Scott Fitzgerald story about a man who ages in reverse. Brad Pitt gives one of his most subtle performances as the title character, but it’s Fincher’s lyrical storytelling approach that really makes the film shine. It’s not talked about much today but actually landed 13 Oscar nominations, including Best Picture, winning three. 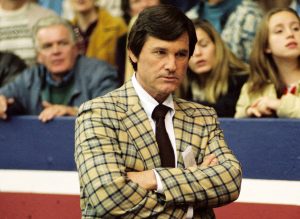 There are so few great sports movies that audiences really embrace the ones that do come along, like “Miracle,” the underrated 2004 film from Gavin O’Connor. Kurt Russell gives a truly fantastic performance as Herb Brooks, the coach of the U.S. Men’s Hockey team that made everyone believe in miracles when they defeated their heavily favored Russian counterparts in the 1980 Winter Olympics. This is a film that will pump up your emotions and get you out of the lockdown doldrums, especially if you’re a sports fan jonesing for some competition while major sports are shut down.

There may not be baseball during COVID-19 but there are still baseball movies, and “The Natural” is one of the best baseball movies out there. Barry Levinson directed this adaptation of the Bernard Malamud novel that stars Robert Redford as Roy Hobbs, a man with a natural swing behind the plate who becomes a star out of nowhere for one shining season despite being at an age (Redford was 48 at its release) where he might normally be considered an over-the-hill athlete. It’s one of Redford’s most charming and memorable performances and has some fantastic use of slow-motion heroics to go with a beautiful score by Randy Newman. 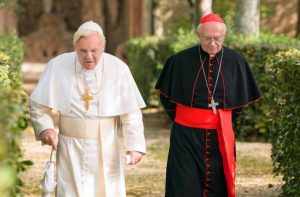 Finally, I’m recommending “The Two Popes,” a movie that many of you might already have seen, as a prominent Catholic-themed film. Fernando Meirelles directs this fascinating film that speculates on the relationship between Jonathan Pryce as Pope Francis and Anthony Hopkins as Pope Benedict. The majority of Anthony McCarten’s script is a conversation between the two in the days when Pope Benedict handed off papal duties to Pope Francis, using that context to examine modern faith and how it has to change in the new century. Hopkins is very good but the real draw here is arguably the best (and Oscar-nominated) performance of Pryce’s remarkable career.