It’s not often that network television offers a serious exploration of matters of faith, good and evil, and the presence of the devil in modern society. The new CBS drama series “Evil,” which debuted Sept. 26, is a rare and mostly refreshing exception: an intensely thoughtful portrayal of a Catholic seminarian and a lapsed-Catholic clinical psychologist who team up to investigate possible possessions and miracles. 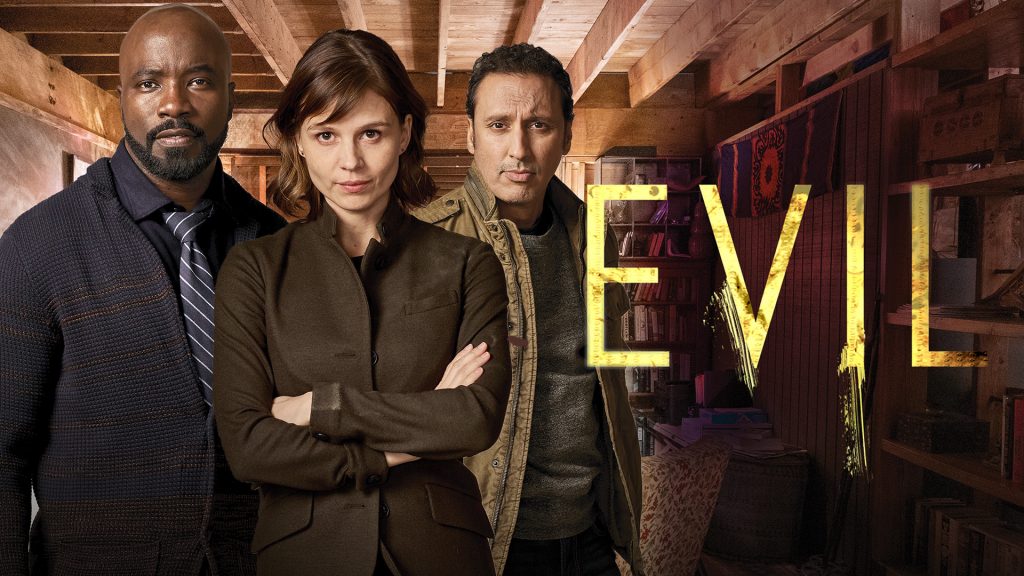 The two are brought together when Kristen quits her job with the Queens district attorney’s office in an ethical dispute and David realizes that she would be an incredible asset to team up with, bringing scientific and faith-based insights together. David also works with a skeptical high-tech expert named Ben (Aasif Mandvi), whose job is to analyze sound and video recordings to of seeming supernatural occurrences and determine if they were doctored.

Their first case involves determining if a vicious serial killer named Orson was compelled by demonic possession, or in control of his faculties.  At the same time, they’re beset with the intrusive presence of Dr. Leland Townsend (Michael Emerson), who is a fellow psychologist but always takes the side of evil. David has battled him many times and has come to believe that Townsend is a demon in human form, and at one point Townsend taunts a skeptical Kristen by stating his goal is to set as many evildoers free, as possible, upon the world.

As they delve deeper into their investigation, David and Kristen’s complexities are revealed. David prays the Rosary intensely in private late at night, both in his apartment and while jogging through the New York City streets – yet he freezes upon seeing a nightclub where nubile young women are entering. Back in his apartment, he is seen praying Hail Mary’s with life or death fervor as Townsend sits in a chair behind him, taunting him about the fleshly desires he prays to keep at bay.

This may seem like an odd conceit, but I consulted with a priest friend who was a ladies’ man in his pre-clergy life and he found the concept of Townsend’s taunts a brilliant metaphor for the celibacy struggles some priests battle. Indeed, the portrayal of David is deeply engaging because he’s not a happy-go-lucky Bing Crosby of the 1940s classic “Going My Way,” but rather a relatable human being who is handsome, human and quite possibly a character who will draw even non-believing viewers into respect for Catholic clergy at a time it’s sorely needed.

However, at the same time, the portrayal of David has some potential trouble spots. Allusions are made throughout the first two episodes. He’s vague yet tormented by memories of a past girlfriend or wife named Julia who died, and it turns out his struggle wasn’t simply with celibacy on that first run past the club. Rather, he’s secretly buying psychedelic drugs from a dealer there.

The second episode ends with a bizarre but fascinating scene in which he drifts into altered consciousness after drinking a tea with one of the drugs he bought and sees visions of a glowing orb, questioning “Where are you, God?” and finally, “Julia?”

I am hopeful that “Evil” is showing such weaknesses as a means of showing that even clergy struggle with the same things as laypeople, while keeping David firmly on the side of good in his work. Loneliness and temptation don’t go away the moment one enlists in God’s Army, and even Jesus had his human moments of struggle at Gethsemane and while tempted by the devil in the desert.

Meanwhile, Kristen has issues of her own. The mother of a young daughter whose heart condition is likely to kill her by 20, she wants to combatively claim she’s too smart for anything that can’t be scientifically proven. But the more she works with David, the more it’s clear that she is being swayed back into the Catholic beliefs she held as a child.

Just as David is beset by Leland Townsend as the devil on his shoulder, Kristen keeps having terrible night terrors – nightmares that cause sleep paralysis and make her feel genuinely in danger from a pitch-black demon named George. At first, she manages to will George away from threatening her as she sleeps, but soon she’s finding that her young daughter is also threatened by him and that she may have to turn to God for the help she needs to save them both.

“Evil” is unflinching in the grotesqueness of George and haunting in its use of Townsend, showing that demons beset us all in various ways. The first episode involving serial killer Orson has some shocking violence in its opening moments before shifting to psychological scares, but the quick edits make the shots gasp-worthy by leaving Orson’s killings largely in the viewer’s active imaginations.

The second episode covers the exploration of a seeming miracle in which a teenage female athlete sprang awake in a morgue 177 minutes after being declared dead. Another woman in the same hospital had died an hour before and appears in security video to have appeared angelically floating above the girl as doctors fought to revive her.

It is up to David, Kristen and Ben to figure out if the girl was revived by miracle or a medical abnormality, while discerning if the death of the other woman was connected. The ensuing mystery is as compelling as the investigation of serial killer Orson’s motivations in the first episode, showing that “Evil” will be compelling both in its handling of possession and miracles.

There are no simple, pat answers in each episode, making it a rare show that should spark discussion among viewers – and the fact that those discussions will likely involve faith is a real positive. A discussion between David and Kristen in the second episode is one of the most moving and thoughtful explorations of these issues that I’ve ever seen in an entertainment.

Co-creator Robert King is described on his Wikipedia page as being Catholic and having attended Catholic schools growing up. His marriage to writing partner Michelle has lasted over three decades, so it appears they have their heads on straight and here’s hoping for the best.

“Evil” is definitely not for young children, fully earning its TV14 rating that’s akin to the movie ratings system’s PG-13. Catholic teens and adults should find it a fascinating watch, however, and aside from the frightening elements and glimpses of violence the show presents no morally questionable elements. You’ll likely find that in this case, “Evil” appears to be a source of goodness.