As the Rotten Tomatoes-approved film critic of the Pasadena Weekly from July 2009-August 2019, I saw and reviewed hundreds of movies as they were ideally meant to be presented: in movie theatres. But now that two of the nation’s largest theatre chains, AMC and Regal, have agreed to close for six to 12 weeks apiece to comply with the social distancing policies wrought by the Coronavirus pandemic, our options have shifted into watching movies at home on DVDs, Blu-Rays and streaming services.

My column Viral Videos will try to help you find a mix of past classics, cult classics, blockbuster favorites and overlooked gems that can keep your mind off of the news and away from thinking of just how bored you are while on lockdown. I’ll try to present three movies a day, five days a week, in categories like comedies or romantic comedies, classics, thrillers, and the like- with today’s opening trio being John Hughes classics that are uniquely appropriate for our national mood.

I’ve picked Hughes films because he was my personal favorite filmmaker ever, and because his populist approach ensures that almost everyone can enjoy these.

First up is Ferris Bueller’s Day Off, the ultimate ode to leisure (its ad tagline was “Leisure Rules”) as we follow the world’s most popular high school student, Ferris Bueller (Matthew Broderick), navigate a day of playing hooky alongside his girlfriend Sloane (Mia Sara) and beleaguered best friend Cameron (Alan Ruck) while evading capture by his high school principal (Jeffrey Jones). This 1986 gem might appear to be goofy teen-movie fluff, but its unabashedly joyful, life-embracing spirit and underlying message of living life happily even in the face of oppression (Cameron’s unseen father is an emotionally distant, abusive jerk) garnered it both perennial popularity as well as a prestigious spot as one of the 600 or so greatest American movies ever on the National Film Registry. 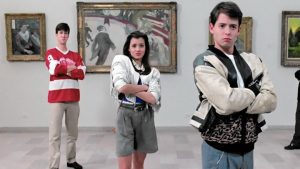 You can stream it currently on Netflix if you’re not one of the millions who own the DVD/Blu-ray. Cue it up in some form and you’ll find yourself smiling and laughing from start to finish, and likely daydreaming about what favorite things you’ll do on the first day we’re allowed back to normal life.

Next, I recommend National Lampoon’s Vacation, the first of three “Vacation” movies that Hughes wrote following the misadventures of the Griswold clan from Chicago. This marked his Hollywood breakthrough after a successful career in advertising and then humor writing with the Lampoon, and finds a thoroughly goofy charm in the pitch-perfect casting of Chevy Chase as well-meaning but often clueless father Clark Griswold. 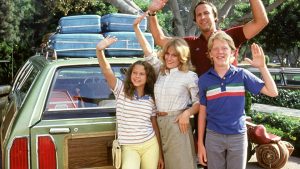 Clark takes his family on a two-week road trip from Chicago to Los Angeles en route to a planned triumphant climax at an amusement park called Wally World. Anyone with a sense of humor in the past 36 years since its 1983 release probably knows the twist at the end, but it’s still funny, as are the many side gags along the way. It’ll get your mind out of your cramped home and out on the open road.

Beverly D’Angelo is a dreamboat suburban wife Ellen who’s also a perfect comic foil to Chase, while Anthony Michael Hall does a great job as his teen son Rusty, Randy Quaid has gonzo comic form as Ellen’s Cousin Eddie and Imogene Coca is pure gold as the obnoxious Aunt Edna. This is a winner through and through, and can also provide plenty of fun in tandem with its sequels European Vacation (the weakest of the three, but still with enough laughs to make it worthwhile) and the superior classic Christmas Vacation. The first “Vacation” was rated R, but with just a couple of F words and a quick shot of D’Angelo’s breasts, it would have been rated PG-13 under the new rating if released just a year later. It’s rentable via IMDb and Amazon for $3.99.

Lastly, I’m recommending Home Alone, the 1990 Christmas classic that became the most successful comedy of all time with a whopping $286 million gross (about $400 million in today’s dollars, and at ticket prices less than $10 to boot). The story of a precocious kid named Kevin McAllister (played by the magically charismatic Macaulay Culkin) who is accidentally left home alone by his family amid their harried rush to a Christmas vacation in Paris and has to do battle with two inept robbers (the comedy dream team of Joe Pesci and Daniel Stern), this combined heartfelt moments with some of the greatest slapstick comedy ever committed to film. 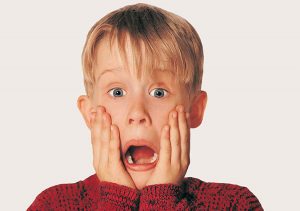 I’ll never forget audiences cheering the final battle royale with the crooks at an advance preview screening as if they were watching a down-to-the-wire Super Bowl game. But the real reason this is perfect for our current national moment is that it’s a film you can enjoy whether home alone or with family and friends of any generation. It’ll make you laugh, maybe even shed a tear a little, and just feel good to be human. It’s also rentable on IMDb and Amazon Prime for $3.99.