With Holy Week upon us, everyone’s minds are on the story of Jesus’ crucifixion, death and Resurrection – the three incidents that are at the core of the message of salvation offered by faith in Christ. And so it’s fitting that this week, we are spotlighting a wonderful new film that’s available on the Discovery Plus streaming platform (which has a free 7-day trial before charging $4.99 a month) called “Resurrection,” about these powerful events.

Produced by Roma Downey – a veteran Catholic actress who made her name as a star of the 1990s faith-based TV series “Touched by an Angel” before evolving into producing and starring in a vast array of family-friendly productions – and her mega-producer husband Mark Burnett, “Resurrection” is a faithful recreation of Jesus’ sacrifice on the cross and his emergence from the dead.

“Resurrection” is an entertaining, straightforward movie presentation of the Passion of the Christ, and is exciting with jeopardy throughout the movie. It is very careful about not being too graphic, although some may feel that it may err only in the revisionist but not irreverent diversity of the apostles. 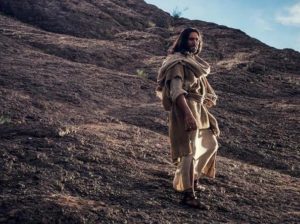 “Resurrection” streaming on Discovery Plus

The movie starts with emphasizing Roman power in Israel and Jerusalem. Quickly, it moves to Jesus’ arrest, Caiaphas asking Jesus if He’s the Messiah, and Jesus responding, “And Jesus said, I am, and you shall see the Son of man sitting on the right hand of power, and coming in the clouds of heaven,” The Pharisees rip their clothes in horror. In the crowd in the courtyard, Peter denies Jesus, as Jesus told him he would.

Throughout this process, the Jewish leaders have convinced Pontius Pilate to go along with their agenda. Pilate is presented with two appeals while Jesus is dying. One is from Caiaphas to station guards at the tomb with a large stone and a Roman seal on it to make sure no one steal Jesus’ body. The other is from Joseph of Arimathea to take Jesus’ body and bury Jesus in Joseph’s own tomb.

With Jesus’ death on the cross, there is a massive earthquake.  Joseph of Arimathea takes Mary, Mary Magdalene, John, and others with the Jesus’ body to Joseph’s tomb, where they wash and cover Jesus with myrrh and a linen cloth.

The story then shifts to focus on the Apostle John, Mary Magdalen and Mary, the mother of Jesus. All are trying to figure out what to do now. Mary, the mother of Jesus, keeps telling them that Jesus said He will rise again in three days. “Don’t you believe this?” she asks.
When the apostle’s return, John tells them the backstory of the scourging and the mocking of Jesus.

Joseph of Arimathea meets with Caiaphas. Caiaphas is angry, because, by burying Jesus in a rich man’s tomb, Joseph helped fulfill a prophecy in Isaiah about the Messiah.
After three days of the apostles arguing about whether they should leave Jerusalem, there is another earthquake, an angel descends to the tomb, breaks the seal and moves he rock while the guards are immobilized.

After the empty tomb, Caiaphas gives the two Jewish guards money to lie and claim the apostles stole the body. Pilate on the other hand arrests the Roman guards and has them killed. Then, he sends his Centurion with troops to wipe out all the apostles.

Meanwhile, Mary Magdalene visits the tomb, finds it empty and runs to tells John and Peter. They come to view the empty tomb for themselves. After they leave, Mary sees Jesus and reports back to the apostles, but they don’t believe her. Jesus appears to the apostles, but Thomas isn’t there; so, Thomas doubts. A week later, Jesus appears to Thomas, and Thomas exclaims, “My Lord and my God!”

The apostles barely escape Jerusalem the Romans to Galilee, where they return to fishing. Jesus appears on the shore and tells them to cast the net on the right side, and they recognize Him. He tells them to go to Jerusalem to wait to be filled with the Holy Spirit. They return to Jerusalem. Pentecost occurs, and they are empowered by the Holy Spirit to preach the Good News and do the miracles that Jesus did.  Peter and John are arrested by Caiaphas as the power of the Gospel is going forth. Will they be released?

The filmmakers of “Resurrection” are to be praised for making an entertaining version of the Passion and the Resurrection. They have done a good job of making it exciting, while keeping close to the Gospel story. Of course, there could be criticism of what they left out or of the casting or of the way they portray the Pharisees. However, anytime you make a movie from a historical document, you have to make tough choices to make the story entertaining. In other words, there are some Bible passages that would have clarified the theology in a longer movie. Regardless, I recommend for its biblically faithful, dramatic presentation in a movie that the whole family can watch together before enjoying ABC’s annual Easter night showing of “The Ten Commandments.”