Jim and I were married 34 years ago on a day when it rained in biblical proportions. A canopy of umbrellas hovered over me and my wedding gown as I was swept up over the puddles by a protective entourage of family and friends. They covered me from my home to the church, from the church to the limo and from the limo to the reception. From there on, it was Jim’s job. 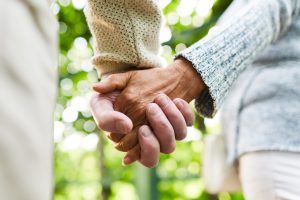 This was not to be the last time in our marriage that I required shelter from the storm but I certainly stopped worrying about getting wet. Rain, after all, brings the promise of new life as it did on that day 34 years ago.

I had met Jim just a year earlier and within six months we were engaged. His heroic arrival at a party one night signaled the end of a romantic draught in my postcollegiate life. He was a rising young executive with a promising future as a taxation planner for nonprofit organizations. As a PR gal, I wasn’t sure what that meant, but I was drawn to his casual charm and comfortable confidence – qualities that would remain the hallmark of his demeanor as a true Catholic gentleman. Instantly, Jim and I fell in love with each other and with our vision of a future together.

That vision materialized into three robust sons who became my full time occupation, affecting dramatic changes to both of our lives. At the end of my first pregnancy, my feet had permanently grown from a size 9 to a 10, rendering my premarital collection of Charles Jordon shoes obsolete. That was just the beginning of my transformation from a sharp and polished professional babe into a slightly sloppy domestic worker with the faint smell of throw up. But in those early days of being parents, Jim and I happily recognized that we were revealing our true selves to each other. I was Mom and he was Dad. We were comfortable being a family and our sons became the driving force in our lives. Frank arrived first, then Nick and finally Charlie, each boy distinctly different and yet together we five became one.

While Jim and I were not obsessive about our children, we were obsessive about being a family. We entertained as a family, attended Sunday Mass as a family, traveled as a family, and felt most complete as a family. Was this unhealthy? Modern thinking encourages husbands and wives to demand time apart from their children, escape to romantic hideaways and schedule weekly dinner dates for two. We never felt that calling. Sure, we enjoyed a few anniversary trips alone and went out with other grown ups, but we never forced it or felt deprived by a lack of it. Was I dull to think that a perfect date was the five of us huddled on the couch with a take out dinner and a good movie? Was it wrong that Jim’s idea of heaven on earth was mustering his wife and sons into the Suburban and heading off to find a remote fishing hole in Wyoming? It suited us.

But somewhere between the last bout of chicken pox and the first beer, the boys grew up. And, one day, Charlie, my baby, nearly 6 foot four, came to me with his college applications. Jim and I were fast approaching the dubious status of “empty nesters.”

While carpool lines formed in schoolyards across America and soccer moms reported for duty, I started to stew about what Jim and I would talk about at dinner that night, just the two of us. Or how we would fill our weekend without the boys’ games or friends or companionship to occupy us? What began as a nagging little worry gradually evolved into a storm front that clouded my quiet days. The term “empty nester” echoed in my head.

Have you ever seen empty abandoned nests? They are sad, wretched little things, caked thick with droppings and shell fragments. An empty nest is home is no one. The mother bird, disgusted at the mess of poop and feathers her children left behind, bails out and the father bird has no reason to come home.

I did not feel like the jilted proprietor of a dirty little empty nest. It thrilled me to watch my bright and handsome sons take flight for colleges in other states or jobs in distant regions. This is how we raised them: to be independent and curious. I was confident they would find their way back home and they have. But their absence from our house did beg a question I didn’t see coming. Who were Jim and I without them? We were surely not the newly weds we once were, expectant and unknowing. And we were not yet a couple of retired grandparents, sage and settled. We were too young to be old and too old to be young, like two formed apples still ripening on the branch.

Gradually, I learned how to sit and watch football next to Jim (silently) and he learned how to sit and talk movies next to me (verbally). Together we learned to play golf and plan trips to adult destinations like New York and Napa. We slowly discovered who we had become in those decades of parenting together. Occasionally in that process, my bare foot would find the sharp edges of a stray Lego piece, left behind by the little boys who once played there. A quick jolt of pain; then, it was gone. And, behold, we found this lifestyle “very good.”

Last year, in the middle of the week, Jim called me to meet him for dinner at a new restaurant in town. We lingered luxuriously at the table with no concerns about who was expecting us at home. It was a delicious act of independence by a husband and a wife who were no longer tethered to domestic responsibilities. Jim’s cell phone rang at the table and startled us out of our self satisfied mood. His face turned grave as he answered the call.

It was a medic alert system telling Jim that his ferociously independent 94-year old father had fallen out of bed and needed immediate attention. Ten minutes later, we hoisted his father back into bed and assessed the damage.

Later that week, after a conversation with my three sisters, I was designated to gently but firmly coax the car keys out of my 90-year old mother’s grip. No more driving for Mom.

And, just like that, there it was again. The forecast of a new weather front moving into our marriage: the season of caring for our parents.

The storms don’t scare me anymore. I see how they bring beauty and possibility into the changing landscape of our lives. And, mostly, I see the chance to discover something new about myself and my husband and this mysterious and sacred sacrament of marriage. Jim and I are well on our way into this next season of our love and, like we did as bride and groom so many years ago, at the end of each day, with God’s grace, we’ll continue to stand and face the elements together.