Pope Francis – A Man of His Word

Pope Francis – A Man of His Word

The world has regarded Pope Francis with fascination since his surprising ascendancy to pontifical power in 2013. As the first Jesuit ever elected, as well as the first Pope from the Americas and the first from the Southern Hemisphere, the former Jorge Mario Bergoglio was certain to bring a different perspective to the complex issues he faced in the world. 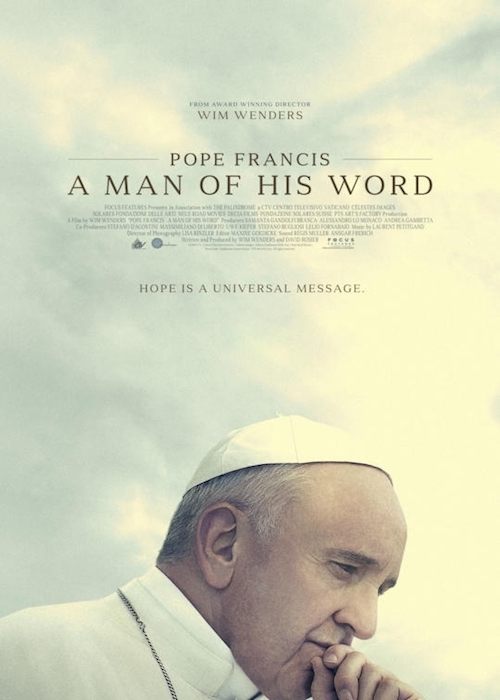 With a strong focus on the environment and frequent calls for economic justice, as well as a welcoming attitude towards gay people, he has stirred plenty of debate throughout his six years as the leader of the Roman Catholic Church. In the new documentary “Pope Francis: A Man of His Word,” acclaimed German director Wim Wenders (“Wings of Desire,” “Buena Vista Social Club”) shines a spotlight on the philosophical side of the pontiff, revealing that his choice of name might be the most important key of all to understanding his reign.

The movie opens in major cities today and goes nationwide over the next couple of weeks.

Surprisingly, the film wasn’t borne of Wenders’ own desire to pursue the pontiff, but rather from a Vatican request for the born-Catholic, currently “ecumenical Christian” filmmaker to help provide an in-depth platform for Pope Francis’ philosophy. Wenders filmed the pontiff in four two-hour sessions over a two-year period, allowing him to speak in his native Spanish for all the interviews. With the project kept secret until filming was completed, the film just made its worldwide debut at the Cannes Film Festival this month.

Wenders took the time to discuss the film via answers to emailed questions. His thoughts add insight into how this unique film was made, a film that focuses on Pope Francis’ philosophies rather than being a traditional biography and one that is sure to stir conversations among Catholics for its handling of hot-button issues like the environment, gay people, religious differences in the world and economic injustice while also soothing with its takes on the importance of family and God’s call for all of humanity to be one family.

– How did you decide to pursue Pope Francis for a documentary (asking for readers who want to know prior to seeing the film)? Was he immediately open to it or did it take a lot of negotiation?

WW: Well, the genesis of the project was actually the other way around. One day, a letter by the Vatican arrived in my office. Would I be inclined to discuss a project with them involving Pope Francis? (This was toward the end of his first year in office.) Yes, indeed! I had been excited about his papacy ever since we were all introduced for the first time to the new pope and heard the name he had chosen for himself: Francis! Wow! What a promise that was! No pope had ever dared to take up this name… It stood for a radical identification with the poor and the outcast and it was synonymous with a deep care for nature and “our Sister Mother Earth”. So I followed Pope Francis’ first year with enthusiasm, realizing he was indeed serious about transposing Saint Francis’ ideas into the 21st Century.

Soon I went to see Dario Viganò, then the director of Vatican TV, later the prefect of the secretariat for communication. He made it clear to me that I should look at this “invitation” as a Carte Blanche, that I could conceive the film on my own, that it had to be an independent production and that the Vatican was not going to interfere. He kept his promise.

– What do you feel makes Pope Francis stand out from the other pontiffs in your lifetime, that sparked your attention?

WW: Many things. First of all his openness and his courage to address the issues that not only the church is facing, but also humanity as a whole. His extraordinary ability to communicate with people! His genuine love and compassion for people. His sense of humour. The sheer emotional power and conviction of his presence. His kindness. His humility. His willingness to give an example and live what he preaches. His deep belief in the equality of all people before God. The clarity and simplicity of his language.

– What insights into Pope Francis do you most hope to impart to viewers – what’s most meaningful thing you learned? What was the most surprising?

WW: What I most wanted to share was the privilege to be eye to eye with the pope. To look into these utterly friendly, kind, curious, open and tender eyes was something I couldn’t just keep for myself! So I decided to shoot our long and intense talks in a way that Pope Francis is now eye to eye with everybody in the audience. I wanted people to be able to listen to the pope as attentively as possible and to see him as intimately as possible. So we used a sort of “reversed teleprompter” in front of the camera. Pope Francis didn’t see his answers written on it, of course – all his answers were spontaneous and direct – but he saw me on it, I was the living question so to speak, and he looked me in the eye and by doing so now looks into everybody’s eyes. I explained this to him before our first session, he also wanted to see how I would see him and realized I was sitting in front of the very same monitor showing his face, and that the two of us could really be in close and intimate situation, only “divided” by that piece of electronic technology between us. He understood the set-up and was very much at ease with it. Actually, we were both involved so intensely in our conversation that we totally forgot this technical medium in-between.

Our conversations took place in Spanish, so Pope Francis was utterly comfortable and could express himself in his mother tongue.

– Was there a particular moment or location that stood out in your mind as the most powerful experience of making this film?

WW: After two interview sessions with the pope in places inside the Vatican, I felt it would really be important to be outside with him for once, in nature. It soon became obvious that it was out of the question to shoot with him in any public park or garden in the city, simply for security reasons. So we looked around inside the Vatican and found a beautiful little park with huge pine trees, flowers, grass and bushes. It seemed quiet and ideal for our purposes. And when we prepared the shoot and set up our cameras, the lights and all our equipment, we were very happy with that choice of location. Pope Francis arrived, like always in good spirits and full of enthusiasm, (in a tiny Fiat Panda) and we just started our conversation, when a flock of parrots arrived and settled down in the trees just above him. They made a hell of a racket. Gone was the peaceful silence. Nothing in the world seemed to be able to scare these birds away. They just had a noisy conference. We all stood under that tree staring up, the pope included, and finally just had a big laugh, all of us, about our helplessness, and decided to live with the noise. The sound engineer redirected his directional microphones and brought them closer in. You now still hear those parrots, but it sounds much friendlier in the film than at the time in reality.

– Has making this film impacted your own sense of faith in any way? Are you a lapsed believer who returned to practice, an active Christian or Catholic who gained even greater depth, or did it impact you in some other way?

WW: I am an active believer, raised in a very Catholic family, involved in a Presbyterian community while I lived in America, and now consider myself an ecumenical Christian. I go to Catholic mess and to Protestant services. My favourite contemporary Christian thinker and writer is the American Franciscan friar Richard Rohr. This long time I spent watching and listening to Pope Francis, not necessarily in person, but on a daily basis in the editing room, did have a great impact on me. His positive and optimistic energy, his confidence in God, his humility, his courage, his kindness … they were all contagious and a huge inspiration.

– How much time did you get with Pope Francis overall, if you have a way of estimating?

WW: We met 4 times, over a period of two years, in 4 sessions of a good two hours each. So those personal one on one encounters lasted about eight hours. But I really spent a couple of years “in his company”, so to speak. Seeing and hearing somebody day after day on the screen in front of you, subtitling every word he says in Spanish or Italian into English, comparing things he said about the same issues at different occasion, all that gives you a familiarity with or closeness to that person. I constantly felt it was an incredible privilege. We also shot for a week in the little town of Assisi in the Umbrian mountains in Central Italy, to shoot some re-enactments of the life of Saint Francis, which I felt was needed to explain the weight and importance that his legacy has for Pope Francis.

– Do you have any insights about what direction he may be taking the church going forward, or what his key issues are likely to be?

WW: I cannot possibly answer that question. I just know: Pope Francis will not stop moving forward. And he will face every crisis and every challenge with the same courage, openness and tenderness.