We all have challenges to overcome in life, and the movie “Overcomer” – the sixth and latest from the filmmaking duo of Alex and Stephen Kendrick, aka the Kendrick Brothers – offers a stirring example of how to face them head on with faith. It continues the impressive and highly unique ministry of the brothers, who are Protestant ministers in small-town Georgia who grew up making movies for fun as children and wound up believing that they could reach millions with Christian messages if they made the effort to reach the masses in multiplexes. 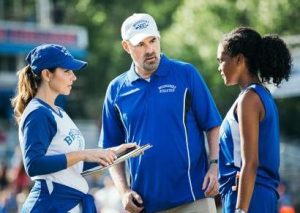 You’ve likely seen the results, as their films have become progressively bigger hits among a primarily Christian audience. Their second film, the football-themed “Facing the Giants,” cost $100,000 to make and earned an astonishing $10 million. The third, the fireman marriage drama “Fireproof,” became the most profitable film of 2008 when it made $34 million off a $500,000 budget, and the fourth, the action-packed cop film “Courageous,” made $32 off a $2 million cost.

But in 2015, they really broke big when the marriage-counseling drama “War Room” made $67 million off a $4 million budget. Clearly, the brothers are onto something, and even more wisely, they pay for each film themselves off the profits of the prior film – giving them complete creative control over their films and ensuring both a strong spiritual message and no morally questionable content come into play.

“Overcomer” follows John Harrison (played by Alex Kendrick himself, who directs and co-wrote with Stephen, who produces), whose team has high hopes for a championship the following season but is decimated when their small town’s major manufacturing plant shuts down. All his best players are forced to move away with their families in search of brighter horizons, leaving John to reluctantly agrees to coach cross-country, a sport he knows little about and does not enjoy.

The other focal point of the movie is Hannah Scott, the sole student running cross country for the high school, who runs carrying an inhaler to deal with issues with asthma, and also engages in compulsive small thefts. As the movie progresses, John meets a man dying in the hospital who has a surprising link to others in town, and who ends up becoming part of transforming both John’s and Hannah’s lives.

The deceptively simple story has clever touches throughout – how many other movies about sports have featured an athlete who can’t even breathe normally? Yet the Kendricks display an impressive gain in skills throughout the movie, with Alex expertly covering the running scenes with camerawork that glides and soars with aplomb, even as Hannah runs through some truly treacherous terrain.

With each movie, they also write better characters, smarter dialogue and manage to dial down the moments that have the potential for being heavy-handed in their messaging. It all adds up to put them head and shoulders above most of their Christian-filmmaker contemporaries and bodes well for Christian-themed movies to succeed on a regular and sustained basis after being derided as being too simple and straightforward from the dawn of Hollywood.

They’re part of a broader trend of “faith-based” films

They’re part of a broader trend of “faith-based” films that are finding ways to be relevant to the real world and are still primarily served up as entertainment for Christians but could easily win over non-believers simply seeking entertainment as well. The 2017 film “I Can Only Imagine,” detailing the tragic and eventually triumphant story behind the titular smash-hit song and featuring Dennis Quaid as the abusive father of a young Christian singer, was another film well worth seeing and managed to defy expectations by making over $80 million.

The standout performance in “Overcomer” comes from Aryn Wright-Thompson in her debut performance as Hannah. In classic movie fashion, she was the last kid actor the filmmakers looked at, and had the combination of fiery determination and wistful emotions they were looking for.

She rises to the challenge here just as much as the Kendricks, who have succeeded in teaching what could have been timeworn messages in a timely fashion. For those seeking to find some uplifting, or praying for a chance to overcome their own obstacles in life, this is a great movie to see.