Combined with a dry, deadpan humor vibe that is similar to “The Office”

AppleTV+ has been making some impressive in-roads into the streaming and programming wars, landing 18 Emmy nominations for its first year of programming. This week, I’m taking a look at their first big live-action comedy series “Ted Lasso,” which has already proven popular enough after just three of its scheduled 10 episodes to earn a second-season renewal, and its ambitious animated musical series “Central Park.”

“Ted Lasso” stars former “Saturday Night Live” star Jason Sudeikis as the titular American college-football coach with a thick Southern accent, who gets a wildly improbable call to move to England and take over managing the professional soccer team AFC Richmond with no notice. He jets over to his new life in England with his longtime assistant, Coach Beard (Brendan Hunt), reluctantly leaving his strained marriage and young son behind in Kansas. 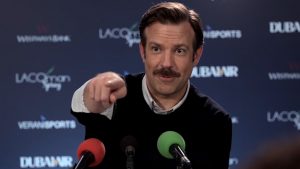 Lasso immediately finds himself in a classic fish-out-of-water situation, since he barely knows the lingo of soccer (aka British football) or its rules. He doesn’t know it, but the team’s bulldog of an owner Rebecca (Hannah Waddingham) has actually hired him in the hopes he’ll be disastrous and ruin the legacy of the team for her cheating ex-husband.

Ted is also instantly mocked by most of his players and the team’s long-suffering fans, who chant “Wanker!” loud and long during his opening game. But no matter how badly things seem to go for him, Ted’s genuine heart and hilarious homespun wisdom always manage to win over even his biggest doubters.

“Ted Lasso” is a terrific series on nearly every level. Sudeikis fully immerses himself in the character (which originated in a series of viral video shorts for NBC Sports’ soccer coverage a few years ago) and is both hilarious and touching in the role. Waddingham is more fun every time she appears on screen, alternately spitting fire in private and pretending to love Ted to his face in a performance that’s a comic tornado.

Several other characters, including key players and one particular player’s girlfriend, are well-drawn and engaging as well. The best part of the show lies in its ability to apply riveting and comical cliffhangers to the end of each episode, drawing viewers into its shenanigans in more riveting fashion than most sitcoms hope to achieve.

“Ted Lasso” has some swearing sprinkled throughout each episode, but it’s not overwhelming or unpleasant.

Combined with a dry, deadpan humor vibe that is similar to “The Office,” “Ted Lasso” succeeds in roping in viewers for an excellent character-driven journey. Rather than dumping all its episodes at once like Netflix, Apple+ is releasing a new episode each Friday (with this week’s marking the fourth in the series).

Meanwhile, “Central Park” is a sweet, funny and highly ambitious addition to the present-day renaissance in TV animation. Rated PG, it’s like an actually family-friendly alternative to “Family Guy,” following the adventures of Owen (“Hamilton” star Leslie Odom Jr., who scored an Emmy nom for his vocals), the ranger in charge of New York’s famed Central Park, and his family. 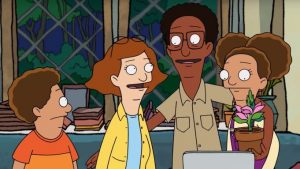 Owen is Black, and has a white wife named Paige (Kathryn Hahn), who’s a reporter eager for her big break, and two tween kids: Cole (Titus Burgess), who has a great love of animals, and Molly (Kristen Bell), a budding cartoonist. Owen has to contend with the ruthless ambitions of a wealthy old lady named Bitsy (Stanley Tucci), who wants to buy Central Park and build condos on it, and her right-hand woman Helen (Daveed Diggs).

Tying it all together is the all-seeing guide to life in the park, a busker named Birdie, who is constantly spying on the various characters and providing extra insight. Played by Josh Gad (who voiced Olaf in the “Frozen” movies and is also the top producer on the series), he provides a full-throated exuberance to the often-hilarious lyrics that makes this a winning watch.

The plots in “Central Park” aren’t off-the-rails crazy like “The Simpsons” or “Family Guy,” but what they lack in ridiculously audacious plotting is made up for by the stunning wealth of songs in each episode. There’s about a half-dozen per episode, all with funny lyrics and distinctively characterized vocals from the ace cast that also includes Kristen Bell as Owen’s daughter Molly.

All 10 episodes of the “Central Park” first season are already up on Apple +, so it’s easy to enjoy them without any waits.

The passing of legendary Supreme Court justice Ruth Bader Ginsburg on Sept. 18 inspired tributes from all sides of the legal and political spectrum. Aside from dozens of celebrities sharing their thoughts on the Notorious RBG via Twitter and other social media, Hollywood has provided the opportunity to pay tribute to her by re-releasing two films about her- the 2018 documentary “RBG” and the 2019 biopic “On the Basis of Sex”- into 1000 theatres this weekend and giving an extra push to them on VOD platforms.

“RBG” was produced by CNN Films, using the cable news giant’s ample journalistic resources to craft a documentary that covers several of her cases and the cumulative impact they had on society. It also serves up some fun and surprisingly romantic looks at the usually super-serious – or in her own words, “sober” – jurist that can make viewers of any political stripe smile and appreciate her humanity.

The doc opens with an audio montage of President Trump and several right-wing media figures’ disparaging comments about Ginsburg before cutting quickly to footage of then-Senator Joe Biden opening her Supreme Court confirmation hearing as head of the Senate Judiciary Committee in 1993. While the film was released two years ago, this opening salvo makes the film feel torn from today’s headlines as the country steels itself for what should be a bruising confirmation battle for her successor.

Quickly moving through her childhood as the daughter of Russian immigrants, it finds its footing by recounting how she managed to shine as one of the first women in Harvard’s law school while also juggling motherhood and marriage to her husband of 56 years, Marty, as he battled cancer. That incredible strain gave her a drive she carried throughout her life and career as a Supreme Court justice, when she was known to work all the way to 4 a.m. to prepare for cases.

Effectively showing how she shook America from its extensive array of laws that allowed sex discrimination in nearly all aspects of society by taking the laws down step by step, “RBG” helps viewers see that sweeping changes often come through small increments. Her most brilliant move came in taking a case, Weinberger v. Wiesenfeld, in which she defended a man’s right to take a caregiver tax deduction at a time when only women were allowed to consider themselves caregivers under tax law.

By making an appeals court rule that a man couldn’t be discriminated against on the basis of sex, it opened the doors to provide the same opportunities for women in other cases. But where “RBG” truly shines is in its final third, as it shows how RBG earned her rock-star status in popular culture by becoming the strongest dissenting voice in the Supreme Court as it shifted sharply rightward in the 2000s.

While “RBG” entertainingly covers the broad scope of Ginsburg’s life and career, “On the Basis of Sex” focuses more specifically on her days as a law student, wife and mother before leaping into an in-depth exploration of the Weinberger v. Wiesenfeld case. The biopic has the advantage of dramatically underscoring the emotional side of what Ginsburg endured at a time when judges seemed to give zero credibility to female lawyers, much less the ability of women to do any kind of meaningful work outside the home.

The movie is anchored by a terrific performance by British actress Felicity Jones, who bears a perfect resemblance to the young Ginsburg and nails her blend of steely resolve and caring heart as well as her Brooklyn accent. Armie Hammer as her husband Marty provides a great portrait of a man who was fully masculine yet open-minded enough to support his wife’s ambitions and be a fully equal partner to her in the home and the courtroom.

Director Mimi Leder brings it all together with dynamic art and costume design that brings both the 1950s and 1970s to life, and a rousing score by Mychael Danna drives it all home.

Both “Basis” and “RBG” are well worth seeing, and couldn’t be more timely viewing. While some of her stands, particularly on abortion and same-sex marriage, were contrary to Catholic teachings, she nonetheless had enough personal qualities to become extremely close friends with the devoutly Catholic conservative Antonin Scalia, so those interested in history or the law are highly recommended to watch either or both of these films.