After nearly a year of fighting the pandemic and living in a world where most comedy clubs are closed because people are scared to laugh around each other, we could all use some good humor. Thankfully, Netflix has come to the rescue with a couple of new offerings that bring comedy that’s also clean, so that anyone can enjoy it.

First up, I’m taking a look at the new half-hour sitcom series “The Crew” which stars Kevin James (a devoutly practicing Catholic in real life) back to television, where he previously found great success in the nine-season “The King of Queens” and so-so results with the two-season “Kevin Can Wait.” Building off his working-man persona as a UPS driver in “Queens” and a retired cop turned security business owner in “Wait,” James here plays another Kevin, this time serving as the head of a 40-member NASCAR race-car crew that’s facing a shakeup.

The crew is built around a young, dim-witted hotshot driver named Jake (Freddie Stroma), who’s incredibly fast but also highly accident-prone. When longtime team owner Bobby (guest star Bruce McGill) decides to retire and brings his daughter Catherine (Jillian Mueller) in from a career in Silicon Valley to take over the team, her serious business-minded approach quickly comes into conflict with the team’s usual fly-by-the-seat-of-their-pants approach to racing. 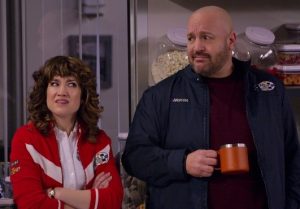 Kevin James in “The Crew” is now streaming on Netflix

But after four years without a first-place finish, things likely have to change, with Catherine even threatening to replace Jake with a younger female speed demon named Jessie. In the second episode, the team nervously has to face interviews with Catherine to justify their jobs, while she and Kevin schmooze a key sponsor on a funny hunting trip to get more funding.

“The Crew” isn’t groundbreaking comedy, but it’s not trying to be – it’s just out to show viewers a good time without having to shock or offend them. I’d say about 60 percent of the jokes land well, though the blatant laugh track can be annoying at times (though it becomes less noticeable the more you watch).

It’s refreshing to find a show these days in which blue-collar Americans in the middle and Southern-region “flyover” states are the people you root for rather than the subjects of condescending mockery. So if you’re looking for some easy laughs, this is one crew that can deliver them in a hurry.

Meanwhile, comedian Brian Regan has a new standup special called “Brian Regan: On the Rocks” that continues his reputation as a comic who can deliver hilarious laughs. He’s one of the kings of clean comedy along with Jerry Seinfeld and Jim Gaffigan (and Kevin James), and his first special in four years finds him white-haired for the first time – which leads to some hilarious riffs on aging since he’s now 63 and fully a senior citizen.

Regan kicks things off by joking about the many medical issues one faces as they hit senior status, from biopsies to odd pains throughout the body and the absurdities of doctor visits. He wonders why humans need a different doctor for every part of the body, while veterinarians are able to treat every animal imaginable.

Brian Regan: “On the Rocks” now on Netflix

Among his other topics are his ridiculous level of Obsessive-Compulsive Disorder (OCD) and how it ruins his daily life, his hilarious anxiety at cocktail parties because he always is tempted to mock others or say the wrong thing and mocking scientists’ efforts to find water on Mars (“I’d like to call them over to my sink and go ‘Look what I discovered!’”)

He also finds the funny in air travel, particularly people who wear backpacks on planes that smack people in the face, and the attitudes of fellow passengers to those who sit in the exit rows. (“Why doesn’t anyone thank you at the end of the flight? You volunteered to save everyone!”) Another standout bit focuses on what keeps people from committing crimes: “They say don’t do the crime if you can’t do the time, rather than saying just don’t do the crime because it’s wrong. It’s like, ‘I WANT to do the crime, but I can’t spend 15 years in federal prison.’”)

Regan brings a manic energy to the entire performance, deftly moving through lots of hilarious voices and zany facial expressions to bring his jokes to life. This is solidly funny the entire way through, showing that in “On the Rocks,” Regan is smoothly able to deliver the comedic goods.