This week, we have two distinctly different movies from Netflix: first, a lighthearted documentary called “The Last Blockbuster,” which recounts the rise and fall of Blockbuster Video with a special focus on the very last Blockbuster store in the world; and “Concrete Cowboy,” a stunning drama that’s nearly as powerful as the 1991 Oscar-nominated classic “Boyz N The Hood.”

Both are worth watching, for entirely different reasons. First up, “Blockbuster” is a fun nostalgia trip as nearly everyone can remember making the pilgrimage to their local store and scouring the shelves for as much as an hour in search of the perfect date movie, lost treasure, family movie or cult classic. Directed by Taylor Morden and written by Zeke Kamm, it features lots of memories from offbeat celebrities including filmmaker Kevin Smith and actors Samm Levine (“Freaks and Geeks”), Ione Skye (“Say Anything”) and Adam Brody (“The OC”) with narration by rising comedy actress Lauren Lapkus (“The Last Missy”) as a fun backdrop to the fascinating story behind the story of America’s favorite video-store chain. 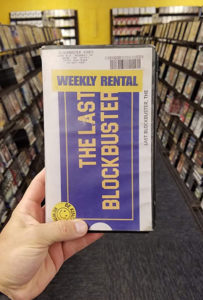 The movie zips through that history in amusing fashion, pointing out both the lucky breaks it had on its way to spectacular success and the missteps that led to an epic downfall (including, ironically, a failed attempt to buy Netflix in its earliest stages). But its heart lies in following the efforts of Sandi Harding, the owner and manager of the actual last Blockbuster store on the planet – located in the bucolic nature town of Bend, Oregon.

It’s touching to see how one movie buff’s passion for the art form has carried her through so many ups and downs and still has her determined to keep going. As the film shows how “nearly half the teens in town have worked there over the years,” it’s also a stirring account of mom-and-pop capitalism at its finest. The film keeps everything clean so there’s nothing offensive to worry about, and not only is this fun viewing on your own time or with your spouse, but it’s a fun history lesson for your grandkids who will likely be baffled by the idea that we used to have to go to physical stores to watch movies.

Meanwhile, “Concrete Cowboy” is a decidedly R-rated movie due to having an abundance of foul language in it, but I’m including it here with that caveat because it nonetheless is a powerful and profoundly touching tale of the importance of fatherly love and of personal redemption that has some very strong Christian elements to it.

I watched it with my 77 year old mother, who was incredibly moved by it and fascinated by its very unique setting and storyline. If she could overlook the language as being part of the milieu rather than brazenly offensive, most anyone can.

“Cowboys” follows the story of Cole (Caleb McLaughlin), a troublemaking Black teenager in Detroit who’s about to be expelled from school and will likely wind up in prison. His desperate mother drives him in the middle of the night to Philadelphia and against his wishes, unceremoniously dumps him on the doorstep of his long-absent father Harp (Idris Elba).

Cole is immediately resentful of his situation and wary of trusting Harp since he hasn’t been in his life since he was a toddler. But Harp has an unusual life, leading a group of Black residents of their hardscrabble neighborhood in caring for some world-weary horses located in a rundown stable in the heart of the city.

As Cole is forced to learn responsibility by caring for a particularly troublesome horse named Boo, he also is tempted to run the streets with a bad-influence friend named Smush (Jharrel Jerome). Harp gives Cole an ultimatum to drop Smush or lose his home but Torn between the two distinctly different life paths ahead of him, Cole finds it extremely hard to walk away. 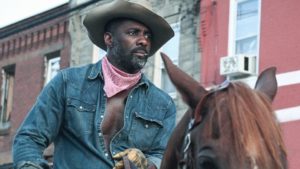 “Concrete Cowboy” is amazingly the debut feature film of director/co-writer Ricky Staub and writer Dan Walser, who show a remarkable empathy for the world of its inner-city Black protagonists despite both being White themselves. It truly is a film of immense heart and understanding of a subculture – inner-city Blacks finding hope through caring for horses – that exists in real life both in Philly and in the Los Angeles suburb of Compton.

The movie makes strong, direct reference to the Biblical tale of the Prodigal Son, and another key scene features a powerfully rendered gospel musical number. McLaughlin and Jerome offer up incredibly strong performances, with Jerome particularly impressive because he must be dangerously charismatic and yet reveals a deeply wounded heart that drives his ill-considered criminal actions.

Elba is really a supporting actor here to McLaughlin, but the veteran British actor cuts an impressive figure as Harp, especially in a confessional scene in which he reveals his painful past to Cole as he strives to bond with him. Add in outstanding, visceral cinematography in a couple of surprise fight and chase scenes and a perfect musical score throughout, and you have a movie I can’t recommend more highly and would be stunned if it isn’t on my Top Ten Films of 2021 list.