This week marks the official return of blockbusters to movie theatres after 15 months of pandemic paranoia causing studios to hold their best movies due to many theatres being closed. Two big movies – the sci-fi/horror sequel “A Quiet Place – Part II” and the live-action Disney movie “Cruella” (which I’ll review for next week)– hit the multiplexes today and bring back an epic sense of entertainment to America.

“Quiet” is the sequel to the surprise 2018 smash hit “A Quiet Place,” a tour de force by actor John Krasinski as he starred, co-wrote and directed the movie about hideous aliens that invade Earth and stalk human prey using acute hearing as their means of finding people since the beasties are blind. That movie was relentlessly paced and terrifying while remaining classy and PG-13, a rarity for the horror genre.

The original also featured some amazing pro-life subtext throughout, as it followed a family on the run whose mother (Emily Blunt) is about to give birth. The most harrowing sequence was the birth itself, as audiences were put through the wringer waiting to see if she could deliver the baby without one iota of screaming.

The fact that the baby was seen as a source of hope for the future that had to be preserved at all costs, even risking the life of the mother, was a powerful message that made audiences worldwide think deeply. And Blunt’s amazing silent scream as she pushed the baby out hearkened back to the amazing pro-life documentary “Silent Scream,” which revealed the pain unborn babies feel while being aborted. 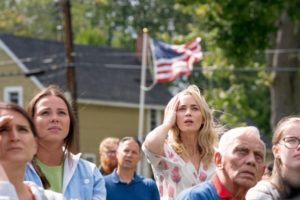 The new movie finds Blunt, her two teen children and the baby making a silent trek through forests to find an old family friend (Cillian Murphy) who’s hiding from the aliens in an abandoned factory high up in the mountains. Again, the baby saves the day, as the friend only allows the foursome to stay overnight because he takes pity on the infant.

This time, the teen children discover that a random radio frequency is continuously playing the old Bobby Darin pop classic “Beyond the Sea,” and the daughter takes this as a sign of hope that there are other human survivors trying to inspire people to make it across the ocean to a safe-haven island community. The aliens can’t swim, so making it to a boat is a smart and viable choice – if they can just evade marauding aliens and some nasty, near-feral human survivors to get to one. Will they make it, and can the mother, teen son and infant also survive an attack back at the factory hideout?

“AQP2” suffers slightly from the fact that the first was a complete surprise and had the advantage of setting up discoveries and revelations throughout. But Krasinski returns here as director and co-writer and manages to make a worthy follow-up that’s packed with scares and a sense of humanity that is all too rare in sci-fi and horror movies.

The sequel matches the first film’s brilliant use of sound and silence to convey maximum tension throughout, and there’s something exhilarating about an entire audience on the edge of their seats in terrified silence. This is a movie you are highly unlikely to find misbehaving crowds in, as everyone is drawn into the scary spell of it all.

“AQP2” also builds in some outstanding moral points within its tale, as a terrified man prays the Lord’s Prayer for solace in a flashback to the first alien attack and as the mother leaves her wedding ring at a cross memorial to those who died (including her husband, killed in the first movie).

Overall, this is a movie with amazing performances, insanely propulsive pacing and a lot on its mind. It also promises to keep delivering in future movies, as the outstanding climax sets up a compelling twist that will keep me coming back for more, and likely millions of others as well.

Now, for three streaming suggestions on Netflix that are decidedly more lighthearted in tone:

Netflix keeps cycling Martin Scorsese movies in and out of its collection, and one of the latest additions is this 2011 adaptation of Brian Selznick’s novel “Hugo” that was originally released in 3-D. Nominated for 11 Oscars (and winning five), this is one of Scorsese’s most acclaimed and beloved films, which should further put to rest any of those dumb insinuations that the legendary director only knows how to make mob movies. This is a whimsical, delightful film that you can watch with the entire family. It may not be in 3-D on Netflix, but you can still enjoy its endless visual glory.

Before he made Hemsworth your favorite Chris in Thor: Ragnarok, Taika Waititi wrote and directed “The Hunt for the Wilderpeople,” an adaptation of Barry Crump’s Wild Pork and Watercress. Ricky Baker (Julian Dennison) has a new foster family, including a sweet foster mother. Sadly, he’s stuck with the surly husband when his new mom passes away, leading Ricky and Hec (Sam Neill) on an unforgettable adventure. Funny and truly heartwarming, this is a comedy that’s almost impossible to dislike.

Julia Roberts might never have been more charming than she is in the beloved 1997 comedy “My Best Friend’s Wedding” about a young woman who made a pact in college to marry her best friend, played by Dermot Mulroney. Not until her buddy gets engaged to someone else (the wonderful Cameron Diaz) does she realize she really loves him. A great blend of physical humor and memorable characters makes this one of the best rom-coms of the ‘90s. They really don’t make them like this anymore.