It’s officially Spooky Season, but I’m a wuss when it comes to handling most modern horror movies, so instead I’m taking a look at a funny new Halloween movie – Netflix’s latest Adam Sandler film “Hubie Halloween”(PG13) – and a terrific, nerve-wracking new suspense series on Fox called “NEXT” (TV-14) by one of the top writers of the classic series “24.” You can’t ask for more wildly different kinds of shows, but they’re both great in their own ways.

I had a level of dread heading into “Hubie,” because most of Sandler’s Netflix movies have been unwatchable. The laziness of “Murder Mystery” extends from the title on down, I gave up on “The Do-Over” halfway through because it was aggressively unpleasant, while I couldn’t even make it through the stupidity after ten minutes with “The Ridiculous 6” and “Sandy Wexler” (and I’m a huge fan of nearly all his theatrical movies). Only “The Week Of” managed to be worth watching. (That’s five more reviews in two sentences!) 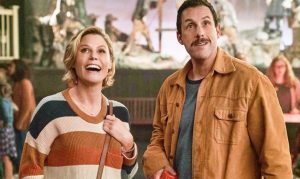 “Hubie” thankfully manages to recapture the silly magic of his initial superstardom in the late ‘90s, when he made films that were grandly absurd and built around a ridiculous persona like “The Waterboy” and “Happy Gilmore.” It follows Sandler as Hubie, a middle-aged goofball loser with a heart of gold (surprise!) living in the famed witch-trial town of Salem, Massachusetts, as he gets ready to be an unofficial monitor for the town’s safety amid its ample Halloween shenanigans.

Hubie speaks with a silly mumble, and most of the town utterly disrespects him – as shown in a very funny running gag as he dodges an unceasing array of objects are thrown at him while he bicycles through town. But Violet Valentine (played by Julie Bowen, Sandler’s love interest in “Happy Gilmore”) thinks he’s sweet and Hubie’s mom (Jane Squibb) keeps telling him to stand up for himself.

Hubie gets his chance this Halloween, when a seemingly dangerous mental patient escapes from the nearby institution and as Hubie encounters a mild-mannered but very odd new neighbor (played by Steve Buscemi in yet another great role as Sandler’s comic foil). With a wild high school party raging and hundreds of trick-or-treating children loose on the streets, he’s already got his hands full – but when people start dramatically disappearing before his very eyes, Hubie has to convince the skeptical town Sheriff (Kevin James in a hilarious fake beard and mullet) that true danger has finally hit town.

Part of the fun in any Sandler comedy is watching the comic cornucopia of his supporting cast, which this time includes appearances by Tim Meadows, Maya Rudolph, Ben Stiller, Shaquille O’Neal, Ray Liotta and Rob Schneider in addition to Buscemi and Bowen. While his supporting regulars are often poorly used, in this movie every one of them gets multiple moments to shine.

Sandler co-wrote with his longtime cohort Tim Herlihy, and frequent director Steven Brill finally delivers a truly fun movie (he was responsible for “The Do-Over” and “Sandy Wexler”). The gags come flying a mile a minute, with one particularly funny running gag being the series of dirty T-shirts Hubie’s mom wears throughout, utterly clueless to their double entendres (which will fly over kids’ heads). Overall, this is something fun that anyone willing to just turn their minds off and have a laugh can enjoy, and kids will love it too.

“NEXT” is a welcome return to the pulse-pounding thriller genre by Fox, and was created by ace “24” writer Manny Coto as an eight-episode “event series.” It stars John Slattery of “Mad Men” fame as Paul LeBlanc, a billionaire hi-tech developer who was ousted from the company he ran with his brother Ted (Jason Butler Harner) several months ago because he wanted to stop development of an Artificial Intelligence (AI) project called NEXT. 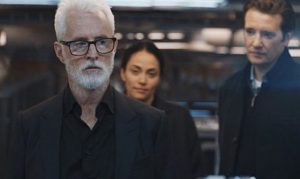 John Slattery starring in “NEXT” on Fox

As the show kicks off, Dr. Richard Weiss (John Billingsley) is running for his life from an unseen pursuer, which turns out to be the NEXT program gone haywire as it tracks him via his cellphone and eventually takes over the computer of a nearby car to cause a crash that kills him and the two who hit him. A note is found on Weiss that says he was heading to see LeBlanc, and soon an FBI agent named Shea Salazar (Fernanda Andrade) is calling in Paul to find out what his connection was.

Paul convinces Shea to head with him to Palo Alto to confront Ted about NEXT, and he finds that the AI monster has become infinitely more advanced than when he was terrified of it months before. Ted tries to assuage his concerns by assuring him that NEXT has no access to the Internet, which could vastly increase its knowledge and provide a conduit for it to control technology the world over.

But what they don’t know is that a programmer has secretly provided NEXT with a router that gave it that dangerous WiFi access, with limitless destructive possibilities. And one of those dangers is about to hit close to home, as Salazar’s young son Ethan receives some evil instructions from his Alexa-like device Iliza if she doesn’t save him in time.

“NEXT” is wonderfully complex yet riveting to follow, and brings back the genius hooks of “24” by jumping around at least four compelling plotlines at any one time. Slattery makes a terrific lead, especially when Salazar is shocked to find that he has a dangerous mental condition that might render his judgement suspect.

The rest of the cast are fresh faces, which makes the story more absorbing as viewers aren’t saddled with expectations of how veteran stars are going to act to fit their image. This week’s pilot was aces from start to finish, and I highly recommend catching up to it on Fox.com and making sure you see the rest of its run.