Nine years ago in 2010, Molly and John Chester were just a normal couple, living in a cramped apartment in Santa Monica. Molly was a private chef who specialized in filming how to make healthy recipes for a food blog, while John was a cameraman who specialized in environmental documentary shoots.

They were forced into making a complete lifestyle change when they adopted a rescue dog named Todd from an animal shelter and the canine wouldn’t stop barking loudly whenever they left him alone at home. With Molly having dreamed her entire life of owning a farm, they put the word out among their friends and family in search of investors who could help them buy a 200-acre plot of land and transform it into an eco-friendly, bio-diverse farm that would stand in stark contrast to the impersonal and industrialized “factory farms” that dominate today’s agricultural industry. 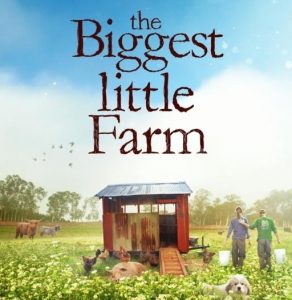 The couple have improbably succeeded in turning a big chunk of dried-out wasteland into a veritable Garden of Eden whose beauty is stunning to behold. Even more remarkable, they managed to painstakingly film that transformation, along with the dramatic struggles they faced and overcame along the way, and have turned it into the new documentary “The Biggest Little Farm,” which is released this weekend (at the Arclight Hollywood and Landmark theatre in Westwood before expanding into other markets next weekend).

“Biggest” opens starkly, with the grave threat of Ventura County wildfires looming over the horizon of the farm, as John and Molly pack their most prized possessions and ensure their hundreds of animals are safely evacuated. From that cliffhanger, in which we’re left to wonder if their farm survives or is burned down, the film takes us to their former lives in Santa Monica and the dramatic decision to start over amid the great outdoors.

They manage to secure major yet unspecified funding and embark on the adventure of a lifetime, relying on a natural-farming expert named Allan to show them the way to bringing dead soil to life. He impresses on them the importance of trusting nature to solve all the problems by relying on other forms of nature to do the work.

Their goal is to turn their Apricot Lane Farm into a “fruit basket”, growing over 70 forms of fruits and vegetables for sale in addition to allowing chickens and other animals to thrive in a free-range setting. Yet for every victory they make while learning how to raise pigs, goats, sheep, cattle, horses, guinea hens and more, they also have to contend with wild coyotes attacking their chicken pens and the vagaries of dealing with the wild side of nature.

They are helped along the way not only by Allan and a pair of experienced Latino men, who have worked on the farm for decades before the Chesters, but by an idealistic crew of twentysomethings who come from around the globe to have a meaningful job. As they manage to make their land thrive in gorgeous fashion over the course of eight years, John Chester and his crew find astonishingly beautiful and detailed examples of how the natural ecosystem is constantly adapting and replenishing itself.

It’s nothing short of miraculous that Chester and his incredible crew managed to film all of these highly detailed changes while facing the challenges of actually running the farm and learning to make it thrive from nothing. This is a film that spotlights not only the rewards of hard work but also the all too forgotten meaning of respecting the wonders of creation both on the ground, beneath the soil and in the night skies above. As Molly finally gives birth herself near the end of the film to an adorable son, the film becomes a subtle yet invaluable pro-life testament to the beauty and worth of human life as well.

Best of all, “Farm” teaches audiences all of these things while completely avoiding any heavy-handed, politicized speeches that could divide or even turn off viewers. It’s a deeply humane and simple story first, one that doesn’t explicitly mention God either, yet is so beautiful it’s impossible not to sing His praises for supplying its inspiration.