Looking at the trailers or commercials for the new movie “Searching” – about a father who’s forced to dive into a real-life crash course on the Internet, social media and all manner of high technology in order to find his suddenly-missing teen daughter – and it might seem that this is a movie that is strictly seeking to appeal to teens and millenials. But considering that an ever-growing swath of the over-50 population has managed to master such aspects of the Web and tech world, the movie still holds fascinating appeal for all ages since, at its core, the story is a universal one: that of a parent who will do nearly anything to save their child. 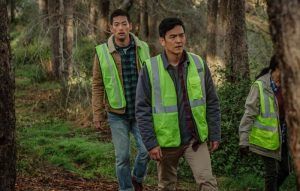 Even if you truly don’t know the Internet and social media well, “Searching” takes the time to make its excitement understandable for all. And the emotional rollercoaster the film takes audiences on transcends the cold technology of the Web to make this a truly humane and compelling thriller. And having such an in-depth look at the realities of how immersed teens (and sometimes their parents) are in the online world could be a great reminder and intergenerational conversation-starter.

”Searching” is the first major studio film to be told entirely through the use of visuals seen on technology screens like Skype, Facetime, home video cameras, Facebook, Instagram and Twitter. The film follows a widowed Asian-American father named David Kim (John Cho), whose 16-year-old daughter Margot (Michelle La) seems like the perfect kid and student until she drops off the face of the Earth after claiming to be at an all-night study group.

The two have always been close, but they have spent the past few years dancing around the sad fact that Margot’s mom Pamela died of cancer. Unbeknownst to David, Margot has retreated into a YouTube-style live-streaming site in which she pours her heart out to a few seemingly random online friends each night, while slipping away from her real-life friends.

When she doesn’t come home from the alleged study group and continues to be missing for a day, David has to figure out her entire personal life from scratch. Calling in the cops, he is assigned non-nonsense missing-persons ace Detective Vick (Debra Messing in a total 180 from her classic comedic turn on “Will & Grace”) and is led down a dizzying array of online rabbit holes in a desperate search to figure out if she’s run away, been assaulted, or gotten into nefarious criminal activity.

The resulting search is a complete and total nail-biter, with one shocking possibility after another seeming to be the certain end and then being disproven. This is the rare thriller, akin to the 2014 masterpiece “Gone Girl,” that will keep you completely astonished all the way to the end.

“Searching” is remarkable not only for its groundbreaking visual style and its sterling script by Aneesh Chaganty and Sev Ohanian, but also for being the first major studio thriller to ever star an Asian-American actor as the lead character. Cho has long been a successful, steady presence, having starred as Harold in the cult classic comedy trilogy of “Harold and Kumar” films as well as portraying Sulu in the latest trilogy of “Star Trek” films.

But stepping front and center in this film, he has to keep viewers focused in the unique visual settings while also displaying a powerful and nuanced array of emotions. The film’s zippy and touching opening sequence relays the family’s history through Pamela’s death in a way that recalls the wonderful opening sequence in the Pixar animated classic “Up,” but Cho has to keep the magic going almost entirely on his own the rest of the way.

Messing is almost unrecognizable as Detective Vick, eschewing the humorous pizazz of her beloved Grace character for a steely and intense performance that provides a rare showcase for her dramatic skills.
And bringing it all together is co-writer Aneesh Chaganty, who noted at a pre-premiere screening talk that he and a team of several friends spent five years conceiving the elaborately intricate approach and then had to shoot it independently on a low budget because no one had tried it before.

The result became a Sundance Film Festival sensation, leading to a dream deal with the Screen Gems division of Sony Pictures. Following fast on the heels of the massive success of “Crazy Rich Asians,” this is proof positive that a long-overdue Asian invasion is finally hitting American movie theatres, and will hopefully never stop.