One of the most heartbreaking problems in American society is the number of children and teenagers in the foster care system. According to the advocacy group Children’s Rights (childrensrights.org), there are nearly 438,000 children in foster care in the US on any given day, with over 687,000 kids having spent time in US foster care in 2016. These children  have a harder time than infants to get adopted because people often assume they are psychologically and emotionally scarred. 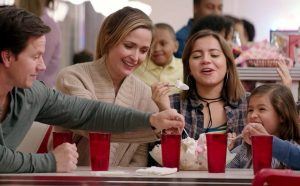 The new movie “Instant Family” shines a remarkable light on their plight by telling the story of a suburban couple who experience an emotional rollercoaster when they adopt three troubled siblings from the foster system. Directed by Sean Anders from a screenplay he co-wrote with frequent collaborator John Morris  (they wrote “We’re the Millers” and the two “Daddy’s Home” films together), the story is rooted in his real-life experiences adopting foster kids — and that personal connection gives the film an impressive emotional honesty along with a hearty sense of humor.

Starring Mark Wahlberg as a housing contractor named Pete, who buys shoddy homes and flips them with his wife Ellie (Rose Byrne), the film finds the couple realizing that they might want kids after years of denying it. They decide to adopt, with Ellie exploring foster care sites in the hopes of making a genuine impact on a troubled life while also figuring that she and Pete will have it easier than raising an infant by skipping the early, crying years.

Working through a pair of social workers — a by-the-book woman (Tig Notaro) and her sassy partner (Octavia Spencer) — they join a support group that’s designed to teach them about the difficulties inherent to adopting foster kids. They then pick a pretty but feisty 15-year-old girl named Lizzy (Isabela Moner), only to find that she has a younger brother and sister whom she can’t abandon.

Thus, the couple suddenly has three kids on their hands and no idea what they’re in for on both hilarious comedic levels and heartbreaking dramatic ones. Facing down skeptical family members, earning the love and trust of the kids, and encountering numerous misadventures along the way, the film is consistently engaging as both entertainment and a touching call to action for others to open their hearts and adopt more kids from the system.

Wahlberg has developed a truly winning persona as a dimwitted but kind-hearted father figure in the two “Daddy’s Home” films and proves the third time with Anders and Morris is the charm here. A devout Catholic who overcame a hardscrabble childhood himself on the streets of Boston, he made this film a passion project and kudos go out to not only him and the writers but to Paramount Pictures for investing in the film as part of its social-justice outreach efforts.

Byrne continues her string of charming and funny roles in such films as “Juliet, Naked” and the two “Neighbors” films with Seth Rogen, bringing a winsome charm to bear that is especially effective when she’s striving to crack the emotional defenses of the three children. But the real discovery is Moner as Lizzy, displaying a vibrantly real emotional range that signals she could be a big star and major talent to watch.

Backed by an ace supporting cast of Oscar nominee Spencer (“The Help”) as well as top comics Notaro and Iliza Schlesinger as a single mom comically obsessed with adopting an athletic African-American boy,  the film has depth in casting that goes well beyond most such films.

Put it all together and this is a family film that adults can enjoy as well, a film that can not only produce solid laughs but possibly even save lives.