There are some movies that are just too ridiculous for words. Movies that defy logic, the laws of physics, common sense, rationality and the fundamental rules of storytelling – and are gloriously entertaining in spite of it all. 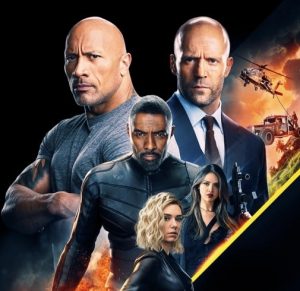 “Fast & Furious Presents: Hobbs & Shaw” is one of those movies. The first spinoff from the ridiculously long-running “Fast & Furious” series of action movies (eight films so far, with a ninth due next year!), it stars Dwayne Johnson as an American agent named Roy Hobbs and Jason Statham as the once-evil, now-good British operative Deckard Shaw.

A love-hate relationship for the ages forces the two titans to team up!

The two men have developed a love-hate relationship with each other  over the last two “Furious” films, after Shaw entered the “Furious” series as the villain in the end credits of the sixth. That eight-film series started out as the story of an uncover LAPD cop infiltrating a car-theft ring and crossing over into joining them.

But in the fifth film, “Fast Five,” Johnson’s character of federal agent Hobbs entered the scene to track down the gang – which was dispersed into hiding internationally – and enlist them to steal a drug lord’s $100 million bank vault from the center of the Rio de Janeiro police department. That insane assignment brought  the series to another level, taking the scrappy team of car thieves into James Bond/”Mission:Impossible” territory with a series of globetrotting adventures.

The new movie focuses on its titular heroes as they try to find a British intelligence agent named Hattie (Vanessa Kirby) who has apparently gone rogue with a deadly super-virus that could wipe out the planet’s population within days. In reality, she has heroically injected the virus into her body for its 42-hour latency period in order to keep a half-human, half-robot former soldier named Brixton (Idris Elba) from capturing it on behalf of a shadowy British organization of ex-military figures seeking to turn powerful weapons and viruses against humanity.

Hobbs is working for the US, Shaw for the Brits, and neither is happy about having to share the danger and the glory involved. But when it turns out that Hattie is Shaw’s long-estranged sister, and Hobbs might have to enlist his own long-estranged brother on Samoa to help save the day, the film shrewdly weaves in solid emotional underpinnings for the adventure.

Beyond that, there’s a brewing attraction between Hobbs and Hattie that drives Shaw comically nuts as the trio of heroes hop all over the planet. Brixton wants to get the virus back out of Hattie’s body so it can be weaponized worldwide, while Hattie, Hobbs and Shaw need to steal the device that Brixton’s going to use to extract the virus from her. If they can’t get it in time, Hattie will die and the virus goes airborne.

The script by longtime “Furious” scribe Chris Morgan and the direction by veteran stuntman-turned-director David Leitch (“Atomic Blonde,” “Deadpool 2”) make this movie zip along at a nonstop rapid pace. Beyond the usual hand-to-hand combat and kung fuey action, there is an incredible motorcycle chases, an unbelievable running and jumping chase down the side of a skyscraper, and a finale that is literally impossible to describe in any coherent fashion.

Just know that if you are an action fan, you are getting your money’s worth about ten times over. And, like the “Fast & Furious” movies, this is basically a Wile E. Coyote cartoon come to life.

The movie has ridiculous amounts of non-bloody violence that’s impossible to be taken seriously. If you can handle James Bond, “Fast and Furious” movies, Indiana Jones films or anything in the Marvel superhero universe, you’ll be fine. There is some swearing throughout, but just one F word and that’s played comedically, so basically nothing that any adult can’t enjoy if they like action or to get their minds off of life’s troubles for two hours.

While Elba is a formidable villain and the trio of Johnson, Statham and Kirby are very entertaining in their combo of comedy and heroics, the movie also benefits greatly from a couple of truly surprise extended cameos by superstars who are perfectly matched for their roles. It’s nice to see that a movie universe that could be running on autopilot nine movies in is instead looking to give audiences extra bang for their buck throughout.