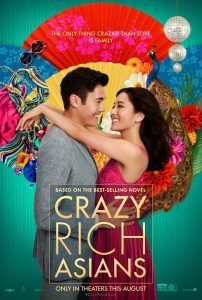 Truly funny romantic comedies that are also actually romantic have been a rare and dying breed since “When Harry Met Sally”  nearly 30 years ago. Think about it: “Pretty Woman” might have had a happy ending, but at its core it’s still a story of a wealthy guy paying $3000 to have a hooker for a week. And “You’ve Got Mail” and “Sleepless in Seattle” were sweet but bland and not very funny.

But this weekend, the genre has been saved by a most unexpected source— the new movie “Crazy Rich Asians,” which is also groundbreaking because it’s the first US-studio-financed film with an all-Asian-American cast to be released since “The Joy Luck Club” 25 years ago. Incredibly, that fact also makes it the second such film ever released by American studios.

Packed top to bottom with all Asian-ethnic actors and directed by Jon M. Chu, it may seem that “Crazy” might be so “inside” the community that only Asian-descent viewers would be interested in. But rest assured, this is a movie packed with funny supporting characters, likable leads, sumptuous locations, stunning cinematography and universal emotions, making this not only the best date movie of the year so far but also a class act nearly devoid of crass humor.

The movie follows the story of Rachel Chu(Constance Wu, a star of ABC’s sitcom “Fresh Off the Boat”), a New York University professor of game theory who has been dating a handsome man named Nick Young (terrific new leading man Henry Golding) for the past year. As Nick heads home to Singapore to be the best man in the wedding of his best friend, he invites Rachel to come along and be introduced to  the family he has mysteriously barely mentioned.

Rachel is a down-to-earth gal who was raised by a single mom and had to pull herself up by her bootstraps. Until Nick takes her into a first-class luxury suite aboard their jetliner, she’s never realized that Nick comes from a “crazy rich” family of real estate tycoons, with a father who’s always away on business and a quietly imperious mother named Eleanor (Michelle Yeoh).

When the young couple touches down in Nick’s hometown, Rachel finds herself in an entirely different economic stratosphere and has to navigate between Nick’s often snobbish family and friends and her rich but friendly college roommate , Peik Lin Goh (rapper-turned-actress Awkwafina in a hilarious scene-stealing performance). Peik and her eccentric family help Rachel learn the ropes of the new world she’s entered and to stand up for herself against the cruel machinations of the many other young local women who want to steal Nick away from her, and the stubborn refusal of Eleanor to accept her.

The idea of a fish-out-of-water comedy and of a person forced to win over coldhearted people in different social strata are standard plot elements that could easily have veered into cliché. But the fact that director Chu and his incredibly talented cast are such fresh faces and voices, taking this all-too-rare opportunity to play on a grand scale, makes the film feel dynamic , vibrant and new in every scene from start to finish.

Refreshingly, the film steers clear of making political points, simply accepting the fact that these characters are extremely successful rather than demonizing the rich as terrible people , as so many other modern films do. Some do terrible things to Rachel along the way, and Eleanor is a cold and cunning adversary, but there are plenty of decent and kind people in this arena as well— and when Rachel finally figures out how to beat the cruel people at their own game and show that she’s unbroken, the moments of triumph and reconciliation (there’s no spoilers here – romantic comedies always have happy endings) are that much more touching.

Based on the hugely popular 2013 novel by Kevin Kwan, “Crazy Rich Asians” also bucks the disgusting trend of most mainstream comedies in the past two decades. Ever since the teen sex comedy “American Pie” destroyed all taste barriers in 1999, it seems that nearly every romantic or adult comedy wallows in filth that pushes the boundaries ever further, but “Crazy” manages to have a very few implied naughty jokes while having only one notable swear word in its entire two-hour running  time, and the focus is on romance rather than sex as the main couple’s bed scenes either fade away with a kiss or show a wake-up-in-the-morning aftermath.

Even then , marriage is shown as the highest ideal for a relationship, family is prized thoughout and despite her cruelly cutting early treatment of Rachel, the movie  matter-of-factly shows that Eleanor is a Christian who leads a regular Bible study. When was the last time you saw all those elements put together in a new Hollywood movie?

“Crazy Rich Asians” is a gift to moviegoers who have been missing mostly-clean comedy, truly ravishing romance and high-quality human stories over computer-effects blockbusters for far too long. If you care about helping  comedy movies return to high artistic and moral standards, this movie is a must-see.