MOVIES – “Blinded by the Light”

MOVIES – “Blinded by the Light”

Growing up in North Little Rock, Arkansas, in the 1980s, I was often more frustrated than other kids because I felt trapped in a small town and longed for the big-city excitement of New York, Chicago or Los Angeles. It seemed like the entire world was whizzing past me, while I was a broken-down car on the side of the off-ramp of life.

Add in the fact that my well-meaning father (whom I get along with splendidly now) had emigrated from Poland, a country dominated by hard-line rules from both its Communist government and the Catholic Church. He wanted to give us a better life, which he achieved as a career VA doctor, but until my early 30’s we often butted heads over the slightest sense of impropriety in my other career as a standup comedian and humor writer. 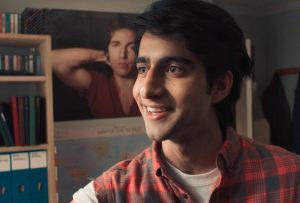 I found escape from all those internal pressures through the music of Bruce Springsteen, who had grown up at odds with his father in a hardscrabble New Jersey town and channeled his frustrations with some of the most personal yet universal lyrics in rock music history. The powerfully uplifting new movie “Blinded by the Light” shows just how universal Springsteen’s music can be by depicting the true story of a Pakistani Muslim teen named Javed and how “The Boss” inspired his own quest to become a writer despite his immigrant father’s disapproval in 1980’s England.

The movie follows Javed (Viviek Kalra) as a 17-year-old in a working-class town called Luton in 1987, a shy introvert who constantly writes poems and song lyrics in the journals he’s been keeping since he was 10 years old. Devoid of a social life due to his incredibly strict father Malik (Kulvinder Ghir), he thinks the only way out is to ace his school exams and study economics at a far-away college.

A new English teacher named Ms. Clay (Hayley Atwell) encourages his creative writing and tells him his poems have power, and that his mission in life is to share his point of view with the world. A cute Caucasian girl named Eliza (Nell Williams), who’s a politically activist outsider, is intrigued by overhearing Ms. Clay’s compliments.

But a chance encounter with a Sikh student named Roops (Aaron Phagura) inspires Roops to hand Javed cassettes of Springsteen’s “Born in the USA” and “Darkness on the Edge of Town,” telling him they will inspire him and set him free. And indeed, they do— setting Javed on a path to expressing his views of the world, becoming his own man who can be both supportive of and distinctly different from his father, and towards the rush and glory of first love.

“Blinded” is named after one of Springsteen’s earliest songs, and the film is packed with 16 of The Boss’ most beloved tunes. Just as no Springsteen song is merely a song, but rather powerful portraits of frustrated lives desperate for transcendence, the tunes here aren’t just background music. They’re rousing calls to arms, urging us all onto the greater selves we all too often bury under the slog of daily life.

The songs are deployed in highly creative ways, with several filmed as giant musical numbers that have the leads singing along with Bruce’s actual recordings. “Born to Run” features a dynamic run through the streets of Luton, “Thunder Road” becomes a breathtaking love song with couples swirling in the streets. At other key points, the lyrics of Springsteen are spelled out on the screen, pouring out of Javed’s ears as he feels his voice and his hero’s become one.

Director Gurinda Chadha works wonders with her first mainstream US release since her surprise 2002 hit “Bend It Like Beckham.” That film showed the transcendent power of soccer to help a teenage daughter of orthodox Sikhs break free of their rigid rules and into her own person—a similar theme to that of “Blinded,” but one which she handles superbly.

Most powerfully, “Blinded” is a story of the universally relatable divide that comes between fathers and sons as the younger generation learns to stand as men. It shows that music is the universal language that can break down barriers and make all types of people, no matter their age or cultural background, understand each other.

I have to give my own father credit that he never interfered with my taste in music and that my parents bought me tickets to see Springsteen while I was in college as a Christmas gift. And a few years ago, he surprised me greatly by sending a CD of “Born in the USA” among the gifts for his younger sister’s birthday.

Afflicted by Down Syndrome and unable to speak the English language of her life in Los Angeles, she has always come alive most when listening to joyous, vibrant music. The fact that my father remembered more than 30 years later remembered how much “Born in the USA” set me free and wanted to share its spirit with his sister moved me almost to tears.

Given a chance by adventurous audiences willing to seek out a rousing, touching and highly entertaining film that’s utterly devoid of traditional star power, “Blinded” could easily become a timeless coming of age classic like “Fast Times at Ridgemont High” and “The Breakfast Club.” But it speaks to anyone of any age.