It looks like theatres are eventually going to open, with the new blockbuster “Tenet” by Christopher Nolan (“Inception,” “The Dark Knight” trilogy) as the first big movie to kickstart the film industry. But this week we’ve got two pretty good new movies with big stars that you can stream at home.

First up we have “Irresistible,” the new movie written and directed by Jon Stewart of “The Daily Show” fame, and starring Steve Carell. He fictionally plays Hillary Clinton’s 2016 campaign manager, who tries to figure out how to win rural swing-state white voters back to the Democrats by going to a small Wisconsin town and talking a Marine veteran farmer into running for mayor, only to find that his rival campaign wizard from Trump’s team (Rose Byrne) shows up to run his opponent’s campaign there too. 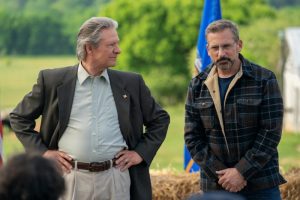 The movie is like “Mr. Smith Goes to Washington” if it had some F bombs and a couple of sex jokes. You might not want to imagine Jimmy Stewart doing that, but Steve Carell does a great job here. And the amount of them is not overwhelming, just typical for a normal R rated film.

The movie is often interesting and kind of dramatic, but I laughed at least 30 times at the great one-liners. Best of all, the movie shockingly makes both Carell’s liberal Democrat character and Byrne’s conservative attack dog equally flawed people, makes the small town folks smarter than big city folk for once, and totally avoids shoving an agenda from either side of the fence . In other words, this is one movie that people of any political persuasion will actually love. It is indeed “Irresisistible” and can be rented for $19.99 on Amazon, Apple and other VOD sites.

I also checked out “Eurovision Song Contest: the Story of Fire Saga,” the new movie starting Will Ferrell and Rachel McAdams that just debuted on Netflix. It’s about an Icelandic guy named Lars (Ferrell) and gal named Sigrit (McAdams) who have been lifelong friends with dreams of winning Eurovision, a real-life TV music competition that’s like the European “American Idol” with insane costumes and choreography. 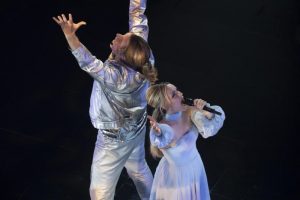 This LOOKS like it’s supposed to be a wacky comedy musical, but there are big chunks of it where it’s not really trying to make you laugh but instead serve up a sweet and inspirational story along with some impressive musical numbers. Veteran supporting actor Dan Stevens is a standout as Alexander Lemtov, a ridiculous Russian performer who is hilariously self-absorbed and utterly in denial about his obvious gayness (his musical numbers with male dancers are particularly laughable). Pierce Brosnan does a nice job as Lars’ father, who is at first embarrassed by his son but learns to be impressed as his son’s can’t-stop attitude improbably starts paying off.

It’s all a very weird mix that drags in a couple of places but the parts that work, work great, and when you see where it’s all going by the end, you wind up digging the entire show. Will Ferrell also co-wrote this and it’s a kick to see him go full-tilt into a ridiculous character as he grows long hair, picks up an Icelandic accent and uses mixed-up American slang throughout.

Rachel McAdams is adorable in it too, and displays some stunning vocal pipes in her musical numbers. I wish more of the songs were played for laughs rather than trying to sound like actual Europop songs, but one song called “Ja Ja Ding Dong”: serves up the biggest laughs of the movie and fits in twice. This is only PG13 so you can pretty much watch it with the whole family cause the few sort of offensive parts go by fast and you can’t help laughing at them anyway.