This week I’m looking at a couple of veteran performers in movies of wildly different quality, both of which are found on Amazon Prime. Eddie Murphy and Arsenio Hall reteam in the sequel to “Coming to America” called “Coming 2 America” (the lame title is just the start of its weaknesses), which debuts today. Meanwhile, the overlooked 2015 gem “Ashby” stars actor Mickey Rourke in a touching coming of age dramedy that finds his character with a strong and positively portrayed Catholic take.

“Coming 2 America” follows up on the 1988 original, which gave Eddie a chance to shine both as multiple wacky characters thanks to Rick Baker’s Oscar-winning makeup, and in his first romantic character. His Prince Akeem traveled to America with his servant Semmi (played by Hall) from his fictional homeland of Zamunda to find a wife when he didn’t want to have an arranged marriage, and the two hilariously landed as total fishes out of water in the broke-down New York borough of Queens. 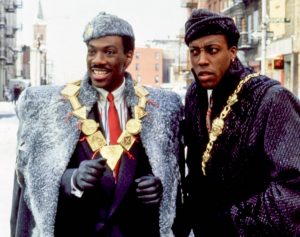 The new movie finds him celebrating his 30th anniversary as a married man with three daughters and king of Zamunda, but his dying father (James Earl Jones) tells him he can’t pass the throne onto a female heir. An oracle woman (played by Hall in funny makeup) reveals that Akeem unwittingly fathered a son while in Queens 30 years before and so Eddie and Semmi go off to find his son and bring him back as the new heir to the throne.

Their trip to Queens is much shorter this time, as Akeem quickly finds his son Lavelle (Jermaine Fowler) and his mother (Leslie Jones), whom a flashback reveals got him high before having sex with him once. The culture clash between Lavelle’s low-class American family – including his dimwitted Uncle Reem (Tracy Morgan) – and his new royal one finds some solid laughs early on with Jones stealing all her scenes.

But the movie starts hitting the skids after a few funny scenes in Africa, as the movie turns its focus on Lavelle having to prove his worth as heir by passing three tests. If he passes them within a week, he is to marry the daughter of General Izzi (the leader of a rival nation, played by Wesley Snipes) in an arranged marriage. But predictably, Lavelle falls for a female Zamundan who’s assigned to be his caretaker during the week, and romantic complications ensue.

The movie falls apart on several levels, as seemingly endless talky scenes put that boring romance in the foreground. The far bigger problem is that Eddie and Arsenio have almost nothing comedic to do for most of the movie, instead either just standing around making facial expressions or serving as straight men learning to respect women and give them greater rights – a point that is hammered home over and over, taking the politically incorrect glee of the classic original almost completely out of this sequel.

Surprisingly for an Eddie Murphy movie, there is no noticeable swearing in this movie, which is fine if you’re concerned with language, but again this is a sequel to a movie that had great goofy fun with profanity. There are a few brief sexual innuendoes that earn it a PG13, with the funniest scene in the movie involving a somewhat dirty surprise, but overall this is a tame movie that even worse, is a lame movie – and a prime example of creating a sequel that no one needed or probably even wanted.

“Ashby”, meanwhile, is a constantly fresh and surprising jewel, about a teenage boy named Ed (Nat Wolff) who moves to a new town with his mother (Sarah Silverman) after her divorce from his uncaring father. Assigned to interview an older person for a class project at his new Catholic school, Ed asks his next-door neighbor Ashby (Mickey Rourke) if he’ll agree to be quizzed about his life. 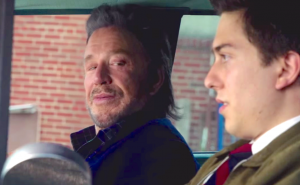 Ashby first tells Ed that he was just a napkin salesman before retiring, but Ed stumbles across the truth when he finds multiple passports and a stash of major weaponry hidden in Ashby’s house. It turns out Ashby is a retired CIA hitman who killed 93 men during his career and is now facing death from brain cancer while haunted by regrets over the lives he took.

The movie alternates nicely between laughs and serious emotion as it follows this unlikely friendship, with the movie’s surprising strongest suit being the Catholic Ashby’s desire to find forgiveness in confession. The movie shows him consistently and positively in his faith, as he corrects Ed when he blasphemes on occasion, while also showing him interacting in well-written fashion with a young priest who is sympathetic to his plight.

“Ashby” is smartly and touchingly acted, and makes all its characters – including Ed’s lonely mother, whose attempts at a love life serve as a source of embarrassed tension for Ed. The movie is rated R for a couple of scenes that have profanity, but in the overall context of the film, they’re barely noticeable or offensive.  I highly recommend this movie, so search for it by title and enjoy.