There’s been some dry spells for genuinely good movies so far this year, but this week isn’t one of them. In fact, I’m taking a look at three this week – two in theaters, and one that you can enjoy at home on Netflix.

First, I’d like to spotlight the film “Unplanned,” a film that pulls the curtain back and shines a much-needed light on America’s largest abortion provider, Planned Parenthood. It follows the true-life story of Abby Johnson, a woman who had two abortions before becoming a Planned Parenthood employee. She rose to the status of being a clinic director and named Employee of the Year – before finally seeing the ultrasound of an abortion in progress and becoming immediately devastated by seeing the pain the unborn baby was going through. Johnson immediately resigned from Planned Parenthood and went on to write a best-selling book of the same name about her experiences. She also created a movement that is encouraging Planned Parenthood staffers to follow in her courageous footsteps and leave their abortion careers behind. 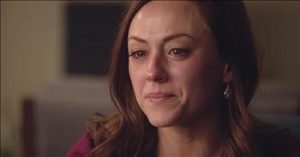 The movie is written and directed by the two-man team, Chuck Konzelman and Cary Solomon, behind the “God’s Not Dead” trilogy of films, in addition to several other Christian films released under their PureFlix banner. Some of those films were heavy-handed and poorly acted, but they’ve created a powerful and affecting film here.
The cast is made completely of unknowns, which can be seen as a sad reflection of mainstream Hollywood’s nearly wholesale rejection of pro-life viewpoints. But thankfully the cast they have picked, led by Ashley Bratcher as Johnson, is outstanding. Her performance is rousing and heartbreaking all at once.

One of the most impressive aspects of “Unplanned” is that Konzelman and Solomon have resisted the easy urge to portray the Planned Parenthood workers as monsters. They are portrayed as normal human beings who may not realize what they are really doing. Thus, the film has an intelligence and subtlety that allows the real horrors of abortion itself to be fully focused upon.

There are some gruesome scenes in the film, with two abortions shown and a tense scramble to save the life of a third woman whose uterus is perforated in a botched abortion. But this is vitally important film that should be seen and supported by any adult Catholic. Help it spread the horrifying truth of abortion, while also enabling the filmmakers with success allowing them to make more like-minded films.

Meanwhile, Disney is releasing a live-action version of its 1941 animated classic “Dumbo” this weekend. It is such an enchanting wonder that there’s not much to say about it without spoiling the magic of director Tim Burton’s most engaging film in years. Based on the 1941 classic cartoon that was amazingly just 64 minutes long, the new “Dumbo” continues Disney’s recent trend of turning its beloved animated films into live-action extravaganzas — and like 2017’s “Beauty and the Beast,” this is an outright winner. 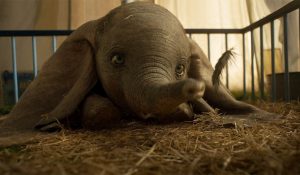 The film tells the tale of a baby elephant that was born with giant ears that enable him to fly and becomes a star in a ragtag traveling circus run by Max Medici (Danny DeVito). In this extended live-action spectacle, 48 minutes of additional story are brought to life as a PT Barnum-style showman named V.A. Vandevere (Michael Keaton) tries to buy Dumbo for his new Dreamland theme park in the big city. Are his intentions nefarious?

If you can’t figure that out, you’ve never seen a Disney children’s movie. But “Dumbo” is loads of fun regardless, with Keaton and DeVito reteaming with Burton and clearly having a blast long after their star turns in “Beetlejuice,” “Batman” and “Batman Returns,” respectively. Colin Farrell is also excellent as Holt Farrier, a widowed father who returns from World War I, missing an arm, and trying to reconnect with his young children amid the Medici circus.

Sure, the decision by Disney to make live or CGI versions of animated classics like this, “Beauty” and “Jungle Book” (with a live-action “Aladdin” and CGI “Lion King” still to come later this year) may be driven by the desire to have slam-dunk hits. But I give the studio much credit for hiring innovative filmmakers and putting top-notch masters in charge of everything from costumes to effects to the scores. These are films that so far manage to be both commodities and top-notch reflections of populist film at its best. They’re fun to watch on your own or with fellow seniors, but even better to see with young relatives.

Finally, Netflix has been stepping up its output of its own name-brand films in the past couple of years, with its most noticed film so far being the Best Picture nominee “Roma.” This weekend, it streams “The Highwaymen,” a sumptuous historical thriller starring two of the most enduring leading men in America today – Kevin Costner and Woody Harrelson – as two Texas Rangers who teamed up to bring the criminal duo of Bonnie and Clyde down during the Depression.

Writer-director John Lee Hancock makes films that avoid offensiveness, with Best Picture nominee “The Blind Side” among his successes. His approach to this roadtrip adventure, which follows the dynamic lead duo across several states in their quest for justice, is low-key much of the time – an unexpected approach for a film that could have been an amped-up action extravaganza. 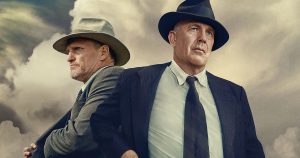 But this approach works wonders, allowing viewers to see the human toll that violence – even of the noble kind – brings to people. Costner and Harrelson’s agents each have a dark memory in their past, while a standout scene between Costner and Clyde’s father shows the impact that a criminal can have on his own family by bringing them frustration and shame.

There are some fun car chases and fights in the film, but its R rating does not reflect ultra-graphic or bloody violence. Everything is handled with taste and discretion, and there’s also a minimum of foul language, a rare bonus when one can find that these days. Overall, this is a solid and moving historical piece that’s shot with an impressive attention to detail. And even better, you don’t have to hit the highway to see it.