In the heat of the summer movie season, it is often tough to find movies that have something to say rather than just things to shoot at. Thankfully, there are a couple of thoughtful movies out now that offer fresh takes on life, if you’re willing to look at the world from a somewhat younger perspective that’s still sharp enough to be  universally relatable. 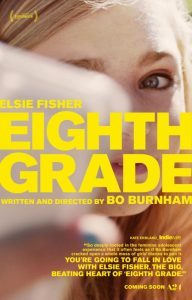 There are few more universally awkward times in life than the cusp of adolescence and the transition from middle school to high school. Nearly every human being who goes through eighth grade endures challenges to their emotions and psyche that will shape their eventual lives as adults forever.

However, some people aren’t forced to really grow up until years later. Two new films— “Eighth Grade” and “Blindspotting,” both of which will likely stand as among my year’s ten best— explore these difficult transformations from uniquely different perspectives.

“Eighth Grade” leads viewers through the metaphorical battlefield of that seminal year with an insightful mix of humor and pathos that is simply astonishing. Centered around a soon to be legendary performance by young, largely unknown Elsie Fisher (a likely Oscar nominee), the movie draws viewers completely into the viewpoint of an incredibly awkward girl finding her own inner strength and value for the first time.

The movie follows Fisher as Kayla (Elsie Fisher), who is awkward and insecure and somewhat overweight, yet nonetheless makes YouTube videos each day featuring her advice for various aspects of life that almost no one watches. She is obsessed with her cellphone, constantly surfing Facebook and Instagram to “like” other people’s lives and posts, while not having anything or any friends of her own to discuss or share with the world.

Kayla lives only with her father (Josh Hamilton), who briefly mentions that her mom left them when she was a baby. She has a comically high level of sullen silence towards him that subtly breaks his heart, as he tries to be a good and engaged father but is constantly locked out of her thoughts and life.

As she navigates making it through an awkward pool party, a triumphant day “shadowing”/hanging out with an older girl at her impending high school, and awkward encounters with boys, Kayla is afraid to discuss her most difficult moments with her father.

Yet rather than leaving the relationship with her father in a state of disrespectful disrepair, writer/director Bo Burnham is trying to set a subtle yet powerfully positive example of parent-teen relations in our tumultuous times. Kayla’s dad never gives up, never stops encouraging her, never stops giving her the love she needs to eventually break through and thrive, and when she does finally open up to him, it’s beautifully touching and transformative.

It’s also a touching reminder of the Prodigal Son parable, and thus a reminder of how perfect love is always patient and always forgives. Anyone who’s been a parent should relate to the touching reconciliation found here.

Ultimately, “Eighth Grade” is an extremely intimate look into the mind of an average girl in an era when social media and cellphones have destroyed much of human interaction. It’s funny enough to be classified officially as a comedy, but it’s also very heartfelt and touching in many places and has an almost documentary feel in the way that writer-director Bo Burnham (a star standup comedian who became a YouTube star himself as a teen a decade ago, who is making his filmmaking debut here)  shoots the events.

Interesting techniques abound, as Burnham uses extreme zoom-in shots to put the viewer in the shoes of Kayla at her most awkward moments, and pulls far away at moments that are emotionally devastating, leaving her as alone onscreen as she feels inside. The music score is also unique, as composer Anna Meredith veers between barely perceptible keyboard strokes at pensive moments and loud, overbearing keyboard squawks at moments that represent when Kayla is overwhelmed by life. “Blindspotting” also uses innovative techniques to draw viewers into its events on the streets of Oakland, where it follows two lifelong best friends— African-American Collin (Daveed Diggs) and white Latino friend Miles (Rafael Casal)— as they plod through life with crushingly boring jobs as movers. Collin has three days left on a year-long probation and just wants to get through the weekend without incident, but when he sees a white cop (Ethan Embry) shoot an unarmed black man in a foot chase, dark conflict starts to seep into his largely carefree life.

Collin is also in a state of vigilance with regards to Miles, who has a young son with his longtime girlfriend yet also lives on the constant edge of agitation. Miles feels that he always has to prove himself to Collin and the rest of his black friends, while also worrying that gentrification is going to force himself out of the only way of life he knows.

These boiling tensions are played out in largely funny fashion for most of the film’s running time, with the police shooting receding into the background until a brilliant, unexpected twist. How Collin and Miles handle the situation is riveting, while also leaving room for an affecting and memorable performance by Embry.

Diggs and Casal wrote the film themselves and struggled for nine years to get it made, finally reaching their chance when Diggs won a Tony for his dual role as Thomas Jefferson and Marquis de Lafayette in the Broadway smash “Hamilton.” Casal has long been a star performance poet in his own right, with Diggs also the leader of an acclaimed rap group called Clipping. The duo’s way with words in those endeavors lend “Blindspotting” a vibrant sense of language that gives vibrant voice to what it is like to be young and a minority in a rapidly changing society.

It’s also the kind of film that can open minds and hearts to those struggling in the inner cities of any age, and has a surprising empathy for all of its characters that is too often lacking both in Hollywood and in our day to day lives interacting with others.