As summer winds down and the supply of mega-budget blockbusters trickles out, Hollywood often releases some of its most blasé duds of the year over the Labor Day weekend each year. This weekend’s new release “Operation Finale” offers a mix of good and bad qualities by presenting a strongly acted and good-looking historical thriller that unfortunately runs out of thills long before its ending.

Recounting the tale of how a team of undercover Israeli Jewish operatives teamed up in 1960 to capture and extract the vile Nazi leader Adolf Eichmann from his new life-in-disguise in Argentina, “Finale” stars Oscar-winning actor Ben Kingsley as the deceptively stoic “architect of the Final Solution.” Leading the charge against him are Oscar Isaac (Poe Dameron in the newest “Star Wars” movies) as Peter Malkin, who we learn in a series of devastatingly effective flashbacks lost his wife and children to heartless Nazi slaughter. 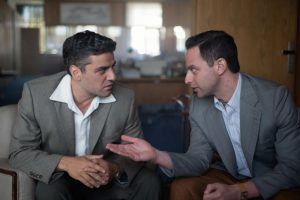 Isaac has been receiving intel on the search for Eichmann from anti-Nazi compatriots tracking Eichmann and other former Nazis in Argentina, where many of the evil regime fled after the war. A young woman named Sylvia (Haley Lu Richardson) flirts her way into a couple of dates with a handsome boy named Klaus Eichmann (Joe Alwyn) , who claims his father died back in Germany and he’s just being cared for by Adolf as a family friend in  his new persona.

When Klaus stupidly decides taking Sylvia to a secret Nazi meeting would make for a great date night, she turns out to be a spy and passes word through her own father to the Israeli Mossad special forces unit. The Mossad leaders decide that it would be more worthwhile to have Adolf testify and spell out the Nazi atrocities on worldwide television rather than merely assassinate him, so Malkin is enlisted to lead the mission.

For the first half of the film, director Chris Weitz (“American Pie,” “A Better Life”) keeps things moving with some real zip and pizzazz, aided greatly by  a bouncy and inventive score by Alexandre Desplat.  Yet after cranking up the tension throughout the first hour, once Adolf Eichmann is captured, the film completely runs out of steam.

The reason is that the fearless team finds that the Nazi-friendly Argentine government has gotten wind of their plot and ensured that the next safe flight out of the country won’t be available for ten days. Thus begins the need for them all to hide out with Eichmann, and engage in a subtle battle of manipulation as they try to make him sign a paper agreeing to leave the country with them and he tries to play on Melvin’s sympathies due to the fact that despite being  a monster, he’s a devoted family man.

This might still sound intriguing, but the unfortunate fact is that the hideout scenes are dramatically inert to a stunning degree. When the mood-lifting high point of the second hour is a comical scene of the team watching Eichmann taking a dump as an example of not letting him out of their sight, and their wincing reactions to the farts he’s producing, something has gone off the rails.

On the other hand, there are moments scattered throughout – including the second half— that are unusually thoughtful for a Hollywood summer release. Melvin’s flashbacks slowly acquire a devastating impact, while there is also a strong scene in which he provides extra care and compassion for the withering Eichmann in which he might also be getting played psychologically.

A big but brief problem lies in the way the film needlessly drops in a couple of quick anti-Catholic lines. It is made clear that Klaus Eichmann, the son of Adolf who takes the Catholic Sylvia to a secret Nazi meeting, also considers himself Catholic in a matter-of-fact statement.

Worse, when the Nazi meeting’s leader asks how his followers should handle the Jews in Argentina, it’s a Catholic priest who pumps his fist in the air the fastest and yells out  “Soap!” – leading the rest in attendance in a vile call for Jews to be killed and turned into soap. These are brief moments but disconcerting nonetheless.

World War II history buffs may like this more than I did, as the filmmakers and cast clearly had noble intentions. But considering how utterly slow and anticlimactic the film becomes in its final hour, it’s impossible for me to justify saying  the film is worth paying today’s ticket prices. I was praying for the finale of “Operation Finale” long before it was over, and chances are so will you.