This week I’m focusing on a movie that’s in theaters, although it’s playing just 1200 screens – about a third of what most major releases get these days. It also came out last week, so please go support it so that it’s not driven out of theatres for next week.

I’m talking about “Here Today,” a fantastic new movie that stars and was co-written and directed by Billy Crystal in his first major movie in nearly a decade and what may be his best movie ever, next to “When Harry Met Sally.” While only 47 percent of the critics listed on “Rotten Tomatoes” gave it approval, it’s clear that the naysayers simply don’t know how to handle a deeply human story in an age of computerized bombast at the box office.

The movie follows Charlie Burnz (Crystal), a legendary TV comedy writer who’s now in his 70s and still working on a show called “This Just In!” that’s clearly a stand-in for “Saturday Night Live.” He hangs onto the job because the head writer was his protégé and feels that aside from still writing some good jokes for the show, Charlie has a great sense of comedy ethics and keeps the younger writers from becoming too crass on the air.

Charlie has an unusually rigid daily routine that includes a rigorously followed walk to work each day in which he tells himself to turn left or right at various spots. His routine hides the fact that he’s secretly battling the onset of dementia, a fact that he hasn’t shared with his coworkers or his grown son, daughter, and teenage granddaughter. 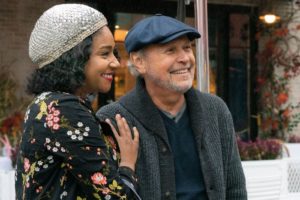 Charlie’s life is thrown for a loop one day when he has lunch with a 30ish Black woman named Emma Page (Haddish), who won the outing as a prize in a charity raffle. She has no idea who Charlie is or why he’s famous, since her now-ex boyfriend bid on the lunch prize because he was a great fan of Charlie’s work, and now she’s using the prize for a free lunch and to get back at her ex.

But when Emma – a jazz singer who performs in cabarets and on the streets for tips – has a hilariously bad allergic reaction to a seafood salad and winds up in an ER with no health insurance, Charlie foots the $11,000 bill. While he doesn’t expect Emma to repay him, she enters his life at the most unexpected times to hand him sack fulls of cash as repayment, and an unusual and deep friendship is born.

Charlie’s grown kids already resent him for the way their mother died decades ago, but now look at his friendship with Emma in disdain as they assume the two are now an odd couple. But what is building between Emma and Charlie is infinitely more complex and beautiful, and the two learn great things about life from each other as Emma has must decide how close to get to him while Charlie’s mental condition worsens.

“Crystal knocks it out of the park…”

“Here Today” might seem like a politically correct movie since it involves Black and white leads coming together, but it doesn’t have any agenda to push. It is simply a powerful, universal story of friendship, caring and reconciliation that any adult or teen can enjoy.

Crystal knocks it out of the park in his three roles. In particular, he works wonders with Haddish, a highly talented comedian turned actress who has previously largely wasted her talents on crass and stupid movies like “Girls Trip” and “Like a Boss.”

Haddish is a revelation here, a joy to behold in her frequent funny moments and lively spirit, but also beautifully playing the serious emotions that pop up throughout. Perhaps most surprising is her singing ability, as she tears through a series of fun jazz standards but really gives her all to a show-stopping take on Janis Joplin’s rock classic “Piece of My Heart” at a bat mitzvah reception.

This is Oscar-quality work that will sadly be likely ignored since the movie is being lost amid the noisy crowd of summer blockbusters and dumped by its distributor Sony into just one-third of the theaters most major releases play in.

The movie’s handling of dementia and aging is superb, with Crystal believably losing his memory in noticeable yet gradual phases. While he pulls off the drama exceptionally well – especially in a furious rant about his condition – he also has a stunningly energetic comic centerpiece in which he bursts onto his TV show’s live set and delivers an amazing tirade against a hapless cast member’s mispronunciation of dialogue.

Rated PG-13 due to its casual use of mild obscenities, and a couple of uses of major profanities. Viewers may rightfully be shocked when Charlie curses at God when lamenting his illness, but nearly anyone would be furious in that situation and the movie more than makes up for this offense with its powerful message and its depiction of Charlie and his family as devoutly practicing Jews.

Sadly, “Here Today” isn’t getting much of a chance in theatres, so by all means check your local listings and see it if you can, before it’s next week.