In 2015, a 14-year-old high school basketball star named John Smith was running atop the ice of a lake near St. Louis when he fell through and disappeared underwater for 15 minutes.  It was already surprising when a paramedic was able to locate and pull his freezing body out of the water, but he was considered a certain death.

Nonetheless, he was airlifted to a hospital, where doctors engaged in an array of desperate measures for a full hour before declaring him dead.  Yet moments later, Smith’s devoutly Christian mother burst into the room and prayed in a loudly demanding voice for God to bring John back to life – and his heart started to beat again. As such, he made medical history for being revived after the longest period of cardiac failure ever recorded. 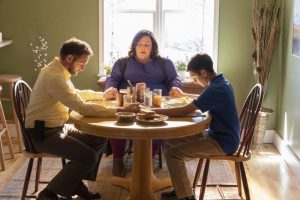 That remarkable resurrection, and the harrowing weeks that followed as John defied one set of odds after another to make a complete recovery, form the basis of the new film “Breakthrough.” The true-life tale has staked out a spot on Easter weekend, when another famous resurrection is memorialized by Christians.

It manages to rise above the usual treacle of other faith-based films through solid performances, some unexpectedly nuanced moments and impressive direction by veteran TV director Roxane Dawson in her feature film debut.

The film stars Chrissy Metz of the NBC hit series “This Is Us” as Joyce Smith, John’s mother, and she makes the transition to the big screen as a commanding presence. It’s a perfect fit for her, as her millions of fans already enjoy seeing her front and center amid the high emotions found in her series.

“Breakthrough” begins by showing John as an outsider at his private Christian high school, since he was a native Guatemalan adopted young into an overwhelmingly white American suburb. He’s going through normal yet mild teenage rebellion, treating his adoptive parents with sullen silence, when his tragic fall through the ice occurs.

Once Joyce’s impassioned prayers appear to bring John back to life, he still has to fight to reclaim his functions as his doctor (Dennis Haysbert) repeatedly warns Joyce and her husband Brian (Josh Lucas) that John will likely be trapped in a vegetative state for the rest of his life. But as Joyce and her pastor (Topher Grace) lead ever-growing numbers of people praying for John, one level of recovery after another occurs, reinforcing Joyce’s faith while shaking the doubts of others.

A movie like “Breakthrough” gives away much of its storyline right in the very fact of its premise – no miracle, no movie –  and it does have a few too many prayer scenes  bogging down a 15 or 20 minute stretch in the middle. But director Dawson brings harrowing tension to John’s fall through the ice and the battle to save him, and later uses inventive visuals to convey his inner battle for survival.

“Breakthrough” has a couple of interesting aspects to it beyond what’s on screen. It marks the first 20th Century Fox film to be released under that legendary studio’s new ownership under Disney after their recent mega-merger, so the industry will be watching to see how things turn out at the box office.

It also marks the first film by its lead producer DeVon Franklin at Fox after a lengthy and successful run producing faith-based films at Sony (“Heaven Is For Real” and “Miracles from Heaven”  were among his hits there). The past 15 years or so since “Passion of the Christ” became a blockbuster have seen a growing number of Christian-themed films hit theaters, but most have been heavy-handed, treacly or downright incompetent (“God’s Not Dead”).

Franklin has succeeded by placing quality actors in the service of stories that manage to include some levels of nuance that make them appealing to audiences beyond the proverbial choir. Those looking for a little inspiration on this Easter weekend will likely find it here.