It’s getting harder and harder to find romantic comedies in theaters these days. Comedies as a whole are dying as a genre, and Netflix, Amazon and Hulu have been left to pick up the pieces, with Netflix especially successful at it with a seemingly non-stop string of popular romcoms.

But Amazon Prime has now raised the bar with the terrific and touching new eight-part series “Modern Love,” which brings to life eight stories from the New York Times’ popular column of the same name. That column enables people to share their unique experiences with romance in New York City, as real-life, average, non-journalists submit essays in the hopes of sharing their stories with others and spreading some hope that true love can still exist in the age of hookup apps like Twitter and rampant divorce.

The TV debut of a terrific romantic filmmaker

The series was created by John Carney, the man behind a trio of the most romantic films of the 2000s: 2007’s “Once,” 2014’s “Begin Again” and 2016’s “Sing Street.” All three were critically acclaimed but relatively low-grossing movies, but they wove in wonderful original pop music into their plots, with “Once” and “Begin Again” both having Oscar-nominated songs on their soundtracks. I liked “Once” less than most who’ve seen it, but the other two made my top ten films lists for their years.

Each episode is about 30 minutes long, with some episodes featuring top-flight stars like Tina Fey, Anne Hathaway and Andy Garcia. All told, four Oscar nominees (Jane Alexander, Dev Patel, Catherine Keener and Garcia) and one Oscar winner (Hathaway) are in the cast, a reflection of how top notch the material is.

Each episode also shows a unique slice of love lives, and while the show is rated TV-MA (the equivalent of motion picture R), it barely merits that severe of a rating. Some episodes have just one or two “f” words, while a couple have a lot, but there’s only one serious love scene in the entire series, and no nudity or sex. This is a high quality show that is endlessly entertaining and moving, while thankfully having nothing to feel awkward about watching.

Here’s the scoop on each episode, including the minor ways in which there’s moral content to be aware of…

Episode One: “When the Doorman Is Your Main Man” A young woman named Maggie (Cristin Millioti) finds that her doorman Guzmin (Laurentiu Possa) is always critically observing her choices in men. But when she winds up unexpectedly pregnant, his loving concern for her proves to have surprisingly dramatic results on the decision she has to make. This episode is beautifully pro-life and has just a sprinkling of foul language impacting it, making this one of the most special episodes I’ve seen in any series in a long time. 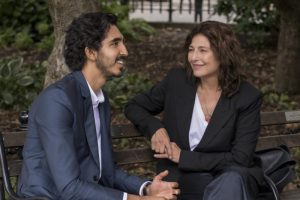 Episode Two: “When Cupid Is a Prying Journalist” Switching from the two terrific unknown actors in the first tale, this one features Catherine Keener as a journalist interviewing the successful head of a dating app (Dev Patel) for a profile. When she asks him if he himself has ever been in love, each winds up telling surprising stories that have touching payoffs. Again, hardly any foul language and nothing else to worry about.

Episode Three: “Take Me As I Am, Whoever I Am” Anne Hathaway lights up the screen as a woman suffering from bipolar disorder, breaking into song and dance numbers when she’s manic and bringing heartbreaking realism to the down moments. This episode shines an important spotlight on a condition that affects far more people than we realize and shows that openness about it can be the answer to a consistently happier life. Relatively minor language, nothing else.

Episode Four: “Rallying to Keep the Game Alive” Tina Fey and John Slattery of “Mad Men” play a longtime married couple who are going through counseling since they are starting to wear on each other after decades. Just as they’re about to call it quits, the therapist convinces them to try something active to do together, and they take up tennis, with results that are by turns funny and inspiring. This one has the most foul language of any episode, as the couple’s fights and their son’s hilarious performance in his foul-mouthed drama club rendition of the classic play “Glengarry Glenn Ross” result in lots of F words that should still be fine for most to handle.

Episode Five: “At the Hospital, An Interlude of Clarity” The most slapstick episode features two relative unknowns, like the first episode. Sofia Boutella as a beautifully exotic yet sweet woman named Yasmine and John Gallagher, Jr. as the hilariously neurotic Rob are on their second date when things start to get frisky. But Rob winds up breaking a wine glass into his forearm, resulting in a trip to the hospital that starts out funny and winds up beautifully revealing. This is the episode that has the only sexual content, with Yasmine down to her bra and panties during the makeout before things explode in funny fashion.

Episode Six: “So He Looked Like Dad. It Was Just Dinner, Right?” This is the most surprising episode in the series, as a 20something woman named Maddy (Julia Garner) appears to have an attraction for an older man at her office. But the relationship is not what he or anyone watching will possibly expect, even as it’s again, touching. Limited language again.

Episode Seven: “Hers Was a World of One” This is probably my favorite episode in the series and the other one that’s surprisingly pro-life, as it follows a young homeless woman named Karla (Olivia Cooke), who’s pregnant and having to decide whether to let a longtime gay couple adopt her baby. This has some of the most surprising twists in the series, but winds up with an absolutely wonderful speech from one of the men to the baby after it’s born. It features the usual smattering of foul language, and does portray the men’s same-sex marriage in a matter-of-fact positive way, but that’s hardly the focus of the story and there’s nothing sexual involved. Just a terrific story. 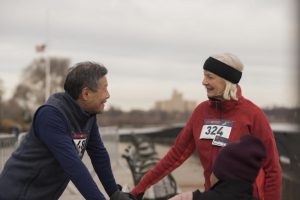 Episode Eight: “The Race Grows Sweeter Near Its Final Lap” The final episode initially follows the late-in-life love story of a woman named Margo (Jane Alexander) and Kenji (James Saito), who meet while involved in fun runs, and shows how the elderly can find love just as strongly as younger people. It also brings back all the major characters to resolve their stories in fun and fascinating ways.

All told, this is a really terrific series that I can’t recommend highly enough. Amazon Prime has lots of other great shows too, and the option of building a massive music library, plus all the great deals you’ve already known about. It’s definitely worth the $14 it takes to order for a month, and enjoy four hours of great entertainment in any dose you’d like.