When you think about World War II, most people instantly remember Adolf Hitler and his evil armies of Nazis who stormed across Europe. It’s easy to forget we were fighting three enemies at once, with Japan and Italy also ruthlessly destroying lives in other parts of the globe – and as decades pass and the world’s bad guys become harder to define and defeat decisively, it’s helpful to have reminders of the brave sacrifices American soldiers made in the name of saving freedom for the entire planet. 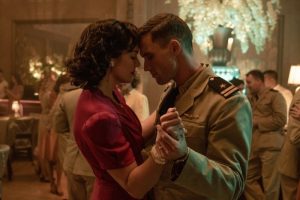 The new movie “Midway” has arrived, and offers an exciting and stirring reminder of those points. Directed by Roland Emmerich, who has built a career upon blockbuster action epics ranging from “Independence Day” and “The Day After Tomorrow” to “2012” and “White House Down,” this war epic combines a classic tale of courage with the best special effects Hollywood has to offer and a star-studded cast to bring the war-movie genre explosively back to life.

“Midway” is the first Hollywood World War II epic in nearly 20 years, dating back to Ben Affleck’s “Pearl Harbor” in 2001. That movie put a ton of effort into its visuals and not enough into its storyline, with its centerpiece being a recreation of the Japanese attack on the US Naval base that was stunning to watch but also dragged on for nearly 40 minutes. It also focused too much on a love triangle among two fictional male soldiers and the woman that came between them,  leaving viewers confused about whether it was a war movie or a romance.

Wisely, “Midway” goes in the opposite direction, putting the focus on both the harrowing attacks our American troops endured and the combination of stunning firepower and crafty strategizing that helped ensure the ultimate victory that saved the planet. And it’s a welcomed approach to focus on the battles we faced against imperial Japan rather than the overused focus on Hitler found in far too many other WWII movies.

The film opens on a tense discussion between an American intelligence expert named Edwin Layton as he speaks with a moderate Japanese military leader in 1937 Japan, four years before the Japanese attack on our Pearl Harbor naval base drew us into the war. Layton is warned that if America and the West push Japan’s militaristic factions too hard, they will strike back viciously to assert their strength in the world.

Four years later, that warning comes back to haunt the US when Japanese bombers assault the Pearl Harbor naval base in a devastating surprise attack. Emmerich captures the insanity of it all with effects that send planes flying off the screen, crashing into naval warships and some stunning shooter’s-eye and pilot’s-eye views of the action as the American forces fight back.

But once the dust settles and the shocking cost of the attack is fully realized, the brilliant Admiral Nimitz (Woody Harrelson) is called in to oversee the retaliation. While the movie is stacked with several more impressive battle sequences, centered upon wild man pilot Dick Best (Ed Skrein) and ace tailgunner Bruno Gaido (Nick Jonas), “Midway” also shows the heavy strategizing that occurs as America and Japan escalate – with the US finally realizing they have to stage a decisive attack on the Japanese base at Midway Island in order to save the West Coast from an even bigger assault that could topple America and the free world.

As I’ve mentioned, “Midway” delivers best when it’s serving up its intense bouts of action. Its pre-end credits sequence showing the results of what happened to each of the heroes depicted also drives home that these were real men putting their lives on the line to keep the world free, and there’s no understating the impact of that.

Also intriguing is the fact that Emmerich and writer Wes Tooke take a more balanced and mature approach than many war films of the past. While Japan clearly initiated the attack, and it’s made clear that they also killed a huge amount of innocent Chinese civilians, the average Japanese soldiers are seen as young men who, like their American opponents, were just following orders.

Lest one think that the filmmakers aren’t fully on the side of America’s forces, however, the world premiere on Nov. 5 featured three of the actual survivors of the Battle of Midway and an appearance by the US Navy Color Guard, in addition to numerous current Navy members in the audience. As the movie screen filled with a giant image of the American flag, the Color Guard marched out and led the audience in the National Anthem before a wild round of applause from the audience. Surprisingly for Hollywood, everyone in attendance was standing.

But there are a couple of weak spots. The heavy amount of strategizing involved and the story’s jump from battle to battle sometimes makes it confusing, blurring all the battles together. And aside from the hotshot team of Skrein and Jonas, there aren’t a lot of chances for the rest of the cast to standout, although the often-bald and overly energetic Harrelson is interesting to watch.

Overall, “Midway” stands out as a refreshing, giant-scaled throwback to a war genre that’s rarely attempted anymore. If you’re looking for an often thrilling and patriotic look back at some of the bravest men America’s ever known, this is a great way to go.