Anyone with a decent childhood has seen the original “Mary Poppins,” the 1964 cinematic gem that won Julie Andrews an Oscar for playing one of the greatest characters in cinema history: a magical nanny who could fly, bring real-world kids into a cartoon world and generally turn a bleak world cheery. In a world dominated by “Star Wars” sequels and superhero flicks counting as family-friendly fantasy fun, it’s long overdue for a studio to step up and bring some truly inventive joy to the big screen– and Disney has stepped up to the challenge with the fantastic new sequel “Mary Poppins Returns.”

Starring Emily Blunt as Mary since Andrews is in her 80s now, the new “Poppins” focuses on the two kids whom Mary helped in the original– the brow-beaten and beleaguered Jane and Michael Banks– as they are mired in struggles as adults. Michael has been a widower for the past couple of years, raising three children alone while struggling to get by with a bank teller job supplementing his slowly dying ambitions as an artist. Jane is a labor activist (although the movie thankfully avoids becoming political or PC in any way, shape or form), and financially unable to help her brother when his bank serves him a foreclosure notice on his house. 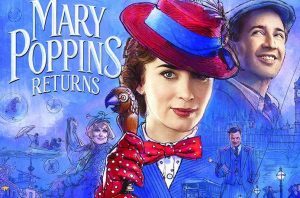 Finding himself and his kids in danger of becoming homeless, Michael has lost all sense of the exuberant joy Mary Poppins instilled in him as a child. But when his youngest son finds Michael’s old, long-forgotten magical kite that he had flown with Mary as a child, and loses it in a windstorm, Mary magically appears to save it and re-enters Michael’s and Jane’s lives by insisting on being his children’s nanny.

Since Dick Van Dyke is over 90, his character of Bert the singing and dancing chimney sweep is written out of the movie by having Lin-Manuel Miranda play Jack, a lamp-lighter who was an assistant to Bert as a boy. Just as Blunt succeeds in every imaginable way in filling Andrews’ magical shoes as Mary, Miranda brings his live-theater zest and energy to the screen in tremendous fashion.

I don’t want to give away many more details of what happens from there, because I was continuously astonished throughout the film by its non-stop parade of incredible songs and visual delights. While the fact that 54 years of technological advancements make this movie’s effects even more stunning than the original’s, the Disney team wisely uses hand-drawn animation for large sequences of the film in order to match the look of the original. It’s the first time in nearly 15 years that Disney has returned to its original format, and the decision is a masterful one.

But how are the songs? Utterly amazing as well, thanks for asking. While no one tune is quite up to the legendary “Supercalifragilisticexpialidocious” (yes, that IS how it’s spelled!), there are many that come close and are nonetheless far ahead of the majority of songs in musicals today.

Bringing it all together is director Rob Marshall, who was Oscar-nominated for his directing on the Best Picture-winning musical “Chicago” back in 2002. That Broadway adaptation singlehandedly revived the musical as a viable genre in movies after decades of dormancy, and he pulls off Oscar-worthy magic here with a completely original set of songs and a terrific new story.

Some worried that Disney would screw things up by forcing agenda-driven touches into the story, like “explaining” why the beautiful Mary is single by revealing she’s a lesbian, or having Jack sing songs about being deported. But thankfully, none of that is here– just pure, unabashed joyousness that anyone of any age or political stripe can enjoy. This is an absolute must-see!