Truly great mysteries are in short supply these days at the movies. So are truly funny comedies. The new movie “Knives Out” solves both problems at once by serving up a star-packed cast in a whodunit that also is loaded with funny lines throughout.

Moving at a relentless pace filled with twists, turns and flashbacks

Moving at a relentless pace filled with twists, turns and flashbacks that reveal the truths beneath its surface like an endlessly peeling onion, “Knives” creates a special level of fun by giving views plenty to consider along the way to solving its core crime. And watching an array of longtime favorite actors each getting their own moments to shine is a grin-inducing joy to behold throughout.

The movie centers around the eccentric members of the family of Harlan Thrombey (Christopher Plummer), a hugely successful mystery author who has gathered them and their loved ones at his giant, creepy old mansion to celebrate his 85th birthday. It seems like a festive affair, but the next morning everyone is shocked when his housekeeper Fran (Ana de Armas) finds Harlan dead with his throat slit, the victim of what appears to be a suicide.

But that assumption is quickly called into question, for the family was rife with discord and several of them had strong motives to want him dead. Harlan knew that his son-in-law Richard (Don Johnson) was having an affair and was threatening to expose him to his daughter Linda (Jamie Lee Curtis). His daughter-in-law Joni (Toni Collette) was double-dipping into his fortune to fund her lavish lifestyle and pay for her daughter’s high-end college tuition before Harlan found out and cut them off. 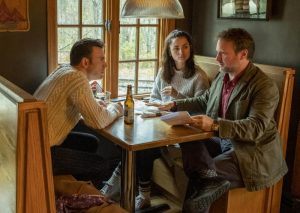 On top of that, his son Walt (Michael Shannon) was just fired from running Harlan’s publishing company and his grandson Ransom (Chris Evans) was cut out of his will for being a lazy sponge. In reality, Marta had accidentally injected Harlan with a morphine overdose due to having mixed up her medicine bag, but the question is: who sabotaged her bag, and why?

And so the family is called back together for a series of interrogations by an offbeat detective named Benoit Blanc (Daniel Craig), who was mysteriously hired by an anonymous funder and subjects each of them to a hilarious set of questions and quirks that makes one thing clear: nothing is as it seems.

Writer-director Rian Johnson is clearly having a blast throughout, returning to the world of quirky independent-style films that he made his mark in with “Brick” and “The Brothers Bloom” before being given the chance to break into blockbusters with the most recent “Star Wars” film, “The Last Jedi.” He’s a master of creating inventive characters and unpredictable plotting when he’s in the smaller indie world, and he outdoes himself with his intricate plot revelations and the colorful array of performances he draws from his cast here.

There are also some side touches that make the film extra-amusing. Marta has a medical condition that makes her throw up anytime she tells a lie, so she quickly has to give straight answers to Blanc’s questions – a fact that makes Blanc recruit her as his main sidekick in his investigation.

The family’s oldest relative, a 100-year-old aunt who seems to just stare into space but is actually catching everything, is a hilarious addition throughout. Add in a ridiculous chase that Blanc himself describes as “the stupidest car chase ever,” and you’ll find yourself caught amid waves of laughter throughout.

Daniel Craig is a hoot to watch as Blanc, as the British current James Bond pulls off a surprisingly solid Texas accent for the role, even as his very French name is in tribute to the famed French sleuth Hercule Poirot in many of Agatha Christie’s best mysteries. Seeing him play against his usual tough-guy persona keeps viewers on their toes as much as the family members are while under his inquisitive spell.

Among the other standouts… 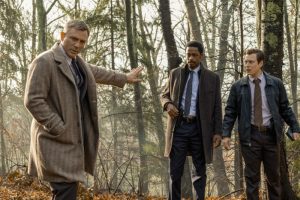 Among the other standouts are Don Johnson’s Richard, who exudes an oily charm throughout and an utter inability to keep his own story straight that steals the show with some of its biggest laughs. Chris Evans proves he possesses a fun magnetism outside of his films as Captain America, Curtis makes a great uptight and sarcastic family matriarch and Collette is hilarious with an utterly sour demeanor.

On top of being a great mix of mirth and mystery, “Knives” also has some sharp-witted fun with satirical class warfare as the family takes digs at Marta yet she finds a way to turn the tables. It’s also a mostly clean film, with some swearing throughout including 2 F words, but nothing else to cause offense. Put it all together, and this is a refreshingly original film that will have you dissecting its twists well into the night after seeing it.