Judy Garland made millions of fans happy throughout her all too short 47 years on the planet. But she couldn’t find a way to make herself  happy, and that sad fact is front and center in the current movie “Judy,” starring Renee Zellweger in a stunning and likely Oscar-winning performance as the beloved icon. 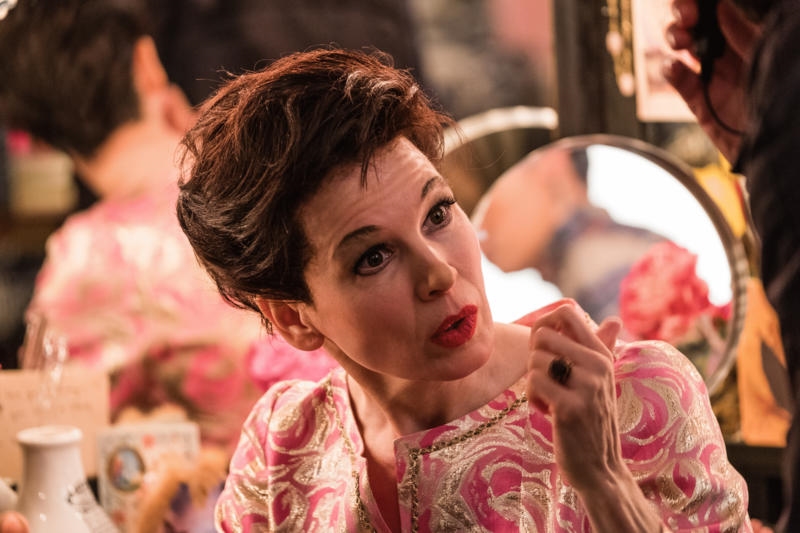 The film captures the final attempt by Garland to have a success via giant cabaret-style shows in London during the winter of 1969, mixed with tragic memories from her childhood acting career. Zellweger somehow manages to pull off the part all the way from her fresh-faced and hopeful teen years all the way through the time-hardened look of her final months.

The film opens with an encounter between a sixteen year old Garland and MGM studio chief Louis B. Mayer on the set of “The Wizard of Oz”. Feigning fatherly concern for her, Mayer delivers a subtle yet emotionally abusive lecture at Garland for taking a break, even as she pleads with him that she worked 16 hours the day before and could barely function by nighttime.

The legendary executive tells her that she can be sent back to a normal life as a forgotten housewife in the Midwest if she doesn’t follow his rules, and that prospect scares her into accepting a cruel regimen of constant supervision that affects her ability to sleep and eat normally. We see her forced to take pills to “take the edge off” her hunger and others to help her sleep – both of which come back to haunt her in the main period of the film, when she appears worn out and unable to function without chemical assistance.

“Judy” next leaps into the winter of 1968-69, with Judy desperately riding around Hollywood with two of her young children just to find a place to stay for the night. The long-term hotel they’ve been living at refuses to let them stay since her account is seriously delinquent. She winds up dumping the kids off at the home of one of her four ex-husbands, Sid Luft, before crashing a party and staying the night platonically, yet flirtatiously, with a much younger man named Mickey.

Sid hits her with the news that he wants to keep the kids nearly full-time throughout the school year and give them a normal childhood, since they’ve spent years traveling and performing with her. Desperate to make enough money to buy a house, Judy accepts a last-ditch chance at a comeback with the London shows – a run in which she has to face her past memories, her current addictions and a highly complicated relationship with Mickey.

“Judy” is a fairly traditional-style film biography, but considering that it portrays a legend whose career has been inspiring audiences for over 80 years, that’s exactly the right approach to take. It’s at times a little slow, but that too fits the mood of a woman whose life and career are slowing down as well – her entire life is centered upon the hour or so she’s onstage each night.

But those stage scenes are spectacular, particularly in the way that Zellweger shows that Judy was often a complete mess of emotions, alcohol and pills right up until the moment she takes the stage. The tightrope she walks between nervous wreck and dominating diva is remarkable to behold, and the musical numbers she belts out are the very definition of showstoppers.

The most powerful scenes in the movie, however, come when Garland meets a homosexual couple who are huge fans but were unable to meet her on a previously because one of them was jailed on obscenity charges. They are the only two people in the film who are truly reaching out to Judy with love, and her loving response in return is indicative of the deep bond Garland has had for decades with the gay community.

The rest of the cast is solid but this is totally Zellweger’s show. What makes her performance particularly affecting is the fact that her own career has mirrored Garland’s in some significant ways: she made America fall in love with her as a young woman in 1996’s “Jerry Maguire”, hit superstardom with the “Bridget Jones” movies and earned an Oscar for “Cold Mountain,” and then hit the skids for a few years. The chance to play Garland was a terrific opportunity for a comeback, and Zellweger has taken the reins with everything she’s got. Critics and moviegoers are responding strongly, as she is considered the frontrunner for Best Actress this year.

Aside from her stellar performance, “Judy” serves as a sad reminder of the travails that child actors and women have to endure to make it in Hollywood. It also is a tragic lesson in the fact that fame and fortune are fleeting, and can’t take the place of true genuine connection and affection.