There are two words that come to mind when most people hear about Harriet Tubman: Underground Railroad. We’ve all heard her name in history class while growing up, learning about her brave leadership in helping hundreds of slaves escape to freedom via a secret network of safe houses set up along the long journey from the slave-owning states of the South to the free Northern states before and during the Civil War.

Amazingly, there’s never been a movie that focused on her incredible efforts until now. This weekend marks the opening of “Harriet,” a rousing biopic that features a fiery performance by Cynthia Erivo, who won a Tony for her star turn in the Broadway musical version of “The Color Purple” – along with a surprisingly direct portrayal of her immense Christian faith.

The film opens with Harriet, originally known as “Minty,” at a Sunday service in which a black preacher (Vondie Curtis-Hall) leads her and a group of slaves in singing hymns and a sermon that are intended to make them believe in being subservient to their masters. But Harriet sees through the ruse and boldly tries to ask her master to set her and her family free, since she has married a free black man and has legal proof that the master’s father wanted her and her family to be set free years before.

“Tubman’s faith (is) front and center throughout the film…”

When the master scoffs at her and tears the legal document to pieces, Harriet realizes that she is now in danger of being horribly abused and has to make a dash to freedom as soon as possible. Leaving her family and husband behind (she is afraid that if he runs with her and they’re caught, his free status could be taken away), Harriet winds up surrounded on a high bridge over a raging river – and makes a dramatic leap into the waters. 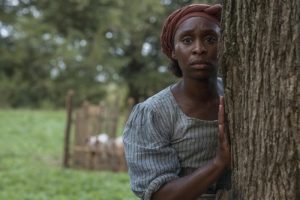 She miraculously survives and manages to reach safety more than 100 miles away in Philadelphia, where she takes on her new name of Harriet Tubman and starts a new life. However, due to the guilt she feels over succeeding while leaving her loved ones behind, Harriet insists on going back to save them as well. That daring rescue, and subsequent determination to save as many other slaves as possible afterwards while dodging the obsessive pursuit of her now-former master’s son Gideon (William Alwyn), forms the heart of the film.

Hollywood has only attempted to tell Tubman’s story once before, in the 1978 TV miniseries “A Woman Called Moses,” starring Cicely Tyson. But the recent trend to telling more stories centered around people of color—and the Treasury Department’s debate over replacing President Andrew Jackson on the $20 bill with an image of Tubman— has finally opened the doors to the new film.

Director/co-writer Kasi Lemmons places Tubman’s faith front and center throughout the film, showing her speaking directly and loudly to God several times in the movie, while also giving Him the credit for guiding her on her safely on her repeated 100-mile treks. It is a pretty remarkable aspect to the movie, considering it is being released by Focus Features, the arthouse division of Universal Pictures, and the fact that “art” films often are even less likely to be faith-friendly than their mainstream counterparts.

The fact that Tubman’s determined spiritual side combines with a gutsy physicality, a sure way with guns both big and small, and a passionate quest for earthly justice makes Tubman a heroine who transcends the often-musty genre of historical films. Erivo, who made her cinematic breakthrough with a fantastic turn in last year’s faith-based thriller “Bad Times at the El Royale,” delivers a performance that is powerful on all fronts and at times seems like a predecessor to Linda Hamilton’s character Sarah Connor in the “Terminator” films.

There are some weak spots to the film, as it drags a bit in the middle while Harriet settles into her newfound free life before feeling called to help on the Underground Railroad. The film also reaches a rather abrupt end while at the cusp of an important battle that has the audience riveted with anticipation.

Alwyn’s performance as the slave-owner’s son, Gideon, is also a bit too smug and mannered to be as frightening as he should be – and his long hair and goatee will likely remind viewers of Leonardo DiCaprio’s far better performance as another evil slave master in the 2012 movie “Django Unchained.”

Stronger supporting work comes from Curtis-Hall as the preacher, who reveals himself to be a much stronger ally against the slave masters than he first appears, and by Leslie Odom, Jr. as the Underground Railroad’s head, William Still. Another interesting touch comes in the way that Lemmons shows Harriet communicating with her fellow slaves by singing hymns whose lines serve as coded secret messages to her fellow slaves. It’s a tactic that is both an effective tension-builder, as well as a perfect showcase for Erivo’s outstanding voice.

Overall, Lemmons’ and Erivo’s ability to effectively pull viewers’ emotions in two directions at once is an impressive feat. By providing Tubman’s life with a handsomely mounted showcase, it’s also an entertaining film that fulfills a far greater purpose.