The world is a confusing place these days for many millennials – the current generation of teens and twentysomethings who, according to polls, have been largely raised without any traditional religion or concept of God. Yet many studies also show that there is a yearning for a spiritual life, purpose and meaning among many of these same young people, and that’s a feeling all ages can relate to. 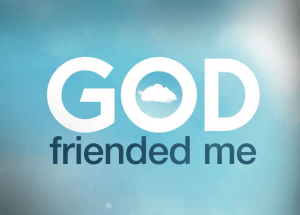 God Friended Me on CBS

CBS has tapped into this quest by creating the terrific new series “God Friended Me” (premiering Sunday, Sept. 30), which plays like a “Highway to Heaven” in the social media-driven present day. The show is centered around a young African-American man in New York City named Miles (Brandon Micheal Hall), who’s the son of an Episcopal priest named Arthur (Joe Morton) yet hosts an atheism-themed podcast that he hopes to sell to the giant satellite-radio company SiriusXM,

A childhood trauma has led Miles into losing his faith, to the disappointment of his father and bartender sister. But just as he is preparing to meet with a SiriusXM exec about selling his show, he starts to get non-stop friend requests from someone claiming to be God on Facebook. God’s avatar, or account image, is of a cloud in the sky, so Miles thinks it’s a prank, until someone also starts sending him other friend suggestions for two people named John Dove (Christopher Redman) and Cara Bloom (Violett Beane). 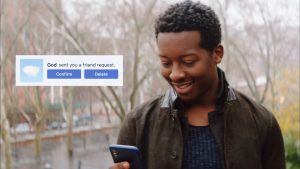 God friended me on CBS

Just as he’s about to angrily dismiss all the requests, Dove literally runs into him on the sidewalk while his girlfriend is dumping him. Stunned, Miles follows John down into the subway, just in time to save the distraught dumpee from jumping in front of a train.

Now certain that there’s more to the story, and dying to find out who’s bothering him and why, Miles asks his tech-savvy coworker Rakesh (Suresh Sharma) to find the IP address of the computer where the requests are coming from. He also decides to find Bloom, who turns out to be a website journalist suffering from long-term writer’s block— and who decides that the search for “God” as a Facebook presence might be the story to break her out of her slump.

Thus the wheels are set in motion for a show that has solid performances across the board, fun dialogue and personalities and a sense of purpose that is often lacking in today’s entertainment age. The mystery has some nice tense moments, and there’s just a spark of possible romance between Miles and Cara, but the real power comes from the family dynamics involved once it is revealed that Cara has mom issues akin to Miles’ struggles with faith and his father.

At a special panel discussion for TV critics held in August, the producers and cast claimed that “God Friended Me” isn’t trying to put forth the idea that God is present in the Judeo-Christian sense or any other specific world faith. But refreshingly, the show actually does embrace

a Judeo-Christian God, thanks to its positive portrayal of Miles’ father and Cara referring to Old Testament miracles in a matter-of-fact way.

The show has some really touching discussions of God’s presence amid tragedies, divided families and how to reconcile them and other universally relatable issues. As Miles, Cara and Rakesh continue their search for who’s behind God’s Facebook account, the idea is that each week they’ll be helping a new troubled person out along the way.

Considering that the show’s creators, Steven Lilian and Brian Wynbrandt, are a writing team from shows like the superhero drama “Gotham” and the “Hawaii Five-O” reboot, it’s hard to tell how faith-based the writers are in their real lives. But the pilot is a big-hearted, entertaining and sincere effort that provides plenty of positive signs to find faith that it will continue to deliver as a show that Catholics and believers of all ages can enjoy.