It’s becoming increasingly rare that movies these days serve up movie stars playing genuine heroes, outside of comic book movies. But the new movie “Ford v Ferrari” serves up a double dose of leading-man swagger, starring Matt Damon as legendary race-car designer Carroll Shelby and Christian Bale as hotshot driver/mechanic Ken Miles. They are brought together by the Ford car company to create the world’s fastest car on just two months’ notice in order to compete in the 1966 edition of 24 Hours of Le Mans, the most difficult race on the planet.

The goal is to craft a vehicle that can beat the latest sports car designed by the Italian kingpins of competitive racing, Ferrari. Shelby used to compete as a driver himself, before a heart ailment that makes his heart race at 130 beats per minute renders him unable to take part in competitions. Miles, meanwhile, has lost races and burned bridges repeatedly due to his hot temper and willingness to bend rules to win.

Friendly rivals team up in service to a bigger cause, offering a strong lesson in overcoming differences

The two have long been friendly rivals, but they set their differences aside when the American-based Ford is in danger of going bankrupt because their boring, traditional cars have fallen out of favor with younger drivers in the new Age of James Bond. When the head of Ferrari mocks Ford’s American cars as vastly inferior and personally insults company head Henry Ford II, the magnate offers a blank check and nearly unlimited freedom to Shelby to create a car that can beat Ferrari at the 24 Hours of Le Mans race.

The race requires drivers to race a treacherous eight-mile track continuously for 24 hours, with the winner being the driver who covered the most mileage within that time frame.

While the two men team up and test countless ways to make their test cars go faster – complete with stunning driver’s-eye-view shots of their driving that’s nearly as gasp-inducing as the actual race footage – they’re tested on a personal level as well. Miles has a wife and son to look out for, and the strain of long hours in dangerous conditions nearly places as much strain on his home life as his long years of financial struggle before Ford hired him for this dream gig. 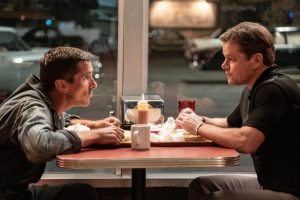 The dynamic duo also have to put up with Ford company in-fighting between the supportive, brash executive Lee Iaccoca (Jon Bernthal) and the constantly interfering Leo Beebe (Josh Lucas), who keeps trying to sabotage Miles’ maverick spirit because he feels he’s bad for Ford’s traditional image. As all these pressures come together with the clock ticking away, director James Mangold and writers Jez Butterworth, John-Henry Butterworth and Jason Keller ramp up maximum tension along with a fun sense of bucking the system to make this a thrilling tribute to the can-do American spirit.

Mangold has consistently been one of the most interesting and acclaimed directors of the past 20 years, having made everything from the Oscar-winning Johnny Cash biopic “Walk the Line” to the Bale-starring Western “3:10 to Yuma” to Hugh Jackman’s swan song as the Marvel superhero Wolverine in “Logan.” Despite their wide range of styles, he always finds the human core of his stories and that is no exception here, guiding his leads through portraying men who were larger-than-life in their ambitions yet deeply human in their fears and frustrations along the way.

Damon and Bale are both having the time of their lives in their roles, with Damon employing a thick Texas drawl and Bale using his natural British accent for the first time in a while. Seeing the two alternately bicker and bond as they work is a great deal of fun, particularly when the two briefly come to blows in a funny fight as Miles’ wife Mollie (Caitriona Balfe) watches in bemused exasperation. Her support of yet concern for her husband, and his fun yet caring bond with his son Peter (Noah Jupe), makes for a strongly positive portrait of marriage and fatherhood throughout.

They’re more inspiring than funny, however, as their efforts show that even as life hands them one challenge after another, their fierce determination and drive to win always keeps them going. The combo of the stars’ charisma and these inspirational moments make this a film that’s eminently entertaining even for those who aren’t racing fans.