Growing up, my mother employed an acronym to quickly communicate an important message to family members during a party at our home.  “FHB” meant “Family Hold Back”.  In other words, if she was worried she had not prepared enough food for all of her guests, she’d whisper “FHB” in our ears, and it told her daughters to partake sparingly.  My mother’s four daughters understood what “sparingly” meant.

My three sons, on the other hand, never quite caught on to the immediate urgency of that SOS.  If I whispered “hold back” in their ear during a party, it might suggest to them that they not eat fromthe buffet while standing atthe buffet in addition to piling food onto their plates out ofthe buffet.   The concept of portion control is not easily easily accessible to growing boys.  I learned to speak a much more specific language to my sons when faced with the crisis of not having prepared enough food for our guests.  And, eventually I just learned to cook more than enough food.

Enough is an almost impossible quantity to measure.  It’s only in having more than enough that we can feel certain we actually have enough.   So, excess equals enough.

We don’t want our checkbooks to reach zero just before the next installment comes in.  We never let our cupboards go bare before we restock.  Here’s how Amazon capitalizes on our fear of not having enough:

“the smart home service that automatically reorders your favorite products before you even know you’re running low.” 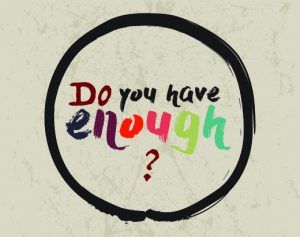 Do you have enough?

Isn’t this opposed to everything Jesus teaches us in scripture?

I never tire hearing of the miracle at Cana.  I revel in the testimony of Jesus feeding the thousands with only a bushel of provisions. But, I don’t actually imitate those examples in my party planning.

I should, however, factor the more important lesson from those gospels into what has been a lifelong struggle to have enough. When I was a young girl, I worried about having enough friends; enough of the right clothes, being smart enough or popular enough.  Were my parents proud enough of me?

As I got older I never thought I made enough money or advanced quickly enough through my professional ranks.

As a wife and mother, I was fueled by the ongoing fear of not being good enough, wise enough, capable enough and admired enough to deserve my husband and three sons.  Did our sons have enough of what they needed to succeed?  Was our home big enough or modern enough?

How long before I rest gratefully in the knowledge that God alone provides enough?  As long as I measure “enough” by what the world thinks is enough, I will never have enough.

Recently, on my radio show, I enjoyed the privilege of interviewing two “millennials” about to enter the Norbertine seminary at St. Michael’s Abbey in Orange County, California.  They were handsome, bright, charming and animated with a zeal for the faith; young men of the world about to leave the world to embrace a life of austerity and spiritual rigor.  For the first two years of seminary they will live without a personal phone, car, internet access and any social engagement outside their monastery.   The fear of inadequacy might easily thwart a young person discerning a vocation to such a daunting religious order as the Norbertines. But they were full of hope and optimism.

One of those future seminarians is a childhood friend of my youngest son, Charlie.

“How will they get along without all the personal interaction they’re used to?” Charlie asked me. “Is that going to be normal?”

“Not normal by current cultural standards,” I said.  “But, normal to God’s vision of how we can live.

“Imagine,” I continued, “how much more they will deepen their interior life, their spiritual foundation, how much more trust they will develop in God’s providence because they don’t have all the distractions of societal mandates. With very little, they will have everything they need to flourish spiritually.  And, the Abbey will make sure they have enough to remain in the world without growing dependent on the world.”

After I responded to my son, I considered how much more my spiritual life might flourish without all the false trappings of modernity and the desire to have more than enough of them.  I was reminded of Woody Allen’s joke from the l977 movie Annie Hall:

‘ Two elderly women are at a Catskill mountain resort, and one of ’em says, “Boy, the food at this place is really terrible.” The other one says, “Yeah, I know; and such small portions.” ‘

The appetite to have more than enough is no doubt the result of our original sin.  In fact, it’s reminiscent of the very first sin that Adam and Eve committed in their desire to have more than the perfect harmony of Eden.   That iconic “Apple” has evolved into a different product today, but with the same name, and the same promise of superiority with its acquisition.  Its allure leaves us feeling that unless we possess Apple’s latest iteration, we may not have enough.

Modern culture wants us to buy into the vapid adage that adorns dish towels and chalkboard signage across America: “You can never be too rich or too thin.”

There should be enough testimony from lottery winners and anorexics to convince us otherwise. Those who run charitable foundations also know that an excess of funds rarely yields virtue.

There’s a famous story about the late Mother Angelica, the mighty little nun who founded EWTN, the largest religious media outlet in the world, with nothing but a couple of hundred bucks and an ill-equipped garage.

Some years after EWTN started to gain traction, Mother ordered two giant satellite dishes in order to expand the network’s reach.  When the satellites arrived, the installer demanded payment before unloading the cargo.  Mother excused herself and made a visit to her Blessed Sacrament chapel.  “Your satellite dishes are here,” she told the Lord. “How do you want me to pay for them?”

With no apparent answer, she left the chapel to tell the driver the equipment would have to be returned to the manufacturer.  But before she got to him, one of her sisters came running with the news that a man was on the phone, a man who wanted to donate the exact amount of money she needed to pay for the dishes.  He had read the series of inspirational pamphlets Mother printed and distributed at local churches and their message had changed his life. He was a rich man who wanted to give away his money to her cause.    The story is well documented.

It’s not exactly the template my husband would like to use in our financial planning.

It is, however, a model for living with confidence in God’s providence.

Life doesn’t give us exact change – there are seasons of plenty and seasons of want, materially, socially and psychologically.  But, if we perceive our worth in God’s value system, then we’ll be more inclined to embrace the wisdom that we always possess exactly what we need. If not always what we want.