Ever since blowing people’s minds worldwide as 2016’s CGI “The Jungle Book” and 2017’s live-action “Beauty and the Best” earned in the ballpark of $1 billion apiece, Walt Disney Studios has been trying to find other classic cartoons they can bring to dynamic new life. This summer brings us their latest effort, “Cruella”, which provides the origin story for the colorful villainess of the classic 1960s cartoon “101 Dalmatians”, Cruella DeVil.

A lavish production starring Emma Stone as the titular villain and Emma Thompson as a rude and possibly evil Baroness who is her sworn enemy, “Cruella” has a terrific look when it comes to costumes, sets and Stone’s unique black and white hairdo. She and Thompson give zesty performances as well, but the script still experiences some major bumps before somehow managing to achieve a perfect final stretch that should leave viewers feeling satisfied overall.

It’s a fun ride, but at 135 minutes it’s 30 minutes too long. Too many sequences drag out with portentous pacing, when the original “Dalmatians” was a nonstop and far zippier romp. But again, the ending is so impressive it saves the day, though as an often dark-toned PG-13 movie, it’s aimed more at adults as a female variation of “Joker” than it is at children.

The movie intriguingly kicks off with Cruella narrating a series of childhood flashbacks after an opening line that tells us she’s speaking after her death. We see her as a baby and young girl named Estella, who was born with half-black, half-white hair and suffered tremendous childhood bullying as a result. To find the strength to endure it all, Estella creates an alter ego in her mind named Cruella and often fights back hard in struggles with other kids.

When she’s forced to leave her school, Estella’s mother decides to move her to London, but makes a stop at a giant estate called Hellman House along the way. Her mom hopes to get financial support from someone at a lavish party there. But in a series of unfortunate incidents, Estella provokes three vicious dalmatians into chasing her through the party and the dogs wind up attacking her mother and sending her to her death over a cliff in a scene that’s reminiscent of Simba’s father’s death in “The Lion King.” Left an orphan who has to fend for herself, Estella winds up in London and taken in by a pair of boys who grow up to be professional thieves a decade later in adulthood. Estella helps them in their elaborate schemes but has dreams of being a successful fashion designer. Through another set of surprising circumstances, she gets hired by the top designer in England, the Baroness, but comes to realize that the Baroness was the woman her mother was begging for help when she died and that she’s wearing her mother’s prize necklace to this day. 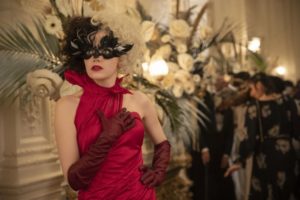 Estella decides to get revenge and steal the necklace back by teaming with her buddies. Giving in to her darker side, she embraces the persona of Cruella and sets out to steal the fashion world’s thunder away from the Baroness while planning the heist of a lifetime.

While there are some very funny scenes along the way, “Cruella” most of the time is played more seriously than its ad campaign leads viewers to expect. It’s far more of a drama and a thriller than a comedy – and if I’d known that going in, I would have likely enjoyed it more throughout by not having off-kilter expectations. But as I have mentioned already, the ending is terrific and there’s something to be said for the fact a 135-minute Disney film can leave you surprised and impressed at the end.
Along with its spectacular sets and costumes, “Cruella” has a stunningly good soundtrack packed with rock classics from the 1960s and ‘70s that give its scenes an extra oomph and hopefully have the extra effect of turning young viewers onto outstanding music that will elevate their cultural mindsets. This movie is a long and bumpy ride, but one that has great pleasures along the way and a highly satisfying destination.

Here’s three other comedy options for the week, all on Netflix:

The romantic comedy genre has been in a dire state for many years now, but Hollywood occasionally produces a clever twist on the stale formula. But the Richard Curtis (Yesterday) movie “About Time” features Domhnall Gleeson and Rachel McAdams at their most charming. Gleeson plays a man who can travel back in time, and uses that ability to alter his romantic future, learning that it’s better to accept life one day at a time with all of its imperfections.

Audiences fell so in love with “Barbershop”, a look at barbershop culture in the Black community that they turned this low-budget film into a franchise with two sequels. Tim Story’s 2002 film is charming and funny, held together by a great cast that includes Ice Cube, Cedric the Entertainer, and Anthony Anderson. One wonders what they’d be talking about at the barbershop in 2020. Maybe it’s time for another sequel?

Just before he gave his sword to the MCU and Star Wars universes, Jon Favreau made arguably his most personal film “Chef”, writing, directing, and starring in this 2014 comedy about a famous chef who has to find his passion again after falling from grace. A sweet and tender film, it features a great supporting cast and Favreau’s best performance.