Nearly 20 films into the superhero movie madness that is collectively known as the Marvel Cinematic Universe (MCU), Marvel Studios and its parent company Disney feel the need to keep topping themselves in terms of action, spectacle and noise.  “Captain Marvel” opens this weekend, and the big difference this time is that this marks the first Marvel movie to feature a standalone female hero, finally catching up to DC Comics’ “Wonder Woman” a couple of years back.

It’s not quite likely to induce “Wonder” or make you “Marvel,” but it’s a fun escapade enough of the time to please fans of bombastic popcorn flicks and it sets up lots of key elements for the  April 26 release of The Biggest Superhero Movie of All Time, “Avengers: Endgame.” That and the fact that she’s expected to be the great savior of the many Avengers who were wished out of existence at the end of their prior adventure, “Avengers: Infinity War”, makes this essential viewing for those planning to see “Endgame.” But for the average person, these are starting to get interchangeable and slightly annoying. 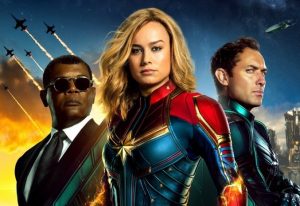 “Marvel” opens in a trippy, almost psychedelic fashion, as a woman named Vers finds herself trapped in a nightmare in which she’s trapped in a landscape decimated by battle.  She soon veers into and out of a reality that reveals she’s part of the Kree civilization on another planet. She spends her days training in hand to hand combat and assorted Jedi-style tactics under the supervision of Yon-Rogg (Jude Law), with her biggest obstacle being the fact that she can’t control her temper — yet wants to master the ability to shoot ultra-powerful photon rays at will.

When a mission to retrieve a Kree spy from enemy Skrull territory goes awry, a frantic (and frankly confusing) battle ensues that leads to her hopping in a pod-style spaceship and jetting off to a planet called C-53, aka Earth. Crash landing through the roof of a Blockbuster Video store in 1995, she finds she’s quickly forced into battle with a Skrull that has also crashed and has the ability to morph into anyone it touches.

This leads to both a funny and rousing high-speed battle on a subway train between Vers (who soon takes on the Earth alias of fighter pilot Carol Danvers) and the Skrull in the form of an old woman. The mayhem also draws the hot pursuit of government agents Nick Fury (Samuel L. Jackson) and Coulson (Clark Gregg).

As the agents force her to admit what’s going on, Fury is surprised to learn that both Vers (who winds up getting called Captain Marvel) and the Skrulls are in pursuit of an invention made by an Air Force scientist named Dr. Wendy Lawson (Annette Bening) that can enable movement at light speed. As they engage in their quest, they find that almost no one is what they seem on a surface level, and Vers learns that not only can she be powerful as a woman hero, but that sometimes keeping control of and channeling her emotions can be the greatest power of all.

“Marvel” stands the strong risk of feeling like a “been there, done that” proposition considering how many MCU movies there have been. But in hiring the quirky independent-filmmaker team of Anna Boden and Ryan Fleck — who have previously built their careers around indie, character-driven dramedies — as its writing-directing team, Marvel has found a way to look at this from some fresh angles.

The 1995 setting enables all sorts of nostalgic pop culture gags throughout, and for action scenes to be set to the strong pool of female-driven rock that was available at that time. Larson, an Oscar-winner for the harrowing indie drama “Room,” also brings both emotional depth and a great deal of fun sass to her turn as the heroine.

It also provides the fun of seeing Jackson as his younger self, thanks to the ace effects team digitizing Jackson’s actual image from that year into life atop his current body – resulting in him looking 25 years younger and starting the film without the eye patch that has become Fury’s trademark.

In fact, the most fun part of the film lies in its moments that answer questions including how Fury lost an eye in the first place — trust me, you won’t harbor anywhere close to a decent guess. Plenty of other Easter eggs abound throughout, but the only wish I have is that this and future MCU movies remember to keep the human side as strong as the super heroics and not devolve into murky mayhem when the action hits.

Like all the Marvel movies, the action is frantic but bloodless, there’s hardly any swearing and there’s no sex or nudity. So this is a morally reliable time at the movies too.  And if you are wondering if you can take grandkids if you have them, this is certainly a safe bet for those at least 10 and up.