Call Me Catholic – When a Kiss is Not Just a Kiss

Call Me Catholic – When a Kiss is Not Just a Kiss

Are you ever slightly flummoxed by the proper execution of the kiss of peace during Mass?  I am.

We kneel, stand, sit, respond and sing in conformity with the rest of the congregation during the liturgy, but when it comes to the kiss of peace, individual style and expression flourish. What ensues is often an awkward mess of exchanges.   The congregant to your right goes in for a hug while you simultaneously extend your hand for a shake, resulting in a near martial arts demonstration.  Adjusting, you turn to the stranger on your left and lean in for a friendly embrace while she pulls back rigidly with apologetic eyes that suggest she prefers no physical contact, please.  Germs, you know. 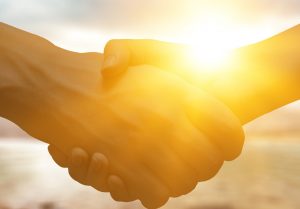 Meanwhile, parishioners around you are flashing the peace sign, bowing, waving, catching up on local gossip or looking straight ahead in the hopes of avoiding eye contact entirely.  The highly demonstrative are working the aisles feverishly, not letting one parishioner escape their notice.

It’s all very well intentioned, but a little distracting.  Starting sometime before we recite the Our Father, I find myself surveying the pews around me in anticipation of the kiss of peace; how far should I reach; will anyone notice I sneezed during Mass; what is the name of that woman in front of me?

I don’t think it’s what St. Paul and St. Peter had in mind when they instructed their audience of early Christians to “greet each other with a holy kiss,” from which we draw this component of our liturgy. It was probably a gesture shared between Jesus and his disciples. Paul and Peter then extended it to their communities. Christians, whether slave or free, were no longer strangers but shared a special bond in Christ made manifest by the exchange of the holy kiss. This public display in the first century set Christians apart from non Christians in their society. It served as a way to confirm the bond initiated in baptism

The holy kiss fell into disuse centuries later, but a version of it was restored to the Roman missal in 1970 as part of the liturgical reforms initiated by Vatican II. Regrettably, it came without a best practices manual.

Over the decades there has been some discussion about where the kiss of peace is best placed into the liturgy.   Some feel it should follow the Liturgy of the Word.  Like the Amen, the kiss of peace should be a pledge by the worshipers to incorporate into their lives what they have just heard in the proclaimed scripture readings, kind of like shaking hands on a deal. Others view it as a penitential proclamation – a gesture of making peace with their neighbors.  Toward that end, it is best said after the Our Father – as an enactment of the petition, “forgive us our trespasses as we forgive …. ” an expression of reconciliation immediately prior to Holy Communion.  This is where it resides today.

Frankly, regardless of where it lands in the liturgy, I believe most people in the assembly see the kiss of peace as a blessing they bestow on each other or simply as a chance to say hello to their neighbors.  Either way, I don’t think Americans are particularly skilled at this kind of thing.  We’re all over the map with our greeting protocol.

Observe how efficiently two Japanese people bow in a perfectly synchronized salutation.  Notice the intricate yet graceful choreography of two Europeans meeting on the street, bobbing from cheek to cheek without incurring injuries.

Then, stand in the doorway of an American household and watch closely as guests, even good friends, fumble and guffaw in a series of ill timed clumsy greetings.  One person demurely air kisses your cheek, while another robustly slaps you on the back.

I myself come from a long line of sloppy Irish smoochers.  We hug and kiss to a fault.  This unrefined manner of greeting is met with a great deal of resistance from people preferring to settle for a less gregarious exchange, such as, a tip of the hat, for example.  But there are even far more zealous American greeters who enjoy holding a welcoming clinch long into a conversation, sustaining an embrace for a good 10 minutes.  Shouting the command, “Release!” works well in aborting the embrace but it tends to offend.

I recall back in the day when I was a young career woman extending my hand to men who were obviously uncomfortable shaking hands with a lady. They would self consciously touch only my fingertips and gingerly tweak them as if taking the paw of a French poodle standing on its hind legs.  Most unnatural.

Our erratic American greeting practices have wrecked a bit of havoc on our Catholic kiss of peace.  In some congregations, it just feels like I’m dancing with someone who’s listening to different music.  We’re a bit out of synch.  I am not, in any way, dismissing the kiss of peace.  It’s a charming idea with a sacred history rooted in our Christian traditions.  But I believe we would appreciate it more if we understood how to practice it authentically. Our priests might occasionally review its origins and provide a few blessed guidelines for executing it with reverence and relevance.

Have I solved this quandary?  No.  But I think I’ve advanced the conversation.  Aren’t you glad we talked about this?  Whaddya say, group hug?