“Call Me Catholic” – The Dream that Went Downhill

“Call Me Catholic” – The Dream that Went Downhill

Newly into my 65thyear, I can boast that I have made scant concessions to age.  Admittedly, my age has given me a blessedly convenient excuse for avoiding dubious fashion trends. And, I suppose the sleep patterns I used to take for granted are causalities I attribute to the aging process.  But, by and large, I have few complaints about my advancing years and I have given up little on account of them.

With one dramatic recent exception.

Earlier this winter, at the bottom of a wretched snow-covered hill on a local mountain, I sobbed to my husband, Jim, that I was just too old to learn to ski.   It was a humbling confession.  One that I professed with anger and shame.  But it was a true statement. 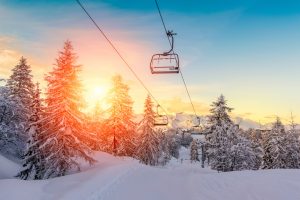 Since we were newlyweds 35 years ago, Jim has been trying to coax me into the sport of downhill skiing.  It was a subject that didn’t come up in our pre-Cana classes, but, turns out, skiing was pretty important to Jim.  I was game.  I had nothing against that beautiful sport.  But it had plenty against me. The turns, the boots, the treacherous descent from the chair lift, not to mention the voluminous jackets, were all designed to make me look like a fool.

With images of Claudine Longet racing downhill in glamorous stirrup stretch pants, I attempted it time and time again.  When our sons were little, I dallied with them on the bunny slopes until their skill level quickly eclipsed mine.  Hope springs eternal and I continued to try.   Occasionally, I got through a whole day of skiing but it wasn’t pretty like Claudine Longet.  It was tedium relieved only by muscle fatigue.

So recently when some friends asked us to join them for a little skiing vacation to Bend, Oregon, Jim looked to me expectantly.    I knew he wouldn’t want to leave me alone in the lodge all day while he skied with our friends; and he knew I wouldn’t be able to ski anywhere near their level.

I shrugged casually and nodded.  “Sure, let’s do it.”

“What if you tried another lesson – locally – before we go to Bend?  Get your sea legs and all that.” Jim said to me very carefully.

A week later, I was once again squeezing my tender feet into those torturous boots. It always feels like my ankle is going to snap as my toes make the deadly turn from opening to insole.  The young rental clerks looked at me with me pity as I left their counter and lumbered out to the killing fields.   I was not in a good mood.  Jim walked alongside me nervously chatting about how you just do this and do that – relax and let the skis do the work.     Would you tell an astronaut to just let the moon do  the work?    I was going up against a force of nature and I felt the profound vulnerability of my age.

We disembarked the chair lift on the simplest beginner slope. As usual, my legs stiffened, my arms cramped and slowly slowly I began to descend the mountain as though landmines were buried in every shadow.  I didn’t fall as I feared.  I never got up enough speed to fall.  But by the time I flattened out into safe terrain my body was covered in sweat and my knees were screaming.

Jim appreciated in that statement my rare concession to age.  He gently guided me to the bar and suggested I order a glass of wine (or two) while he took in a few more runs.

I felt strangely liberated in that admission of defeat.  I would no longer have to try to do something God had never intended me to do.

We subsequently enjoyed a great time in Bend with our friends.  As they took off for the slopes, I headed next door to the Nordic Lodge where I enrolled in a cross country skiing class, with boots that were considerably more comfortable and trails that were immeasurably more forgiving.  It was a happy compromise.

I began this story by boasting that I have made few concessions to age. That, my friends, in case you didn’t recognize it, was a very prideful statement.  And, as we Catholics should know well from Proverbs, “pride cometh before… the fall”.

Had I not humbled myself on that wee slope before Bend, my fall might have been quite literal – one that led to broken bones and a trip to the ER.    It was in my admitting my weakness that I found safety in my littleness.  Or my oldness.  And relinquished unrealistic, perhaps culturally shaped, expectations for myself.

Defeat reminds us that we are not exactly what we thought we were and prompts us to dig deeper, more spiritually, into how we want to be defined.   God spoke very clearly to me on my last exchange with skis and said, “You are not Claudine Longet.  Not in this lifetime.”

Ah, I love how God reminds me that I am not meant entirely for this earth.   Everything we do here is destined to determine how we live out the hereafter, and hopefully with Him on a loftier plateau than any chair lift can reach. My age should prove no obstacle toward that destination unless, of course, I choose to deny it.