Call Me Catholic: Lessons from the Moon

Call Me Catholic: Lessons from the Moon

When Frank Sinatra recorded “Fly Me to the Moon” in l964, he was singing metaphorically, of course.

“Fly me to the moon

And let me play among the stars

On Jupiter and Mars.

In other words, hold my hand

In other words, baby, kiss me.”

He was crooning about the intoxicating allure of romantic love.

But Ol’ Blue Eyes also was heralding another kind of love affair spreading across America at that time:  passion for the emerging Apollo missions to the moon.

If you would like to fall in love again or for the first time with that dramatic chapter of American history, go see “Apollo 11,” a documentary that debuted in theater’s last month about the flight that put men’s first footprints on the moon.  It held my husband and me spellbound for 90 minutes.

Composed almost exclusively of news reels and rarely seen archival material, the film documents the nine days of the Apollo 11 moon mission, beginning with terrifying close up footage of the massive rolling tire treads that carry the Saturn V rocket to the Cape Kennedy launch tower.   Engineers stride alongside it, illustrating just how enormous that rocket was and how tiny the crew capsule at the top of it was. It’s pretty awesome.

We don’t take much notice of awesome in the world today.  There’s a lot of fake awesome, as in, “dude, this pepperoni pizza is awesome.”  But real awesome takes your breath away.

Americans held their breath as they followed Neil Armstrong, Buzz Aldrin and Michael Collins into space in July of l969.  The film captures that American audience.  Footage pans across families camping on the nearby seashores, sitting on top of their cars, holding small children on their shoulders to witness a blast off into space that would burn nearly 5 million pounds of fuel.   You can see in the faces of those expectant Americans a sense of wonder.  And excitement. And unity.

We all held our breath through the epic moments of that excursion into space.  I remember as an adolescent watching on TV when Neil Armstrong descended from the ladder of the lunar module onto the moon’s surface and then spoke his iconic words, “That’s one small step for man; one giant leap for mankind.”

I ran outside that night and stared up at the moon, considering its distance, its surface and the pioneers who had stepped onto it.

How often has recent technology prompted us to stop and contemplate its achievements with awe.  I mean, it is pretty darn amazing that my diabetic son can now check his blood sugars instantly through an app on his phone. Or that with a few taps on the screen, grandparents can enjoy a real time face to face conversation with their grandchildren 10,000 miles away. And what about that lovely stranger’s voice giving you precise directions to exactly where you’re going?   We’re more likely to fume and feud about the occasional malfunction of these conveniences. It’s not likely we’ll be employing calm phrases like, “Houston, we have a problem here,” in response to a YouTube that’s loading too slowly.

Early in the film, we watch the three astronauts being groomed and dressed in their spacesuits.  Their pensive expressions speak to the enormity of their task.  The men and women who suit them are equally aware of the importance of each tiny detail in their duties.  There is something so beautiful in that collaboration; so human.

The technology that landed us on the moon also made us aware of our humanity.   Our smallness in God’s universe.  And our instinctive response to it was to cling together.

Most modern technology doesn’t work like that.  It preys more on our appetite for self sufficiency and individual satisfaction.  It too often pulls us away from community and empowers us with a sense of being God. 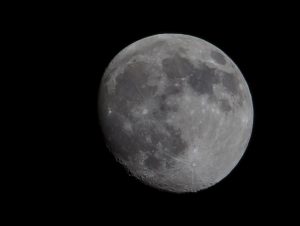 Do you remember the character Ed Harris played in the movie, “Apollo 13”?  That mission didn’t enjoy the flawless flight of Apollo 11 and Ed Harris portrays Gene Kranz, the cool headed flight director at Mission Control who talked the astronauts through their near disaster.  I read recently that the real life Gene Kranz is a life-long Catholic who credits his faith for his legendary NASA career.  On his desk, among the military and space memorabilia, is a framed photo of three religious sisters.  Those three women arranged his scholarship to aviation school which set him on his course toward making history at NASA.

“You feel that you’re in control of your life, but I’m not really in charge,” Kranz says in the article. “There is some master plan that, without knowing it, I have been following throughout my entire life.”  He continues, “We pulled off a miracle in Apollo 13.  We never should have been able to solve all the problems we faced.”

You won’t often hear NASA scientists attributing their progress to miracles, but it’s there in the subtext. In the movie “Apollo 11” we see expansive shots of the 500 men (and one woman) who comprised mission control, mostly clad in short sleeved white shirts and skinny black ties.  Sure, jokes were exchanged and casual chatter animated radio silence, but while the three astronauts navigate outer space at this team’s direction, a mood of reverence and respect prevails.  There is no exhibition of bravado, no chest bumping or fist pumping.  You sense that they collectively know they are informed instruments of a higher power.

In addition to leaving behind their footprints on the moon (which are still there because the moon lacks the wind to erase them), the Apollo 11 astronauts left behind a plaque which we see in the film. It reads,

We came in peace for all mankind.”

Try to read those words without choking up.  The sentiment is so pure and noble, a declaration worthy of man’s best nature.

There is much to learn from this fine documentary on the Apollo 11 mission and I’ll be pondering its lessons and inspiration for a long while.  You won’t ever find me in a line to have someone “fly me to the moon,” Mr. Frank Sinatra, but I’ll still watch with awe and wonder as others do.