BLACK AND TAN AND SAINT BRIGID – My Catholic Kitchen

BLACK AND TAN AND SAINT BRIGID – My Catholic Kitchen

Today, February 1st, is the feast day of Saint Brigid. She is also known as “the Mary of the Gael.”

She was responsible for erecting the first nunnery in Ireland. She was born around 450 AD into a druid family. She was the daughter of Dubhthach. He was a court poet to King Loeghaine. It was also believed that he was of noble blood. She grew into a beautiful woman and she had lots of men ask for her hand in marriage.

Her father for many years hoped that she would marry someone of noble blood. Eventually she convinced him to allow her to become a nun. Together with a group of other women they established a nunnery in Kildare Ireland. It is about twenty miles west of Dublin. It was known as The Church of the Oak, because a large oak tree stood at the place where the convent was built.

It originally was a pagan shrine where a sacred fire was continually burning. Instead of putting out the flame, her and the other nuns kept it burning as a symbol of Christianity. Processes similar to this is how druidism in Ireland gave way to Christianity with very little opposition.

There are many legends about her and most of them spoke about her generosity when it came to the needy. Because Saint Brigid was Irish, I thought it would be fitting to enjoy a glass of Back and Tan on her feast day. 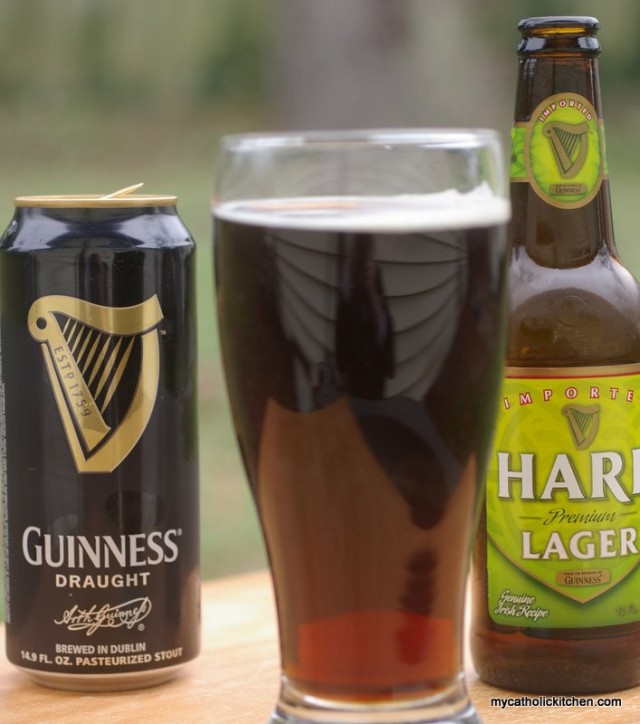 DIRECTIONS:
Fill a stein half full of Lager. Pour Guinness over a spoon slowly until the glass is full. If done correctly the Guinness will float on top and the Lager on the bottom, hence the name Black and Tan.

Peace be with you,

Veronica (Vonnie) is a widowed Catholic mom and a Coastal Virginia based food writer, a not so perfect Weight Watcher follower and animal wrangler, with a constant yearning for freshly baked bread, Krispy Kreme donuts, fried chicken and setting off the fire alarm in the pursuit of the perfect recipe.