Ant-Man and The Wasp

Ant-Man and The Wasp

One of the many refreshing qualities that have helped the Marvel superhero movies dominate the global box office over the past decade has been their strong sense of humor. Rather than merely being brooding and morose like the DC films such as “Man of Steel” and “Batman vs. Superman,” the Marvel Cinematic Universe (MCU) from “Iron Man” onward have infused their adventures with laughs from both witty lines and plot-driven moments.

In 2015’s first “Ant-Man” movie, the comedy took precedence over superhero theatrics  in focusing on the story of a cat burglar named Scott Lang (Paul Rudd) who had to find his inner hero and help his mentor, Dr. Hank Pym (Michael Douglas), pull off a heist that could save the world. Aside from hilarious dialogue, the film zipped along with highly original action set pieces centered upon Hank’s ability to make Scott gain more strength as he grew ever tinier.

It was a combo that made that first film my personal favorite among the entire MCU, as I preferred the comedy and humanity of it and the fact it wove in the heist genre— including a colorful and diverse supporting cast of Scott’s fellow thieves — to great effect. All of these elements came together to create a film that thanks to Rudd’s affable performance was the most relatable of all the Marvel heroes. 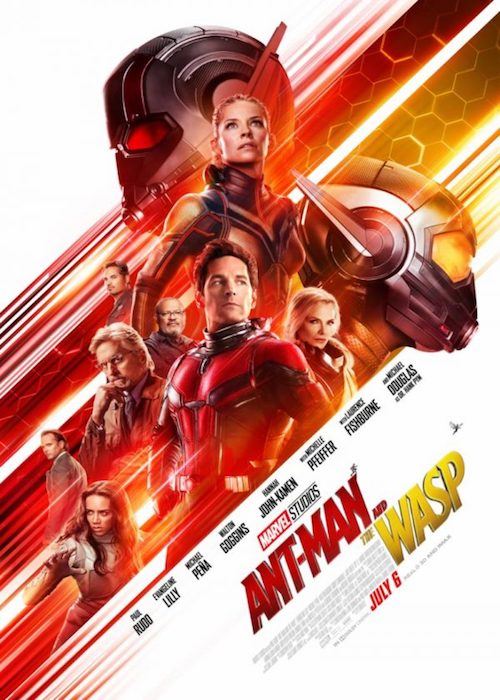 Now the sequel, “Ant-Man and the Wasp,” is coming out this weekend, and returning director Peyton Reed and his team of writers has amped up the comedy even more. They have also added Laurence Fishburne and Michelle Pfeiffer to the mix, with Fishburne playing a former colleague turned scientific rival of Pym’s and Pfeiffer playing Pym’s wife Janet and mother to their daughter, Hope (Evangeline Lilly).

At the end of the first “Ant-Man,” it was revealed that Hank had managed to develop similar shrinking and strength powers for Hope and crafted a super-suit for her as The Wasp. In the new film, she’s been upgraded to a full-on co-star and sidekick of Scott.

The mission is more personal this time, as Hank and Hope believe that Janet didn’t die amid an experimental trip into a quantum molecular state but rather merely became trapped in that parallel state of existence. Hank and Hope want to risk everything to find Janet and bring her back to the real world, with Scott jumping in on it despite the fact that he’s trapped by house arrest for violating his probation when he engaged in the superhero battle royale in “Captain America: Civil War.”

Scott wants to help as a means of rebuilding his frayed friendship with Hank and rekindle his romance with Hope, but there are several bumps to contend with. An FBI agent (Randall Park) is relentlessly trying to prove that Hank is violating his house arrest, a mysterious figure called Ghost (Hannah John-Kamen) keeps showing up at the worst moments to fight them over access to the quantum realm, and a sleazy arms dealer (Walton Goggins) is determined to have Hank’s bridge to the quantum realm at all costs.

Having to contend with all these challenges ensures that the film is relentlessly paced and never boring. Yet the fact that the arms dealer is a buffoon and Ghost turns out to have a surprisingly sympathetic reason to capture the bridge means that there’s not enough tension from villainy to really sustain viewer interest at a pitch-perfect level.

Instead, “Ant-Man and the Wasp” proves to be a fun romp, but not one that’s completely compelling to blockbuster fans at the level of the “Avengers” movies. Rudd does a great job again and it’s fun to see Douglas getting a high-profile role in the twilight years of his career, but Pfeiffer barely gets any screen time in this go-round and her absence is glaring considering that her addition is being hyped.

The biggest breakthrough in the film is Lilly, who proves to be slyly sexy in addition to engaging in plenty of inventive ass-kicking heroics. But the biggest star of all is the effects team, which might seem to be an obvious kudo to give in a superhero film, but when one considers that this movie includes giant Pez dispensers as weapons and Ant-Man turning into a 60-foot-tall menace to the arms dealer’s getaway boat, it is high praise indeed.

Anyone who’s seen the zillions of Marvel films released in the past decade will know that there’s nothing offensive to worry about here, either. There’s hardly any foul language, the action is non-stop but goofy fun, and there’s no sexual content to be riled up about either. This may be focused on a tiny hero, but these days, clean clever fun at the movies is a huge accomplishment indeed.