A BEAUTIFUL DAY IN THE NEIGHBORHOOD – Movies

A BEAUTIFUL DAY IN THE NEIGHBORHOOD – Movies

Everyone who grew up in America, or was a parent here, between 1968 and 2001 was likely touched by the classic children’s TV series “Mr. Rogers’ Neighborhood,” starring a soft-spoken Presbyterian minister named Fred Rogers. Rogers was concerned about the impact that television could have on young minds and wanted to create a show that could teach them profound life lessons in a gentle way.

Along the way, he developed a reputation as a virtual living saint, with his sweet nature spilling over into his off-camera life as countless people shared stories of his incredible kindness to them. But in 1998, when an Esquire magazine reporter named Lloyd Vogel (a fictionalized version of actual reporter Tom Junod) was assigned to write a short tribute to Rogers for a special issue about heroes, his skeptical nature led him to want to prove that the idyllic icon had to have a hidden dark side.

Instead, he found himself transformed for the better by his time with Rogers, and the resulting article became a classic cover story entitled “Can You Say…Hero?” The new movie “A Beautiful Day in the Neighborhood” recounts Rogers’ and Vogel’s encounters and eventual friendship, while providing heartwarming lessons for all who view it – making it a great holiday date film.

The movie opens with the beloved, piano-driven theme song of the TV series, with Tom Hanks playing a pitch-perfect version of Rogers as he comes bounding into the iconic house and sings the song in full. But soon we realize that the film is going to really follow the story of Vogel, as Rogers shows a picture board to his viewers with photos of such beloved “Neighborhood” regulars as Mr. McFeely and Lady Aberlin smiling— before focusing on a sad picture of Vogel (Matthew Rhys). 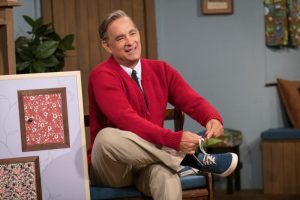 Tom Hanks stars as Mister Rogers in TriStar Pictures’ A BEAUTIFUL DAY IN THE NEIGHBORHOOD.

Rogers is actually talking to the movie’s viewers, noting that we all need to learn to forgive ourselves and those who have hurt us. The scene’s tone matches the way he actually imparted lessons to his young viewers, but then the story skips to Vogel getting the assignment to write about Rogers after winning a major writing award and starting a fight with his father (Chris Cooper) at his sister’s wedding.

Vogel is a notoriously hard-nosed investigative reporter, receiving the assignment to write about Rogers because everyone else on the Esquire heroes list wanted to hear from him. But he finds that Rogers is unusually eager to meet, and soon finds himself jetting back and forth between his New York City home and the TV show’s base in Pittsburgh as he’s ever further drawn into the host’s world and mindset.

At the same time he forms an ever-closer bond with Rogers, Vogel is pushing away his own dad despite his efforts to make peace both for the wedding fight and for the fact he abandoned his family years ago when his wife was dying painfully from cancer. As Rogers keeps gently pushing him to confront his emotions and make peace in a healthy way, he finds that the man really does have a magically healing effect on people – even as Rogers subtly dodges questions about his own personal sadness.

Focusing on Vogel’s transformation, rather than simply being a straight-up biopic of Rogers, might seem disconcerting at first but it ultimately works wonderfully. And it was wise for writers Micah Fitzerman-Blue and Noah Harpster to take a different approach to Rogers’ life, considering that the hit documentary on Rogers, “Won’t You Be My Neighbor?”, came out just last year.

Director Marielle Heller made a splash on the arthouse film scene last year, when her biopic of notorious New York forger Lee Israel called “Can You Ever Forgive Me?” earned Oscar nominations for both Melissa McCarthy and Richard E. Grant. This is the complete opposite in spirit from that terrific yet sour tale of a woman who was a misanthropic loner and a con artist to boot.

Heller laces the main story of Vogel with interspersed bits from the fictional “Neighborhood” episode in which Rogers is talking about him. She also recreates a few of the classic songs from the kids’ show and beautifully features a couple of powerful sequences in which Vogel is astonished to witness firsthand the effect Rogers has on even large groups of people on the subway or in a restaurant.

Rhys and Cooper pull off remarkable acting feats by making believable transformations from being men who could easily be seen as obnoxious jerks at the beginning into being lovable yet realistically troubled humans. Hanks reveals less on the surface, always showing Rogers gentle and smiling in public, but hiding a deep reservoir of anger that he won’t explain in his private life.

His ability to bring the lovable icon to life more than 15 years after Rogers’ death from stomach cancer in 2003 is a gift. So is the film’s straightforward portrayal of Rogers’ faith, showing him as a true man of God who prayed each night on his knees, softly calling out the names of people like Vogel he cared about deeply.

With its positive message of familial reconciliation, “A Beautiful Day in the Neighborhood” is a beautiful way to spend the holiday season at the movies.