Few rock stars have had as big an impact on the world stage as Elton John, who has had more than 50 Top 40 hits and sold 300 million records since breaking out nearly 50 years ago. He’s also had a life story that few can match, with epic battles with sex, drug and alcohol addiction alongside his worldwide fame and fortune en route to finally finding true love and sobriety in the early 1990s.

The new film “Rocketman” depicts a surprisingly unflinching portrayal of these struggles, with Taron Egerton of “The Kingsmen” spy comedies delivering a stunning performance as the musical legend. Following on the heels of the massive success of “Bohemian Rhapsody” and its depiction of Queen lead singer Freddie Mercury’s similar troubled life, it hopefully will help build a trend of more musical biopics. 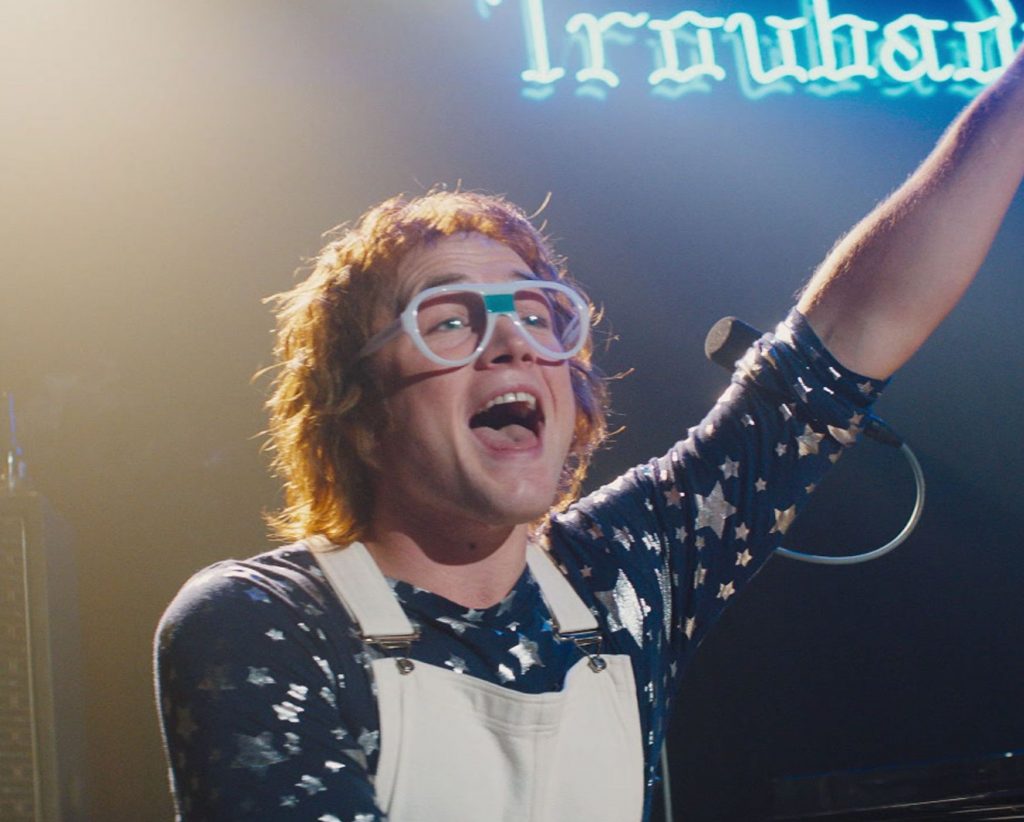 The movie opens with the stunning visual of a bloated, middle-aged Elton John (Taron Egerton) wearing an elaborate red devil costume with horns on his head and feathered wings. Writer Pete Bell and director Dexter Fletcher (who took over the troubled production of “Rhapsody”) aren’t setting up a celebration of devilish excess, however. Rather, Elton is entering an Alcoholics Anonymous meeting, and his devil costume is a symbol of how corrupted he feels inside, openly admitting that he’s a sex addict, drug addict, alcoholic and bulimic. Moments later, he sees a vision of himself as a five-year-old boy (with his birth name of Reginald Dwight), and as he starts singing one of his classic pop songs, Elton busts out of the meeting with his fellow addicts and group leader running behind, dancing through the streets of his childhood.

This dazzling opening has the silly charm and rock and roll energy of the classic musical “Grease,” and it establishes quickly that this will be no ordinary biopic. Hall and Fletcher have conceived a musical fantasy style for the movie, which bounces back and forth between the anguished confessions Elton makes in his group meeting and various periods of his childhood and adult rise to fame.

The core emotional impact of the movie lies in Elton’s quest for love, as heartbreakingly shown as his 10-year-old self sings his late-period ballad “I Want Love” after his emotionally distant father tells him not to tap his fingers on the family dinner table. In a brilliant move, each family member including his father, his condescending and careless mother, and his saintly grandmother sings a verse, revealing the inner pain that made them turn out the way they are.

Salvation comes in the form of music, as young Reginald is seen playing classical masterpieces by ear from age 5, with his grandma encouraging his artistry all the way to receiving a scholarship from the Royal Academy of Music. As he learns to properly compose, he is told by a record executive that he should put lyrics to his beautiful tunes – but he can’t think of anything to say. The exec hands him an envelope of songwriter Bernie Taupin’s lyrics and tells him try to write music for them. Thus, a 50-year magical partnership is born, with the heterosexual Bernie (Jamie Bell) providing the platonic love and acceptance that Reginald (who renames himself Elton John after a bandmate named Elton and John Lennon) never had before. That friendship gives him newfound confidence, and soon they are on a rapid rise to worldwide fame and fortune. But Elton finds that material wealth doesn’t bring happiness, as he can’t seem to find a strong relationship while his manager (Richard Madden) lures him into an affair that’s manipulative and shallow.

Continually rejected by his parents no matter how successful he becomes, Elton falls into a horrible cocaine and alcohol addiction. Through another of the movie’s innovative musical fantasies, Elton is seen symbolically engaged in a life of drug-fueled encounters that only end when he winds up overdosing and in need of rehab. From there, he has to find the way to true forgiveness, happiness and love.

As Elton, Taron Egerton (“The Kingsman” movies) does a phenomenal job, setting himself up for an Oscar to match the one given to actor Rami Malek for his portrayal of Freddie Mercury in “Rhapsody.” His performance is an emotional rollercoaster of extreme highs and lows, but is always underpinned by a heartbreaking wish for true acceptance and love.

Jamie Bell as Bernie Taupin is also outstanding, and the movie’s depiction of their friendship is an excellent example of brotherly love that stands true through a myriad of crises. With 20 of Elton John’s greatest hits used in endlessly inventive musical numbers, the movie is incredibly entertaining as well as a deeply emotional experience.

Despite some media hype that “Rocketman” would actually show homosexual activity rather than implying it the way “Bohemian Rhapsody” did, the movie has one such scene that cuts away as soon as Elton and his manager fall into bed together. No nudity other than bare chests and backs are shown, and one other scene cuts away as they kiss passionately in a closet. (While most viewers will have an opinion on this), the scenes are shot with great discretion.

What’s remarkable about the movie’s depiction of John’s lifestyle is that it shows that when engaged in promiscuity, or the relationship in which his manager cheats on him and emotionally abuses him, he’s anything but “gay” or happy. Combined with the extremely negative depiction of his drug and alcohol abuse, the movie actually has a fairly traditional moral stance with this extreme subject matter.

In the end credits that update viewers on John’s life over the past 30 years since the movie ends with his sobriety. John is shown having married a man named David Furnish 25 years ago and having twin sons born through a surrogate. Thus, the movie does accept and condone his current lifestyle, but that should not come as a surprise considering Elton himself is an executive producer on the movie. But the film is so emotionally powerful and entertaining that most adults should be able to overlook this amid the overall experience.