In a nation that might be more divided than ever, a true-life tale about bringing people together might just be the kind of movie we need most right now. Thankfully, the new film  “Green Book” has arrived, taking viewers on a journey through the 1960s South that features great performances, snappy dialogue,  terrific music and a story that is as timely now as it was more than 50 years ago.

The film centers squarely on two lead performances: Viggo Mortensen as a New York City bouncer with a boisterous Catholic, Italian-American family who calls himself Tony Lip, and Mahershala Ali as a rich African-American pianist named Dr. Don Shirley, who lives a refined but very lonely life in a swank apartment above Carnegie Hall. The year is 1962, and Shirley has become a superstar performer in the Northern states but is determined to break through in the South with a tour that will take him into some of the most racist hotbeds in the nation. 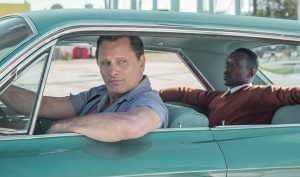 Shirley knows that if a black man is pulled over while driving through many corners of the South, the consequences could include arrest, a beating and even death. Thus he needs a tough white guy to be his driver and bodyguard on the eight-week run of shows, which feature Shirley and the two other white members of his jazz-classical combo playing for white elites who treat Shirley great at the shows but make It clear he’s looked down upon whenever he’s off the stage.

Tony has long been a scrappy bouncer at the Copacabana nightclub, but needs to find work to make it through the holiday season when a wild brawl he helped start shuts the  hotspot down for two months of renovations. Tony harbors a casual racism common in seemingly open-minded whites of the era, discreetly throwing out two glasses in his home after seeing that African-American workmen drank from them.

Forced to bond together while on the road, Tony learns to loosen up and love Don, with a special appreciation for his stunning piano playing abilities.  Don, meanwhile, learns to give fried chicken a shot while also learning about the looser wild stylings of piano-playing rockers Little Richard and Chubby Checker. On a deeper and more touching note, Don teaches Tony to have higher life standards for himself and helps him craft eloquent love  letters to his wife that reinvigorate his marriage.

There are troubling moments throughout the journey as the men contend with racism in various forms and Don turns out to have a deep-seated secret of his own. But this is a movie that is filled with a goodness of spirit and a rich  heart, that shows pretty good people striving to do better, and which affirms the universal allure of great music to transcend one’s boundaries and bond across all manner of cultural differences.

There is also a subtle appreciation of the great American landscapes and the appreciation of the simple things that make this country so special, such as Tony’s boyish eagerness to have Kentucky Fried Chicken in Kentucky. Mortensen and Ali deliver masterful performances that are almost certain to be Oscar contenders this year.

Tony’s Catholic faith is established early in a home with prominent crucifixes and filled with family prayer at the dinner table. Aside from the low-key racism he has to learn to overcome, he is positively portrayed as a good man with bedrock values.

But the real surprise of “Green Book” is the man who directed it. Bobby Farrelly spent 20 years working with his brother Peter as the kingpins of raunchy comedies, presenting the planet with gross-out comedy classics including “There’s Something About Mary,” “Dumb and Dumber” and “Kingpin,” but as audiences’ tastes finally matured and veered away from their risqué fare, Farrelly realized the need to reinvent his career or watch it slip away.

His reinvention here is splendid, revealing a gift for the full range of human emotion and the ability to find frequent laughs as well as chuckles and well-placed drama. “Green Book” might seem like race-flipped “Driving Miss Daisy” crossed with an interracial “Planes, Trains & Automobiles” but those are two timeless classics, and very good company indeed.