War is a terrible experience that can nonetheless bring out the best in those who fight. Inspiring courage and tenacity under the worst of circumstances, the heroism that results offers inspiration to those who hear their tales of rising to the occasion or giving the ultimate sacrifice.

The new movie “1917” provides a remarkable example of just that, by following the harrowing nine-hour journey of a British soldier in WWI who has to race against time to deliver a life-or-death order to avoid marching upon German forces whose seeming retreat is actually setting a trap for them. Directed by director Sam Mendes, who honed his action-shooting abilities at the helm of the last two James Bond movies “Spectre” and “Skyfall,” “1917” has a lot more gravitas than those ace espionage flicks but still provides plenty of nail-biting, edge-of-your-seat thrills along the way.

The film kicks off with its two young lead soldiers, lance corporals Blake (Dean-Charles Chapman) and Schofield (George Mackay), called in by their commander for what they hope will be the news that they’re about to be sent home or at least receive a long reprieve from the battlefield. Instead, they quickly learn that a dangerous assignment is afoot: the commander has learned through intelligence that the enemy German forces are setting a terrible trap for their fellow British forces on the front lines, and the two brave souls are being asked to warn them that what seems like a German retreat is in fact nothing of the sort. 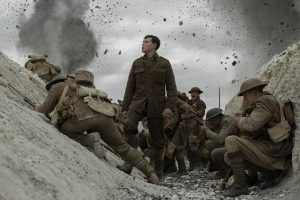 Rather, the Germans who appear to be retreating in France and Belgium are in fact waiting to trap the British frontline forces. Blake has been chosen because his brother is in the endangered battalion and the commander feels that will inspire him to complete the mission at all costs. Because Schofield has already been honored with a medal for valor and is Blake’s close friend, he is teamed with him for much-needed moral support and reluctantly goes along.

And thus, an incredible trek begins as the two men dodge enemy fire against the British forces and traverse numerous deep bomb craters only to find that one set of German soldiers have indeed abandoned their post. As they explore the trenches looking to see if anyone’s waiting behind to entrap them, they wander into a cave and set off a devastating tripwire explosion that nearly buries Schofield alive.

Despite overcoming that near-death experience, Blake is soon killed by a German pilot who stabs him after making a stunning crash landing just feet away from the pair. That leaves Schofield alone to make the rest of the journey, making it even more arduous as he repeatedly comes under fire, nearly drowns after jumping in a river to make an escape, and dodges more Germans while running through the dark through the burning ruins of a church and its surrounding town.

The tension is extreme throughout as director Mendes and his co-screenwriter Krysty Wilson-Cairns leave viewers wondering down to the wire if the mission will be accomplished. There are some touching moments of humanity mixed in as well, as Schofield takes time to help a young Frenchwoman care for a baby she found, and in another scene he stumbles across a Christian service in which a group of British soldiers are singing a hymn about crossing the River Jordan.

The choice of relative unknown actors Mackay and Chapman is a smart one, as the fact that they don’t carry preconceived star-power images helps draw viewers into the plight of these Everymen soldiers. Mackay is particularly a marvel as Schofield, as he not only has to convey a full spectrum of emotions but also withstand the harrowing physical action as well.

But it’s cinematographer Roger Deakins who’s the biggest standout of the film, as he and Mendes found a way to make “1917” look and feel like it was shot in one continuous take. While that’s impossible to actually achieve for two hours straight, the pair used trick angles and extremely subtle edits between extended sequences to make it appear that way.

The result makes viewers feel like they’re smack in the middle of the action in a way that’s truly rare for a film to achieve. And the fact that they were able to pull off several minutes at a time with all the running, jumping, and bullet-dodging involved, especially in the film’s more hectic second half, is still an impressive feat in itself.
There are some gruesome shots of dead soldiers rotting scattered throughout the film, but they’re shot quickly and as tastefully as possible considering the circumstances. The war violence itself is also handled without being over the top. There are also several uses of Jesus’ name in vain and multiple “f” words in the movie during particularly tense moments, but overall “1917” has a strongly moral tone to it considering the undeniably heroic nature of the mission and the moments of kindness and faith mentioned above.

Ultimately, this is a stirring and patriotic story that will be particularly pleasing to history and war movie buffs. It’s a solid, thoughtful, adult tale that will linger in memory, and that’s more than one can say for a lot of the films in theaters these days.